‘Kristy’ Makes for a Thanksgiving to Remember [Rotten Outlook] 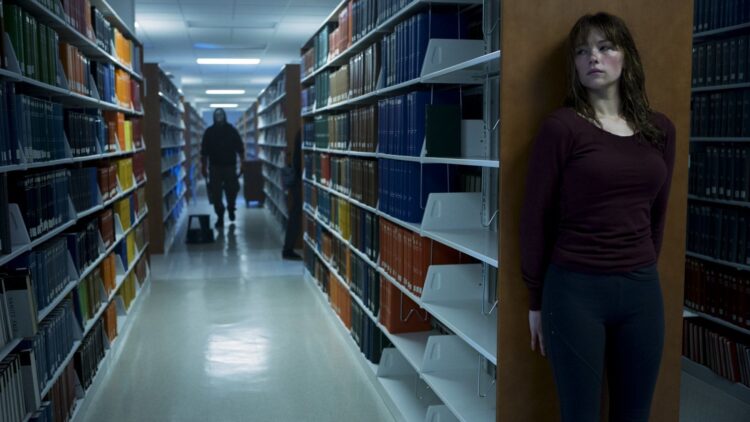 Among the pantheon of great horror subgenres, Thanksgiving is more often than not shafted. Like a plate of leftovers for some sixth cousin thrice removed, it’s an almost unwelcome holiday setting. It has to be, given just how few horror movies take advantage of it. The familial tension and generational conflict have been fertile ground for indie dramas and tentpole comedies. But the horror genre is averse to it, no different than a grandparent who can’t keep their conspiracy theories out of pre-dinner chit-chat.

Thanksgiving is often contextual, as was the case with Escape Room, or nebulously alluded to, festive in spirit but not actuality– looking at you, You’re Next’s anniversary dinner. There is, too, Blood Rage, but one can only watch Blood Rage so many times. That’s a lot of times, sure, but everything has its limits. Bless director Oliver Blackburn, then, for Kristy, a movie rotten in score but not in Thanksgiving spirit.

College student Justine (Haley Bennett, wickedly captivating in Swallow) is alone on campus over Thanksgiving break. She is the kind of abstract poor movies are so accustomed to conceiving. She can’t afford to fly home for the holiday weekend, though her poverty is never sufficiently explored beyond that. However, Kristy takes great pains to remind audiences that Justine is (I gasp) using financial aid. Nonetheless, she runs afoul of a gang of outcasts at a local gas station. She’s soon targeted by the maniacs who collectively insist on calling her “Kristy.”

Critical reviews are sparse. Kristy was an unfortunate casualty of The Weinstein Company restructuring, though it predates the Weinstein scandal. After a televised release on The Lifetime Channel, Kristy was dumped on Netflix with little fanfare. With a Rotten Tomatoes audience score of just 41%, Kristy wasn’t just ignored-it was maligned. It’s a shame since Kristy is not only a preeminent Thanksgiving-set slasher. It’s a genuinely good slasher, period.

There are beats of Kristy that match some of the best the genre has to offer. Late in the film, Kristy goes full Gothika (or Dr. No for Bond fans). She hides in the gym’s swimming pool, successfully emerging to stab one of her pursuers before drowning him in the crimson water. In fact, its Lifetime premiere belies just how gruesome and visceral Kristy is. Too often, these rough-and-tumble slashers– either by dint of budget constraints or artistic incompatibility– play it too restrained. Sure, no one needs savagery on the level of Inside, but a slasher movie has to slash, and Kristy is all too keen to deliver. There are snuff films, bodies lit ablaze, and bats wrapped in wire. Kristy is brutal and taut, a movie that fully delivers on the full breadth of its promise.

Better yet, outside of some genre convention, Bennett’s Justine is more than capable of defending herself. She certainly isn’t You’re Next’s Erin– and, really, no one is. But she consistently makes wise choices, deftly identifying when to hide and when to fight, ably warding her attackers off without transcending into the realm of a fantastic victim. Some of that is attributable to Bennett herself, an exceptionally talented yet criminally underrated actor, delivering the kind of performance that transcends what the material needed.

The maniacs themselves excel, too. Ashley Greene’s genre efforts have been hit or miss. I don’t imagine anyone is keen to defend The Apparition, but Greene delivers some of her best work here, acting against her Twilight lineage as a ruthless gang leader. Crille Forsberg’s cinematography is appropriately stark, using the space of the college campus to isolate Justine and her attackers in the same frame despite being a football field’s distance apart. Blank space is used to constrain and it’s exceptionally claustrophobic and tense.

The Thanksgiving holiday can be isolating, even for those with family and friends. Celebrations together can leave even the most steadfast individual broken down and tired, battered beyond belief on account of the bickering and tension. Kristy taps into that, conjuring a nightmarish landscape where holiday sequestration is truly deadly. It’s wickedly sharp, sensationally acted, and confoundingly overlooked. Kristy is a knife’s blade of slasher wit and apathetic millennial savagery. It’s a cornucopia of fresh Thanksgiving thrills and chills. Don’t miss it.