'Censor' joins a tradition of horror films that reflect along with our relationship with media as a horrific mirror for our traumas. 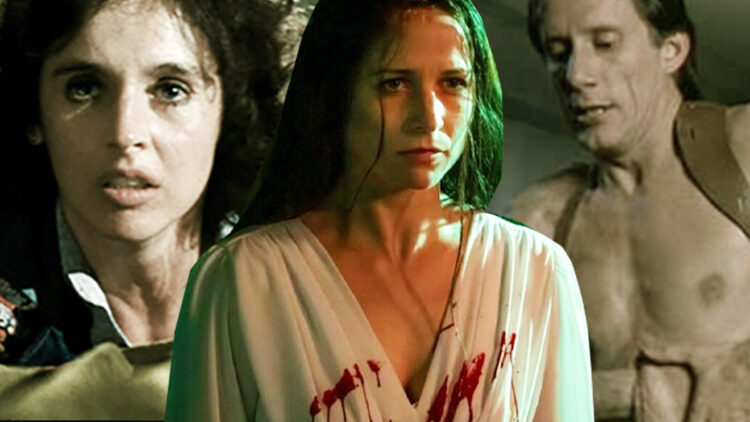 One of the most important things about Censor is its period setting. It takes place at the height of the moral panic around video nasties in the UK. This setting creates the perfect backdrop for a narrative about mass media, moral panic, and the dark side of a politics of “personal responsibility.”

Censor is told from the perspective of Enid (Niamh Algar), a film censor who determines if a horror film is suitable for public release. She begins to see things that look suspiciously like her own memories in some of these films. The lines between reality and fantasy start to blur as these images take her down a dark road of obsession. The context of video nasties is vital for the film’s story and its stylish, lurid production design. It gives director Prano Bailey-Bound the perfect way to explore the gap between fact and fiction, and what happens when they become intertwined.

In the background of this psychological exploration of trauma, escapism, and projection, there’s a political undercurrent concerning the limits of the conservative idea of “personal responsibility,” and the power that we give the things that scare us. Early in the film, the press criticizes the censors’ office after a heinous crime is supposedly inspired by a film deemed suitable for release by Enid and her colleagues. The media circus plants the seeds for the film’s story, and its relationship between mass media, mass hysteria, and individual trauma.

Fittingly, one of the films that share this thematic ground is video nasty The Witch Who Came From the Sea. Directed by Matt Cimber, this film deals with the relationship between trauma and mental projection when it comes to mass media. Like Enid, Molly (Millie Perkins) has a darkness in her past that she struggles to articulate. Even more, she thinks images on her TV are actually images from her past. What first may or may not be Molly’s morbid dreams — a violent seduction, a beach strewn with corpses — actually begin to appear on newscasts. Even Molly herself seems unaware of where one thing ends and the other begins.

At the heart of Witch is Molly’s relationship with her deceased father, who she insists was “lost at sea.” It’s also the cause of the gulf between how he’s remembered by Molly and her sister, as her sister insists that he was “an evil bastard.” Meanwhile, when the sisters talk, the TV is often on in the background. This distracts Molly as she watches the actors in ads, insisting they “look like Papa.” Here, Molly is using these actors to fill in the blanks of her own past.

In Censor, Enid does something similar. While assessing the film Don’t Go into the Church, she sees an actress who she thinks looks like her sister would as an adult. When they were children, Enid’s sister disappeared under mysterious circumstances. Variations of this pivotal moment play out in Enid’s mind throughout the film.

There’s a loaded double meaning to projection in the context of Censor and Witch. First, there’s what is literally projected onto a screen. Then, there are the things that we project onto the world around us, whether it’s Molly’s false and idealized memories of her sea captain father, or Enid’s constant desire to find and set right the moment in her past where everything changed. A colleague tells Enid, “people construct stories in order to cope.” It’s a line that feels like an echo of Joan Didion’s opening to The White Album, where she reels off some of the narratives we fall back on in order to make sense of the world:

“The princess is caged in the consulate. The man with the candy will lead the children into the sea. The naked woman on the window of the sixth floor a victim of accidie, or the naked woman is an exhibitionist, and it would be ‘interesting’ to know which.”

Films like Censor and Witch understand the relationship between the stories that the media tells us and the stories that we tell ourselves. They find horror, humanity, and catharsis in the spaces that exist in-between.

There’s a thread of liminal in-between space running through Censor; the uncertainty of whether something is staged or snuff; a projected memory or a projected film. The crackling and white noise of old TVs defines these sequences; the kind that plays when programming has finished for the day, during that stretch between night and morning; as if the light and sound of TV screens were the best way to tell time; an anchor to when and where we might be.

David Cronenberg’s Videodrome and The Power of Television

Like Censor, it uses the politics of mass media to inform a story about psychology, transformation, and breakdowns. All three films understand the seductive nature of mass media, the intimacy of sitting in the dark and being shown images that we can project ourselves onto. These characters — Enid in Censor, Molly in Witch, and Max Wrenn (James Woods) in Videodrome — are offered false promises by mass media; of closure, of hope, of a new kind of future.

Videodrome takes the idea of the seductive screen to new extremes with one of its most iconic images: Nicki’s (Debbie Harry) lips taking up the entirety of a TV screen as she offers herself to Max, her heavy breathing mirrored in the TV set itself. The dialogue between Max and Nicki is the catalyst for the climax of the film. It also shines a light on the relationships the central characters in all three of these films have with media. In Videodrome‘s final sequence, Max is talking to Nicki as he’s sat on a couch and she’s on TV. Before seeing his future, she says “come to me, come to Nicki,” bridging the gap between the image on screen and Max’s life beyond it.

This moment echoes scenes in Witch where Molly feels like the TV is talking to her. At one point, an ad — and actor —for razors seduce her. He seems to address her directly, talking to her through the TV. He says, “Hey, Molly. Wanna come sail around the world with me?” The razor advert recurs throughout the film, and eventually, Molly sleeps with that actor.

As Molly falls deeper into her trauma and psychosis, her dialogue with the TV becomes more twisted and violent. She sees the actor with a razor blade in his hand, saying “why don’t you shave me, you hot bitch?” before he takes the razor and moves along his own throat. Each time the ad plays, it seems to capture something different as new elements of her pathology, history, and trauma come to the surface.

Videodrome inverts the dark seduction of mass media; here, mass consumption in the form of audiences glued to their screens creates malignant growth. The link between entertainment and death exists in everything from Monty Python to Infinite Jest, but it’s this malignancy that seems to offer Max the ability to transform, a kind of heightened, hybrid existence between TV and reality. The hallucinatory transformations, brought on by the consumption of the eponymous Videodrome station, are seen as a heightened state of reality. This illustrates TV’s attempt to influence and take over all aspects of life.

Censor and Witch both contain the horrific, transformative power of Videodrome in their DNA. Their relationships with TV inform reality to the point where it’s impossible to tell what’s hallucinated or real until it’s too late. Where Censor and Witch approach these ideas psychologically, the battleground of mass media in Videodrome is physical, rooted in the conflict between the Old and New Flesh.

What all three of these films have in common is the idea that the representation seen on the screen offers a twisted reflection of the realities that the characters inhabit. For better or worse, all three of these central figures see versions of themselves — and often the parts that they keep most deeply buried — reflected back at them through film and television. It isn’t just the characters, but their realities that exist between the lines of horror and exploitation, from the idea of “cultural decay” and the cruelty of Thatcherite politics in Censor to the endless fetishization of sex and violence in Videodrome. The conclusions of all of these films, which exist in the strange space between reality and fantasy, have Enid, Molly, and Max taking the only course of action available to them: breaking the mirror.