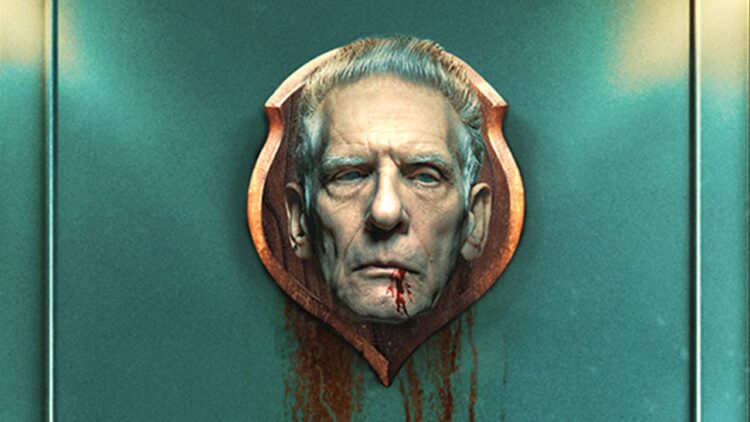 David Cronenberg needs no introduction to fans of the genre. He is one of the most legendary directors in the genre’s history. Or, for that matter, in the history of film as a whole. From cementing his brand of body horror in movies like Shivers, Videodrome, and The Fly, to the Academy Award-nominated A History of Violence and Eastern Promises.

He is one of those very few directors to sort of become a genre unto himself, with so many things today being labeled as “Cronenbergian.” Cronenberg is, at the same time, an accomplished actor as well. In 1990 he starred as the serial killing psychologist Dr. Decker in Nightbreed and has appeared in everything from Jason X to Star Trek: Discovery.

Dread Central was thrilled to catch up with Cronenberg to talk about his new role in Slasher: Flesh and Blood. Slasher has only grown bigger and bigger with each successive season and this new season, which could almost be described as “Knives Out with sharper knives” is absolutely one to watch. Cronenberg talked to us about playing the patriarch of the wealthy, dysfunctional clan at the heart of the show’s new season.

Dread Central: What excited you about this series and made you want to be a part of it? How’d you get involved with Slasher?

David Cronenberg: Well, I was approached by the production, by the producer and director to see, first of all, if I was available and if I would be interested in being involved in a series as opposed to playing a one-day role or something like that. I said, “sure, send me the script.” I was really flattered that they offered me this particular role because it’s a major role and quite different from my usual kind of dispassionate scientist or doctor. This character is very passionate, very tyrannical, very angry and demanding, the patriarch of a dysfunctional family. That’s a role I had never played before. He’s prone to getting very angry and yelling. I don’t think I’ve ever played a role with that much anger in it. So it was a lovely challenge for me. Any actor gets excited to be popped out of typecasting and put into something that’s quite different. Plus I found Ian [Carpenter] and Adam [MacDonald], the producer and director, to be very congenial and outstanding.

DC: And because it is such a different character than you had ever had the chance to play before, did you have any kind of specific inspiration for this, as you said, tyrannical patriarch?

Cronenberg: Well, I don’t know if you’ve ever seen the series Succession, but it’s kind of like Succession except instead of psychological murder there’s actual murder. But I wouldn’t say that was an inspiration, I was just aware of it. It’s something of the same kind of structure, of an intense, wealthy family with a very demanding patriarch.

DC: What are some of the different challenges of acting versus directing?

Cronenberg: In general? Well, I mean, directing is unrelenting. Directing, you don’t even have time to brush your teeth. There are so many things coming at you constantly, questions and decisions and stuff. Acting is not easy, but it is simpler. The basics are, they always say, “say your lines and don’t walk into the furniture.” That’s the rule. In a strange way, it’s true. You have to learn your lines, when you’re a director nobody cares what you look like, if you didn’t shave or have a cold sore, nobody cares as long as long as you can say “action” and “cut.” But if you’re an actor, your body suddenly becomes quite a big deal. How you stand, your posture, what your skin is like, which is why actors are very obsessed with their costume and their makeup and all that, because that’s their instrument. So it’s quite a different thing. Quite a different thing. You could be on the same set in either role and they would be totally different things that you are demanded to do.

DC: I’ve heard a lot of directors say that acting helps them better understand the whole process as well. Have you found that to be true?

Cronenberg: Yeah, I think that’s absolutely true. Whether that makes you a better director or not, that’s hard to say, it would depend on your own personal temperament. I could see a director who’s also an actor having less patience for actors because he or she has experienced it themselves. For me, I didn’t have a lot of empathy for actors before, but from the inside, once you’ve been doing it, you really understand what it’s like to have to spend so much time alone in your trailer, waiting and trying to learn your lines, it’s very revealing. It’s very revealing.

DC: Now you’re starring in a streaming series, and I’ve heard you say before that streaming is the future of cinema. Do you still find that to be true?

Cronenberg: Yeah, I really do. I mean, it makes you realize that movies are more like short stories than they are like novels, to make a literary comparison. I think in the past, you’d say “Here’s Thomas Hardy’s Far From the Maddening Crown” but really it’s a very slim tracing of a big, complex book. Whereas if you’re doing eight hours, ten hours, twelve hours or even several seasons, that’s fantastic. That’s War and Peace, or as close to War and Peace as could be possible. It’s a different kind of moviemaking. It really is.

DC: Since you made the literary comparison, I know your novel Consumed was set up for streaming at one point, has there been anything you can say on that?

Cronenberg: We’re trying to get it made. That’s all I can say at the moment. It’s not my next project, but it’s a project in the future and I hope it happens. I’ve made some inroads into it in terms of writing episodes and things, but we’ll see.

DC: Your upcoming film Crimes of the Future sounds like a return to the kind of films that defined the early portion of your career, as well as being the title of your first feature, what made you decide to return to that sort of overt science fiction now?

Cronenberg:  I think it was really the pressure of my producer Robert Lantos, who had been involved in the developing of the script for some time, and kept telling me that it was still sticking in his head and something that he really thought we should do together. I was saying, “Well, I’m not sure it’s still relevant after some years,” he said, “Why don’t you read it again?” And I did, and he was right, he said it was more relevant than ever. And I thought, “Well, Okay.” Also, I thought it was pretty good. It kind of rekindled in my mind because of that. I didn’t have anything else at the time that was that close to being able to be put into production, so I said, “Let’s do it.”

DC: I loved the approach to the first episode. And I’ve noticed a trend of these wealthy dysfunctional family stories being told right now, between this and Knives Out and Ready or Not. Do you think there’s any reason why we are currently, collectively getting really excited for these wealthy family breakdown stories?

Cronenberg: [Laughs] I think it’s always been an attraction. First of all, everybody is curious about and intrigued by the extreme wealthy families who are somewhat crazed and find it difficult to maintain sanity in the face of their success, so I think there’s a bit of Freud in there. I think it comes and goes in waves. But I think you could go back to Roman literature 2,000 years ago and find, for example, the Satyricon that Fellini made a movie out of also and the feast of extreme wealth, and it’s intriguing for ordinary people who—first of all—probably don’t even want to do that, certainly don’t have the resources to live that kind of life, but it’s intriguing for them to get a peek into that. It kind of feels good when they’re having a horrible time. I don’t know that right now is unique that way, it doesn’t strike me that there’s a unique moment for that.

DC: In general, you’ve worn so many hats over the course of your career. Between acting, directing and writing, what do you find the most rewarding?

Cronenberg: Oh, they’re all rewarding. They’re very different. Each one is very, very different. I can say that right now, to act in Slasher was terrific because I hadn’t really been on a film set for awhile, for various personal reasons, but I missed it and it was a way for me to connect with life on a film set without having to do the commitment of a year of life that you have to make when you’re a director. Being on a film set, there were people there that were the sons and daughters of people that I had worked with before, so I was really connecting with that. And incidentally, particularly, it was great for me to be on a set that had a COVID protocol, because I was wondering if it was even possible to make movies anymore. And I could see that there was a way. This showed me that you could do it and therefore gave me some confidence that if I tried to make a film now, there is a way to do it. So it was good for me for all those reasons. And writing is a very lonely thing. And directing is a very insane thing, so they’re all quite different.