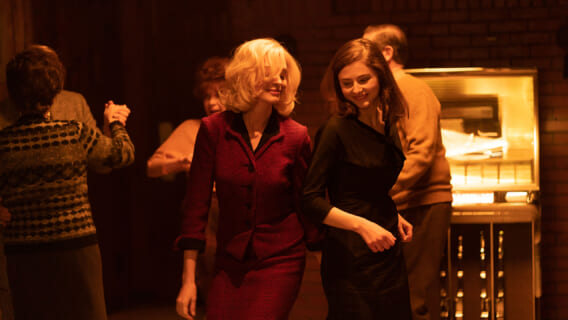 It can be difficult as an audience member, let alone a critic, to easily disentangles one’s expectations for a feature with the actual, screened reality of it. William Oldroyd, of the sensational Lady Macbeth, premiered his follow-up, Eileen, at this year’s Sundance Film Festival. Ostensibly a taut, Hitchcockian yarn about two women in 1960s Massachusetts entangled in a horrible, dark crime, Eileen is considerably more patient and character-driven than its propulsive synopsis suggests. This isn’t an innately bad thing, though it does limit Eileen’s potential as the next big caper breakout. This is a grim, brutal film, one spoken and shot in hushed, muted tones, where the recesses of darkness start in the tenebrous muck and progress until the light is so far gone, audiences start to imagine whether it was ever really there to begin with.

A fantastic Thomasin McKenzie (shaky accent aside) anchors Oldroyd’s adaptation of Ottessa Moshfegh’s novel of the same name. She stars as Eileen, a woman who flutters between her father’s dismal, quasi-abusive homestead and her work at a youth prison, where every coworker is innately hostile toward her. Eileen’s intermittent hours are spent in secret pleasure, with a box of chocolates or graphic sexual fantasies extending the sole lifeline she has to make it from one day to the next. Then, Anne Hathaway’s (similarly sensational) Rebecca Saint John arrives as the prison’s new resident psychologist. She quickly takes an immediate interest in Eileen’s humdrum, unattractive (borderline tragic) circumstances.

I won’t say more about the plot since most of Eileen’s strengths lie in its third-act twist. Though suffice it to say, Eileen is a kind of cross between both Todd Hayne’s Carol and David Slade’s Hard Candy. While the possibility of a burgeoning romance between both Eileen and Rebecca is blunted by the frigid chill of its literary origins, with the two talking not as people, but as characters in an ever-shifting plot, the two remain enigmatically engaging, both actors working remarkably well to conceal their true intentions, whatever those may be.

Oldroyd and director of photography Ari Wegner capture the ennui of a Boston winter, where women’s rights and penal reform lurk just out of view, obfuscated by the ceaseless snowstorms and banks of fog rolling in over the coast. Eileen is as downcast a film as they come, one that is thematically, intentionally or not, an exceptional companion to the fest’s slate of programming. It makes use of Cat Person’s imaginative interludes and ponders passive death by suicide no differently than the aptly titled Sometimes I Think About Dying. Those parallels likely bolster Eileen’s efficacy, though outside the fest, it’s hard to tell just how Eileen might hope to win over audiences.

For some, the shift to genre territory might arrive too little, too late. Additionally, despite a sensational performance from Marin Ireland (also featured in the fest’s birth/rebirth), it’s less feel-good genre thrills, more pit-in-the-stomach uncomfortable, the kind an audience desperately wishes to be over. While the core thrust of the film, that shift remains its biggest twist, an innate obstacle for the marketing team to overcome.

Still, Eileen is a somber, mostly compelling (at times downright chilling) crime drama anchored by Oldroyd’s astute visual eye and a pair of fantastic performances. While it never gets as weird—or romantic—with the material as it first suggests it might, it remains an uncommonly mature Hitchcock homage. This is literary crime in its purest form, for better or worse.

Eileen is a moody chamber drama that sizzles out when it should be heating up.