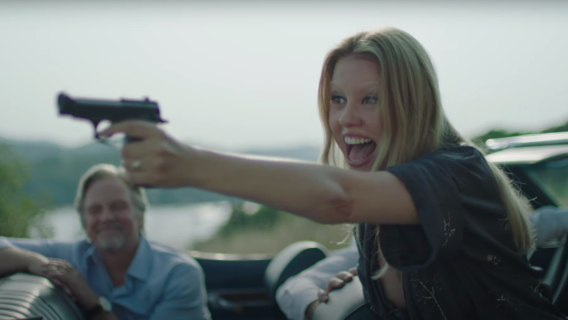 “Fuck the rich” narratives have dominated the media landscape of late. From Triangle of Sadness to The Menu to The White Lotus, contemporary culture is obsessed with the horrors and atrocities committed by the wealthy elite, especially when it comes to punishing them for their actions. But in his new film Infinity Pool, Brandon Cronenberg takes a different approach to critiques of the rich. Instead of the rich getting their comeuppance, the rich can do whatever they want and leave bloody destruction in their wake, as long as they’re willing to pay. And what they want is covered in blood, guts, piss, vomit, and just a splash of liquor.

Failed author James Foster (Alexander Skarsgard) and his wealthy wife Em (Cleopatra Coleman) are on vacation at a gorgeous resort on the fictional island of La Tolqa. In the resort, the wealthy have access to “authentic” Chinese restaurants, endless alcohol, glorious views, and plenty of rest and relaxation. But on the outside lies a more violent country, first hinted at by the tall fences topped with barbed wire and the restriction of any guests leaving the compound. At first, James and Em are content with that arrangement, aimlessly spending their days pretending to love each other while she makes countless jabs at his lack of money and inability to write his next book.

Then one day, they meet the charming and glamorous Gabi (Mia Goth), who claims to be a fan of James’s work. She and her husband Alban (Jalil Lespert) eventually invite them to a secret picnic outside of the compound. After a drunk romp in the sun, and an extremely realistic hand job featuring an ejaculating cock, the couples head home on the dark country roads. When the headlights fail, James hits a man crossing the road and they live him bleeding out in the dirt.

When the authorities of La Tolqa, a place reminiscent of a country in the Eastern Bloc complete with a corrupt, seemingly fascist government, come to arrest James for murder, he and Em learn that any crime is meant with the death penalty. They also learn about the La Tolqin doubling tradition. Essentially, if you have the money, the authorities will create a body double to stand in your place at an execution. Thanks to a rich wife, James pays the fee and watches himself get killed for his crimes. It’s a not-so-secret secret of the island, and is treated like a game to the rich. When there are no consequences, there are no rules. Nothing is off the table. And Cronenberg makes sure you know it.

This launches a violent, downward spiral for James, one where he’s in over his head but still craves more. He feels like a god. No longer is the spineless failure that floats through life like a jellyfish. He sees what he thinks power means and joins the ranks of Gabi, her husband, and their elite group of friends who have all experienced this strange cloning (but not really) process. Of course, that power is only achieved through selfish violence, but that doesn’t matter; what matters is his own ego. As Gabi and company push him, upping the violence with each passing hour, James suddenly realizes any power he had may have been a facade.

Skarsgard is surprising here as a much more soft-spoken character than in previous roles. While there are moments where he taps into the more monstrous side of himself we’ve seen in The Northman and Big Little Lies, his James Foster is restrained and quite frankly, a bit spineless. He’s unsure of his place in the world as he rides on the wealth of his wife, a parasite for all intents and purposes.

Seeing the physically intimidating Skarsgard play such a meek parasite is strange but exciting to see the actor take on such a different role. He’s easily swayed, pulled this way and that by those with more power, confidence, and money than him. Skarsgard truly sells himself as this rather pathetic character who gives into ultra-violence at the first sign of positive attention. This is a role that proves the range of Skarsgard’s talent extends past playing scary, masculine characters.

Goth, on the other hand, is gleefully unhinged as the manipulative and seductive Gabi. She bats her eyelashes and purses her lips expertly, playing the perfect actress who knows just what men want to hear. She’s constantly in control, even when it seems like she isn’t. Even as she screams in delight and guzzles wine like it’s her job, Gabi knows she’s always the one with the power. Goth lets herself go and, expectedly, steals the show with a magnetic and terrifying performance.

Cronenberg’s world-building skills are once again on display in Infinity Pool as he fills the film with details that tell us enough about La Tolqa to make it feel like a real place. He creates a new written language, which is seen on police uniform patches, license plates, buildings, official government vehicles, and more. Strange masks worn at the resort hint at a deep cultural tradition with a very dark side. And while their ability to double people is never fully explained, or frankly understood by outsiders, it still adds an air of mysticism to the setting. It also makes the group’s manipulation of such a tradition all the more repulsive as they continue to exploit locals for their own pleasures.

These performances, plus Cronenberg’s world-building and commitment to gorgeous violence, make Infinity Pool stand out from the already-saturated market of horror satire about the wealthy. Cronenberg refuses to pull any punches, letting the blood flow and refusing to let the audience look away from the violence. His characters are truly deplorable until the very end and he revels in that. As seen in Possessor, Cronenberg loves taking it to the extreme, and Infinity Pool does just that.

Infinity Pool is the disgusting vacation of hell that’ll keep you from trying to make friends with strangers. While it is Cronenberg’s most accessible film in terms of narrative, that doesn’t make it any less visceral, stomach-churning, and harrowing. Plus, Cronenberg sprinkles in enough pitch-black humor to add just a dash of absurd levity to an already deeply absurd situation. At once a critique of the behavior of the ultra-rich and also a look at the delicate male ego, Cronenberg creates another disgusting masterpiece of genre cinema that has no problem reveling and rolling in bodily fluids.

At once a critique of the behavior of the ultra-rich and also a look at the delicate male ego, Brandon Cronenberg creates another disgusting masterpiece of genre cinema that has no problem reveling and rolling in bodily fluids.