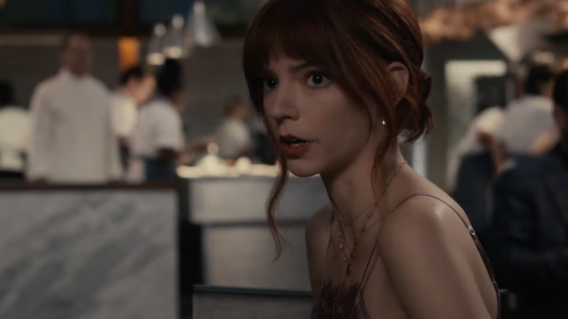 If you could choose, what would be your last meal? It’s a question often posed as a conversation starter among strangers, the answers revealing simple truths about each respective diner. It’s also the meat and potatoes of the Mark Mylod’s The Menu, a fun and feisty horror comedy that takes a bite out of food culture and capitalism.

Much like fellow 2022 Toronto International Film Festival selection Glass Onion: A Knives Out Mystery, The Menu follows a group of rich folks who travel to a remote island for a willing exercise in excess. The Menu, however, not only serves up a skillful skewering of consumerism as a concept. It’s also a literal activity as guests are subjected to a multi-course meal that hits a little too close to home.

Ralph Fiennes stars as Julian Slowick, a celebrity chef who began his career as a humble hamburger hawker and has since risen to the top of the culinary crop. After cutting his teeth at various restaurants over the years, Chef Slowick’s highly curated and hard-to-get-to restaurant Hawthorne now offers farm-to-table selections at an outrageous $1,250 a head.

Hawthorne Island’s guests for this particular evening service come from various industries, including film (John Leguizamo in a self-deprecating turn as a washed-up actor), food (Ozark’s Janet McTeer as unbearably uptight critic Lillian Bloom), and tech (Rob Yang, Arturo Castro, and Mark St. Cyr). Seated among these puffed-up professionals is an older couple (Judith Light and Reed Birney) who claim to be Hawthorne regulars. There’s also The Witch and Last Night in Soho’s Anya Taylor-Joy as Margot, a late addition to the party who is the only one who can barely stomach Slowick’s table-side theatrics.

The Menu should tickle the average horror lover’s palette. Each new course/chapter is more bitter and brutal than the next. It will also satisfy anyone who considers themselves a “foodie” in that most of the dark humor peppered through Seth Reiss and Will Tracy’s screenplay comes from playful ribbing of those who hunger for haute cuisine. Nicholas Hoult’s character Tyler, for example, is a hilarious stand-in for every person who has ever privileged the presentation of a plate over the actual food on it.

That’s not to say that The Menu doesn’t look as good as it tastes. Its dark and dank production design provides an ideal canvas for the blood and body parts lost. In a similar style to many overrated Michelin-starred restaurants and shows like Chef’s Table, director Mylod (Game of Thrones, Succession) approaches the material with purposeful pretention. And yet, The Menu’s core messages come across very simply and clearly, going down the hatch as easily as a cold Coke and a side of fresh-cut fries.

One of my only complaints about The Menu is that Taylor-Joy is typecast as another reluctant heroine who has to fend for herself once the tables start to turn. More successful is Hong Chau (Watchmen) as Chef Slowick’s dutiful staff member Elsa. Her deadpan delivery is a perfect side dish to the fanciful performance put on by Fiennes.

Suffice it to say, if you are hungry for a good time this fall, order one ticket to The Menu. Just make sure you’ve got change for a greasy cheeseburger on the way home.

Mark Mylod’s The Menu serves up a juicy satire that should satisfy horror fans and fed-up foodies alike.