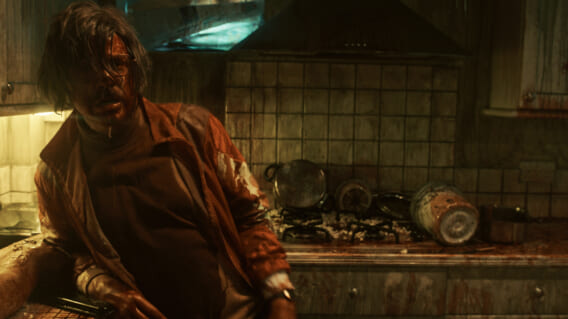 Feed Me opens with a woman found dead as her husband makes a desperate phone call. But it’s a call that she’s never going to answer. We’re thrown into chaos and try to figure out what happened as we begin following Jed (Christopher Mulvin). Jed is the husband that made the phone call and we now watch him as he grieves. We find out his wife suffered from bulimia, which was a strain on their marriage. At this point, everything looks fairly bleak. The movie seems like it’s about to be a weird thriller about eating disorders or yet another mediation on grief. Even the lighting and cinematography seem to support this. However, after his wife’s funeral, Jed meets Lionel (Neal Ward). This meeting serves as an abrupt tonal shift that also sets us on a harrowing journey, to say the least.

Because Ward seems to be doing an amazing Ted Lasso impersonation in a bad wig, we can’t help but laugh. I’m unsure if directors Adam Leader and Richard Oakes pitched it to Leader as, “Ted Lasso but make it cannibal.” Or perhaps it was the actor’s choice. All I know is, that it was so funny and off-putting for a good chunk of the movie. At least until it became stale, and started to feel like a hindrance to the film and the actor. However, waiting until almost the end to see what Leader is capable of was worth the wait. One of the saving graces of Feed Me is that it gives this actor a vehicle to go completely off the rails. And we love to see it.

While waiting for the Lasso Effect to wear off, Lionel convinces Jed to let him assist Jed with ending Jed’s life. Jed finds out Lionel is a cannibal that would love to eat him piece by piece. Shockingly, Jed moves into Lionel’s disgusting home. He also cooks up a scheme that never truly makes sense. We get some fun blood work as our deranged Ted Lasso (aka Lionel) hacks off Jed’s limbs. We also see Jed’s visions of his wife to remind us he’s still grieving. It’s dark to say the least and causes us to lean forward a few times as we try to figure out if we’re having fun or just needing to see where Feed Me is going.

Feed Me has random scenes of levity mixed in because it’s supposed to be a dark comedy. We get Lionel flirting with a lady but talking about his roommate (Jed) until his intended target thinks he’s dating the guy. We also see police officers being worthless as Lionel feeds them parts of Jed that he’s passing off as meat. They don’t seem to care that his house looks like it’s from Silent Hill. The movie feels like a grab bag of ideas and a few sketches that go on for way too long.

I’m not sure what Feed Me set out to do. I’m also not sure if my need to see where it would go qualifies as having a good time. It feels like there are some good ideas here that are just buried by trying to do a few too many things.

Let me know if you have gotten a chance to watch Feed Me at @misssharai.

There’s a lot of ideas here that never fully meld together. However, we get the joy of watching a cartoonish villain use a saw and slowly eat a man. Sometimes that’s all we can ask for.