Check out our review of Dario Argento's 'Dark Glasses' out of this year's Fantasia International Film Festival. 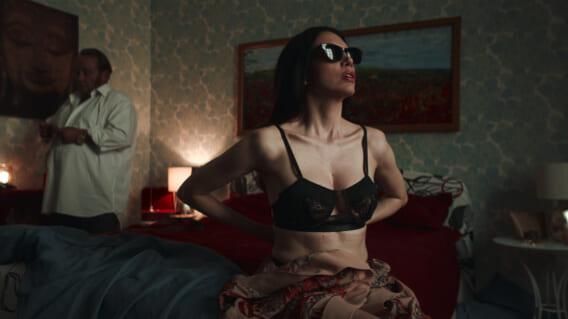 For the first 20 minutes, Dark Glasses (Occhiali Neri) has all the hallmarks of classic Dario Argento. His first feature film in a decade, the early goings are a return to form. This is evidenced not just by what’s on screen, but also a poster featuring a blood-splattered eye. Sex worker Diana (Ilenia Pastorelli) is targeted by an unseen killer who rams her car into oncoming traffic. The resulting accident leaves Diana permanently blind and the family of young Chinese immigrant Chin (Xinyu Zhang) either dead or comatose.

It’s gnarly and it’s wickedly melodramatic. Argento pays homage to Blood and Black Lace with an early kill rendered with both classic stalk-and-slash sensibilities and contemporary buckets of blood. The first half of Dark Glasses is additionally considerably more sympathetic than fans of Argento might suspect. Diana adapts to sightless life in a montage of blind minutiae that, while saccharine, is effective at centering her plight. With a propulsive score from Arnaud Rebotini, Dark Glasses at first appears to be a return to form. Somewhere along the line, however, it becomes clear that the blade of Dark Glasses only cuts to the surface.

Less maniacal, and dare I say convoluted, than most of Argento’s cinematic legacy, Dark Glasses is a giallo revival that often forgets how to giallo. Tender moments between Diana and Chin, with whom she takes from a group home on account of guilt over the accident, are irreconcilable with daft police work and a seeing eye dog who appears to have just completed a canine tour of duty. With a wildly vacillating tone, Dark Glasses is difficult to follow. Narratively, there are no surprises, including one of the most blase killer reveals in Argento’s history. Thematically, though, the whiplash as Dark Glasses shifts from homage (there are shades of Ovidio G. Assonitis’ Madhouse), to reverence for Argento’s own body of work. A dash of parody becomes too much to handle.

It’s Phenomenon meets See No Evil, the obscure 1971 Mia Farrow thriller about a blind woman in peril. While the score and performances convey violent urgency, the actual plotting is akin to Farrow wandering for hours on end. In the grand lineage of blind horror, the likes of Wait Until Dark and Julia’s Eyes better accomplished the central conceit. Dark Glasses never renders Diana’s blindness as anything more than an added obstacle. Not that blindness needs to be exploited. Here, though, it’s merely an opportunity for Diana to be yanked about by those around her. Guillem Morales managed the condition far more successfully with Belén Rueda.

Pastorelli does at least give the role her all. As incredulous as the inciting circumstances are, there is a charm in her dynamic with the young Zhang. Sure, it’s an odd pairing—sex worker and ostensibly kidnapped child track down a giallo knife man. But in fits and spurts, it’s just odd enough to work. Yet, Argento being Argento, it’s odd that the violence itself is similarly only present in fits and spurts. Aside from an early mangled throat, Argento’s signature, Grand Guignol style is utilitarian, nothing more.

Collectively, however, Dark Glasses is still Argento’s best work since Opera. Trauma and The Stendhal Syndrome might have their charms (I am conspicuously ignoring Mother of Tears), but Dark Glasses feels complete. While tension and logic ebb and flow, it’s a professional production from one of the genre’s best. Like Carpenter’s The Ward, it’s a far cry from the esteemed classics, but taken in the right context, it’s a fitting reminder of what makes Argento so great.