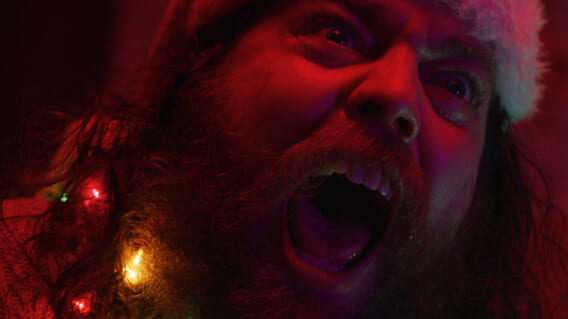 There’s a fascinating trend this year where more horror films are stretching the boundaries of politeness. Films such as See No Evil interrogate what people are willing to put up with in the name of avoiding conflict and how easily that can be taken advantage of. Now, director Eric Pennycoff follows in those footsteps with his religious horror The Leech. Here, Pennycoff layers in the Catholic Church and some gnarly Christian imagery to examine the hypocrisy of religion and the power of temptation.

Graham Skipper plays Father David, a priest who leads a minuscule congregation in an anonymous small town. He preaches every Sunday and in between services, he takes to spreading the word of God on Facebook. He is alone. Then, he meets Terry (Jeremy Gardner), a down-on-his-luck dude who just needs to catch a break. Being a man of God, Father David invites Terry to stay in his home, extending a hand to the poor because he could be an angel. Something like that.

But an angel Terry is not. Gardner plays the sloppy house guest so perfectly that I wanted to punch him almost every second he’s on-screen. He smokes cigarettes, blasts metal, and immediately takes up as much space as possible. It gets even worse when he tries to sneak in his pregnant girlfriend Lexi (​​Taylor Zaudtke). The bizarre couple eggs each other on, in turn ensnaring David into their manipulative grasp.

Those wishes do come true in the final act. There’s no denying that Pennycoff swings for the damn fences in the final 15 minutes. The film dissolves into surrealism, flashes of Christmas lights and tinsel sparkling menacingly across the screen. But, it comes in almost too late. This psychedelic dive into religious horror was so fascinating that I wanted more, a longer final act that delves further into Hell.

Regardless of my desire for a bit more, The Leech is ultimately a successful and incredibly effective twisted comedy of errors that makes you writhe in your seat. This is in no small part due to the incredible performances that carry much of the film. Skipper, Gardner, and Zaudtke have such strong chemistry that they’re still able to create this vulgar yet fascinating bond despite each of their rather deplorable characteristics. Skipper is especially stellar as a simmering man whose rage is mere seconds from erupting forth. You almost pray for him to snap and free us from his strained optimism

The Leech is a bonafide holiday horror classic. It’s a nightmare that doesn’t use Christmas as a gimmick, but rather as a foreboding religious backdrop. This isn’t the holiday horror where Santas go mad or snowmen come to life. No, this is a Christmas more interested in extreme religious beliefs and how the word of God is used for evil. It’s an exciting new take on religious horror that’ll stay with you and have you questioning everyone’s intentions. Thanks to Chattanooga Film Festival, we were able to celebrate Christmas in June with this exciting horror gem.

The Leech comes to Arrow Video this December.