‘A Wounded Fawn’ Is A Weird Little Trip [Tribeca 2022 Review] 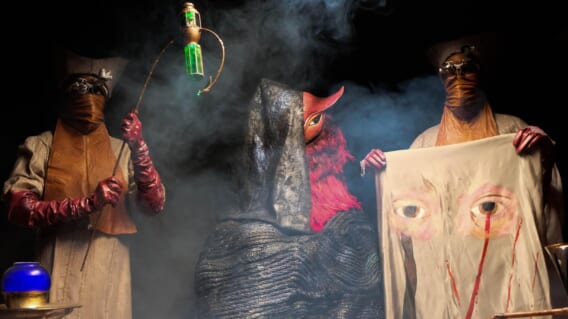 A Wounded Fawn is Travis Stevens’ third feature film. It’s also his third crack at exploring gender dynamics within a medium, and genre, that doesn’t have the best track record with women. This attempt is more straightforward, and more epic than his previous films, though. There is no sugarcoating or misdirection here. We know from the first five minutes our lead is dangerous. We then watch him practically go through chapter one of the abuser’s handbook for the first half of the film. In addition to the film’s thesis, we also get a refresher on the Wrath of the Erinys and watch Greek Goddess realness get served on an indie budget.

Meredith (Sarah Lind) is still getting over her last abusive relationship. She’s putting herself back out there during a weekend getaway with Bruce (Josh Ruben). Meredith is learning to trust herself, and people, again. So she needs Bruce to be a charming and safe guy. That’s why Meredith keeps trying to tell herself these red flags are her own paranoia. Even when Bruce’s previously murdered victims warn her, she’s able to tell herself it’s all in her head and continues trying to save the weekend. Sadly, a lot of us are familiar with Meredith’s dance.

Also Read: ‘Next Exit’ Is A Melancholy, Yet Bumpy, Road Trip Worth Taking [Tribeca 2022 Review]

Lind’s performance channels so many of us that it’s almost too relatable. Watching her try to pick up the pieces, to only find a new breed of bad guy almost hurts. You find yourself wanting her to run even though you know this shoe is about to drop any second and it’s too late. You know you’re here for a horror movie, and you know the scariest thing is often a “nice guy.” She hits each character turn like a champ. From a former victim relearning how to trust herself, to a woman that’s trying to keep her shit together, to finally a survivor that’s over her would-be murderer’s bullshit. Lind knows this character from the inside out and effortlessly adds so many nuanced layers to Meredith. We see the vulnerability and strength in every frame and it’s heartbreaking.

We spend the first half of the movie waiting for Bruce to do something awful to Meredith and thinking this is her story. However, the middle of the movie shifts to tormenting Bruce. It’s a very inspired casting choice to have indie horror-comedy favorite Ruben play a serial killer who targets women. Not only does it drive home the conversation about “nice guys,” but it also gifts Ruben a chance to remind us that he was a theatre kid long before he took to making us laugh on the internet. Not only does he get multiple moments to go full creep, but he also gets unsettling quiet moments which are even more disturbing. The character tics he brings while finding places to push, or pause, Bruce’s unraveling as Greek Furies exact their revenge seemingly come as easy as breathing to Ruben. It’s a truly unhinged performance that weaponizes Ruben’s unavoidably natural sincerity and charm.

Also Read: ‘Crimes of the Future’ is A Darkly Funny Look at Sex, Surgery, and The Artistic Process [Review]

Lind and Ruben are tasked with the hard job of keeping jaded audiences invested. We think we know where this is going because we’re given so much up top. However, we’re wrong and could never predict what this movie turns into. A Wounded Fawn fits in with the likes of Fresh, Promising Young Woman, and, ironically, Ruben’s feature debut Scare Me. Yet its aesthetic, and the way it handles the subject matter, couldn’t be more different from the previous films. However, it’s in conversation with them when it comes to this “nice guy” problem that society refuses to address.

I live in a country where “nice guys” do bad things regularly. Then other “nice guys” use their platforms to paint them as victims and argue they deserve second chances. We watch “nice guys” claim cancel culture is out to get them as they pick up awards and avoid consequences. I’m very here for men who are aware that men are a huge problem and acknowledge it. Stevens and co-writer Nathan Faudree do just that. They also give a handful of actors a very wild playground filled with disturbing pictures. This film is fucked up imagery, stellar performances, and Greek imagery gone wild. If you’re inner art kid wants another source to cite when it comes to gender dynamics in horror, then you might want to check it out.

Have you seen A Wounded Fawn? Then let me know what you think at @misssharai.

Come for the weird Greek vibes and stay for some very grounded performances. This movie came to get weird, tell you men aren’t that great, and send you back into the world an even stranger person.