‘Crimes of the Future’ is A Darkly Funny Look at Sex, Surgery, and The Artistic Process [Review]

We're all ears for new Cronenberg. 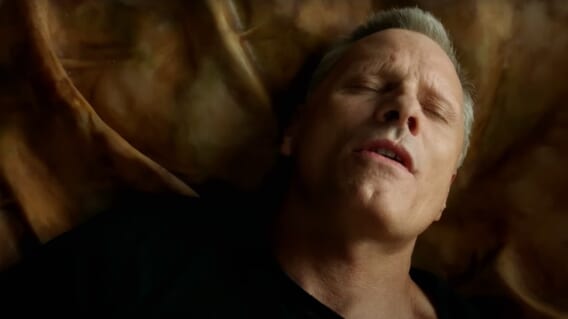 David Cronenberg was many of our first forays into the wild and wonderful world of body horror. Whether it was The Fly or Videodrome or Crash, Cronenberg gave us access to the ways of the flesh, his own twisted yet sensual interpretations of what it means to have a physical body, as well as what it means to transcend it. The work is heady, but goopy; yet Cronenberg hasn’t dabbled in corn syrup for some time. But, now, he’s back with the body in his latest film Crimes of the Future.

But, don’t let the marketing fool you. This isn’t a movie full of blood, guts, and torn skin. Instead, with Crimes of the Future, the Daddy of Body Horror looks us in the eye and says, “I’ll give you body horror. But I’ll also give you my meditations on what it means to create art nowadays. And you will like it.” And, like any good disciple, we nod our heads and say, “Yes, Daddy,” and welcome every second with open arms.

Saul Tenser (Viggo Mortensen) is a performance artist in a world where humans can no longer feel pain and infectious diseases are a thing of the past. So, surgery and body modification are the new rock shows. Performers slice into their flesh and undergo surgery for a crowd to titillate and shock. Saul, however, has a very special talent. His body spontaneously grows new organs, which is also suspected to be a marker of a new phase of human evolution. In defiance of his own body, he has these organs removed for an audience by his partner Caprice (Lea Seydoux). His innards are a canvas with which she can play and experiment.

Enter the National Organ Registry, who are trying to track the growth of new organs and see if in fact there is a new phase of humanity on the horizon. Timlin (a creepily great Kristen Stewart), a pencil pusher at the registry, is enamored with Saul’s work, which is definitely outside of her professional scope. But as these worlds collide, Saul becomes entangled in conspiracy and fringe groups who are trying to spread the word about human evolution. There are a lot of threads to follow here as Cronenberg effectively creates a detective story with a twinge of satire about the art world and a dash of surgery for flavor. While it is mostly successful, the film stumbles over its own ambition in creating such a vast narrative and world.

While Crimes of the Future revolves around a society obsessed with surgery, there is little blood or gore to behold. Sure, there are the set pieces like the man covered in ears, who really serves as a parody of how artists take it too far to try and stand out. But, much of the body horror is heard, not seen. It is Saul’s heaving breaths and raspy coughs as he tries to settle into his own form. It is the strange chair meant to help with digestion, but just cracks Saul’s joints and esophagus out of place. The body horror lurks under the skin, the unseen transformations and adaptations our bodies undergo as we hurtle towards an uncertain future. Body horror is no longer buckets of blood and mangled flesh. It is the horrors that unfold inside of us, unseen and silent.

Cronenberg replaces a bit of that horror with comedy as Saul makes dry jokes about his body or as Timlin perfectly annunciates her consonants. But much of the comedy comes from the film’s own takedowns of the state of making art today. Take the ear man, again, for example. He’s the butt of a joke about trying too hard to make a statement. Saul, an aging performer and artist himself, is watching everything from the sidelines, observing what the world has become. He is our Cronenberg stand-in, a man taking in the world he’s occupied for so long and quietly laughing about it all to himself.

It’s a shift in form for the director, certainly, but what he doesn’t hold back is sensuality. There is a strange sexual energy that runs throughout Crimes of the Future that electrifies the dry, brown earth surrounding our characters. Everything looks dull and the buildings are practically falling apart, but that doesn’t matter. The aesthetics here are sharp yet vibrating with possibility. Pleasure is no longer soft; it is hard, cutting, and metal. But it is all-encompassing. It is scientific and yet still alluring. Surgery parties are held like play parties, where attendees can watch scenes and wander through different rooms. Surgery is the new sex and it may just be a little bit fun.

These aesthetics contextualize the expansive world Cronenberg has built with Crimes of the Future. There’s no exposition dump or explanations offered as to why things are the way they are. We’re merely thrown into a world where surgery beds are common, no one feels pain, everything is rusting away, and yet we still have a vibrant art world.

With all of these minute details conveying a future where technology seems to have regressed, it feels like Cronenberg left a bit too much on the table. The story needs a bit more time to breathe and to let us really sink into this world. There’s so much happening and it is a world I so desperately want to inhabit, for better or worse. With a bit more time, that world would feel even more realized. It would also perhaps help anchor a few of the headier concepts being juggled through the film.

Crimes of the Future is a surprisingly funny, neo-noir body horror about creating decades worth of art and what it means to exist in one space for so long. It is Cronenberg giving us what we want with his own spin. The film feels personal, a letter from Cronenberg about his career, his works, and his influence on cinema. He never shies away from poking fun at the audience, and knows how to make us squirm. Don’t go in expecting 1980s Cronenberg. Instead, go into Crimes of the Future ready to see how a master has developed his craft.

‘Crimes of the Future’ is surprisingly funny, expansive, and as Cronenbergian as ever. This one isn’t for gorehounds, but still delivers its fair share of bodily horrors.