Have you ever seen a golf club gang before? 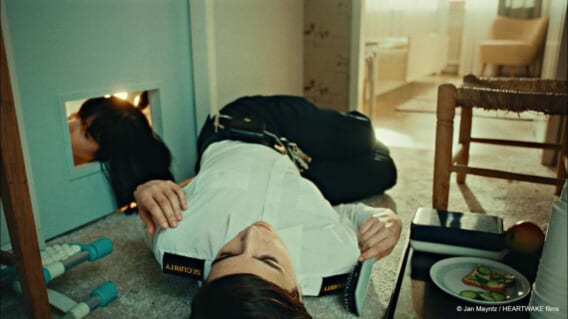 If you want a fun and light German film that preys on your recent lockdown experience then We Might As Well Be Dead is it. It’s equal parts charming, off-putting, and intriguing. It’s not delivering scares beyond the uneasiness of being watched and othered in your community though. So, it’s more of a Monday the 9th than a Friday the 13th for most of us.

We Might As Well Be Dead follows Anna (Ioana Iacob) who has been part of this weird community for six years. She even works there now as she supports herself and her daughter Iris (Pola Geiger). Iris is currently locked in their bathroom fearing that she has the evil eye because a neighbor’s dog she hates has disappeared. Meanwhile, Anna is starting to feel the pressure of her position as the community levels up their creepy factor over this missing dog. As their neighbors’ paranoia builds, the tension in their apartment begins to spill over and out. This leaves Anna to wonder if they’ll be the next tenets voted out.

This supposedly ideal community is where the anxiety resides in this cute little gem. The film plays with the audience as it immediately makes us mistrust the community. It even drops tense music in key moments that make you think we’re about to see something disturbing. When community members start moving around in a group carrying golf clubs you assume something bad is about to go down. However, it ultimately just reminds us that gates keep people in as much as they keep people out. Just because the building looks pretty doesn’t mean it’s not a prison. Or that the supposedly respected members residing within are above mob mentality.

There is a palpable sense of dread throughout We Might As Well Be Dead that I kept waiting to give way to something major. While it’s hard to watch this community turn on their own and start voting people out, and the panic of those on their way to talk to the board, it felt like this movie was building towards something bigger. It’s a surprising swerve that I’m still not sure how I feel about. I like the movie but I also can’t help but notice that we’re doing a lot of the heavy lifting as audience members. We’re the ones that can’t trust our neighbors, and have just recently lived through a lockdown, so the idea of being locked in with people that will turn on you in a heartbeat is very close to home. However, that’s where the terror stops.

Overall, We Might As Well Be Dead feels like an episode of a sci-fi show that has a happy ending. I’m here for the idea of utopias revealing themselves to be dystopias. I’m also here for the performances and especially applaud what Iacob does with this character. We empathize, worry, and laugh with her. As she becomes more annoyed and silently angry, we wait for her to make the decision to leave. We almost urge her to as if she can feel us aggressively staring at her. I also couldn’t help but wonder what was outside of the gates that would hold her and everyone else here though. That unanswered question, and the implied threats from the golf club gang kept me leaning forward well after I realized this movie wasn’t going to go there.

It’s always interesting to ask who can you can trust when you can’t trust your community. It’s also nice to have a few movies that subvert our expectations by being warm comedies in tense situations. However, this is not the bloody movie about community that most of us are probably expecting when we find it. That doesn’t mean it’s bad. It’s just more of an easy appetizer before getting into something more sinister.

Let me know if you’ve seen this movie at @Misssharai.

It’s a fine film that provides a couple of laughs and plays on that mistrust of our neighbors that most of us have. It flirts with a few different genres before deciding to keep it light.