‘The Summoned’ Review: An Unhinged Battle for Souls Unfolds In New Hellish Horror

Every character is turned up to 11 and we aren't mad about it. 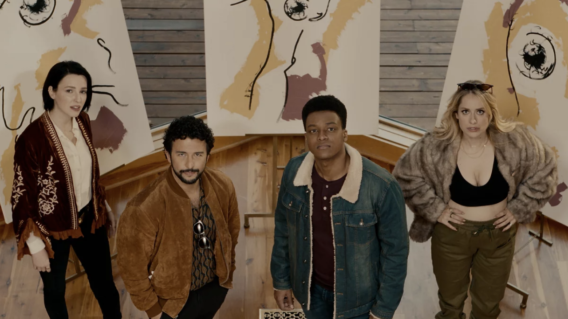 It feels like every day more self-help gurus and so-called life coaching pop up on Instagram like a pesky roach infestation you just can’t seem to control. Posed pictures of (mostly white) people in front of a sunset with a generic caption about changing your life meant to persuade you to follow in their footsteps. But what happens when that retreat is merely a trap and leads you into a hellish spiral of violence? Such is the case in Mark Meir’s feature film debut The Summoned, out now on digital and VOD.

Elijah (J. Quinton Joseph) is a mechanic dating famous singer Lyn (Emma Fitzpatrick), who’s invited to an exclusive self-help retreat. She brings Elijah as her plus one, where they meet Tara (Angela Gulner) and Joe (Salvador Chacon), their companions for the weekend. The palatial cabin is slathered in hardwood with antler accents, oozing that “country but make it fashion” aesthetic. As they settle into their rooms, the mysterious and bizarre Dr. Frost (Frederick Stuart) explains the journey that awaits the foursome. They’re about to confront their sins.

As they confront their sins and anger bubbles to the surface, Elijah begins having visions of violence. Something else is afoot at this retreat and he realizes that he is the center of a demented game that isn’t meant to have a happy ending. Chaos ensues, blood is shed, and souls are sold in the name of success. You know, the typical self-help retreat itinerary.

As soon as the plot reveals itself, it also starts to buckle under the weight of its own ambition. Meir weaves a fascinating story and keeps you captivated the entire runtime, but the minutes tick on, the plot becomes more threadbare. More questions are generated than answers, and it makes you wish that the script had been just a bit tighter.

That aside, The Summoned holds your attention with an incredible ensemble cast of quirky personalities that snipe, bicker, and quip back and forth with frenetic intensity. Every conversation feels like a fast-paced tennis match as words and insults are hurled back and forth. Gulner especially chews the scenery as an outspoken actress who demands she gets her way. But the stand-out performance is Joseph as Elijah, a sweet man trying to navigate the cutthroat world of fame and what that costs.

At the core of The Summoned is a fascinating tale about influencer culture and self-help retreats that prey on insecurity. Some will no doubt want to compare this to Get Out, but The Summoned stands on its own. While the story starts to fall apart in the third act, all of the performances, especially Joseph, hold it all together as each character becomes more and more unhinged. The rocky road leads to an interesting destination that’ll keep you guessing until the very end. So beware of those self-help treats on Instagram, my friends. You never know their true intentions.

While the story starts to fall apart in the third act, all of the performances, especially Joseph, hold ‘The Summoned’ together as each character becomes more and more unhinged.