This is the future of queer horror. 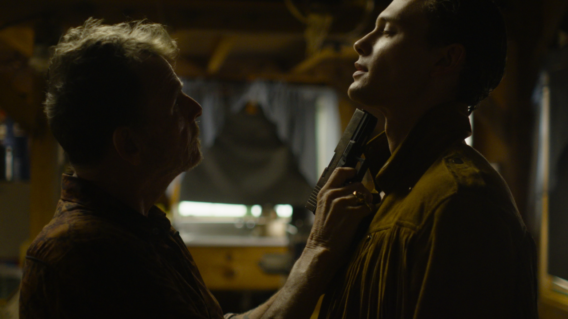 Queer representation in media is, overall, sanitized. Queerness is made palatable for wide audiences, either used as comedy or to convey some perceived-beautiful tragedy that shows just how difficult being queer is. There’s no space for messy queer narratives, both literally and figuratively. Thankfully, director Carter Smith (The Ruins) saw that as a challenge and made his newest film Swallowed, a dirty, transgressive, and sexy queer horror film that shuns the straight gaze for an unabashedly gay one.

The film opens with Benjamin (Cooper Koch) dancing in a dive bar while his friend (not boyfriend) Dom (Jose Colon) films him. Immediately there’s a spark struck between the two. Benjamin moves with ease and comfort around Dom as small beads of sweat drip down his neck. Dom smiles and cheers his friend on, all while looking like he wants to be more than friends. Benjamin is about to move to LA to pursue a career in gay porn, leaving Dom behind in this small Maine town. While Benjamin swears his new job has his trip out covered, Dom still wants to make sure he’s financially secure.

So, on the way home from the bar, Dom stops to do a drug pick-up from Alice (Jena Malone) so he can earn some extra cash for Benjamin. But, when she makes both Dom and Benjamin swallow the cargo to smuggle it across the Canadian border, they quickly realize they’re in over their heads. They embark on a hellish trip that reveals the horrors of the unspecific contraband traveling through their digestive tracts. To say much else would spoil the rolling hits of gut-churning revelations of Swallowed. But, suffice to say, it gets gnarly.

As the film enters its third act, Mark Patton (A Nightmare on Elm Street 2) bursts onto the scene with an unhinged performance as a queer drug dealer with a flair for the violent and dramatic. This is one of Patton’s first acting roles since the 1985 slasher and he is hamming it up. He carries himself like an aged drag queen who believes she’s an extravagant diva. She just also happens to have a gun, a trailer in the woods, and a successful drug operation. His performance veers into camp territory, giving Swallowed a surprising breath of dark comedy that feels jarring at first. But, as Patton struts around the screen and starts screaming obscenities, it feels right at home in this bizarre world.

But what anchors the film is the chemistry between Benjamin and Dom. It imbues Swallowed with this charged intimacy that electrifies every scene, no matter how horrific. As Dom gazes at Benjamin, he bites his lip and looks at Benjamin like he’s the most beautiful thing he’s ever seen. Their friendship drips with desire and Koch and Colon sell that desire beautifully. Each touch is full of meaning, each look is full of feelings they wish they could share. These two men are so in love and that anchors the emotional stakes of Swallowed.

The film’s 4:3 aspect ratio furthers that intimacy as the camera focuses closely on everyone’s facial expressions, especially as Benjamin and Dom talk to one another. Even in the film’s most horrific moments, the camera doesn’t revel in the act or the gore. Rather, we’re made to focus on the faces twisted in pain and agony. Our imaginations run wild as we’re forced to confront the visceral reactions to such horrors.

With Swallowed, Smith proves the importance of dirty, transgressive queer horror that refuses to cater to a straight gaze. Queerness doesn’t need to be palatable to be respected. Sure, it’s great to see happy, funny gays in romcoms. But seeing hot gay guys get covered in dirt and muck and experience body horrors is what I want. I am a chaotic gross queer and want to see myself in these films. Swallowed is a film for those of us who see our queerness as beautifully monstrous, gross, cool, sexy, and a little scary. Smith looked at us scary gays and said, “I got you.” This is truly a piece of queer horror art that hopefully paves the way for more films like it that refuse to cater to straight audiences and showcase the darker sides of being gay.

‘Swallowed’ is truly a piece of queer horror art that hopefully paves the way for more films like it that refuse to cater to straight audiences and showcase the darker sides of being gay.