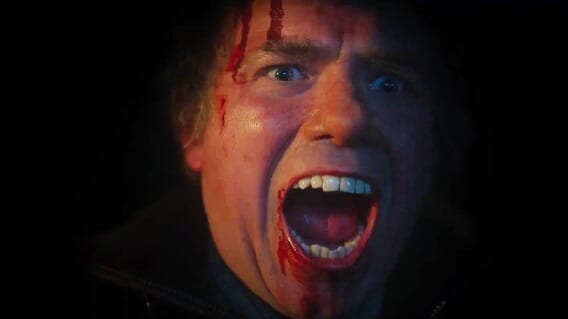 A few weeks ago I had a man corner me in a coffee shop and relentlessly ask me for my email address to the point that I had to leave. Not even seven days later, another man grabbed my hair as I stood waiting to cross the street so he could read my shirt because, according to him, “my breasts were in the way.” What I’m trying to say here is that men do not give me, or most women, a moment’s peace. It’s a truly exhausting experience to go through the world prepared for a man to say something rude, or touch you without consent. So when I went to see Men, directed by Alex Garland, I was skeptical. How could he capture what it means to walk through the world as someone who presents as female? And yet, somehow, he did it.

Men follows Harper (Jessie Buckley) who is grieving the recent death of her husband James (Paapa Essiedu). She heads to a secluded country home in the British countryside, situated in green rolling hills and surrounded by the forest. It’s quiet and just what she needs to try and start the healing process.

But, men won’t let her do that. At every turn, just when she thinks she’s getting comfortable, a man says something disarming or makes a scenario so deeply awkward that her guard is always up. From the moment she meets Geoffrey (Rory Kinnear), the homeowner, she is painfully she is in the world of men. He’s nice enough, but makes strange comments about her marital status that are meant to be innocent. Yet, they have a strange edge to them. It’s like he’s painfully aware of their gender difference and wants to make it as apparent as possible.

Harper brushes off the awkwardness, determined to enjoy her stay. So she goes on a walk through nature. As she trudges through muddy paths, greenery surrounds her, giving her world a vibrance that perhaps she hasn’t experienced in quite some time. As the rain begins to fall, she tilts her head back and smiles. It’s a genuine smile, one of pure joy that portrays a long-awaited sense of ease. The score swells, and for just a moment, there is peace.

Then it’s quickly shattered. As Harper comes upon an old railway tunnel, she discovers she can create a symphony with her echoing voice. With child-like wonder, she creates a strange song that reverberates through space. But, this small game morphs into a strange summoning spell as a male figure appears at the other end of the tunnel. Harper quickly runs away, but now she is being followed by a very strange and naked man (again played by Kinnear). From this moment on, her every movement is plagued by a man, whether they’re trying to help or mean her harm.

Kinnear gives a career-best performance as every man in the film, appearing as Geoffrey, a repulsive vicar, a cop, and even a child (the de-aging done here is Not Good). It’s a move that depicts men as all cut from the same cloth. Sure, they look different and hold different professions, but no matter what, they all see women as something to covet in one way or another.

Not to mention Buckley absolutely stuns as a woman going through incredible pain who refuses to give up. Harper is not victimized and made to seem weak. Instead, she represents the experience of just surviving in the face of daily misogyny. You can’t wilt in the face of it, but scream, scratch, hit, and stab yourself free.

Men then hits a massive tonal shift that takes it from a demented home invasion tale to a nightmarish pagan body horror that’s going to either deeply impress or offend audiences. The strange logic established through the film’s beginning gives way to absolutely no rules, just madness. Such a breakdown of narrative clarity is frustrating; it feels like Garland is being willfully obtuse to make you really think about the subject matter. And that does work for the most part. But this desire for audience engagement will alienate some viewers. While Garland is known for his heady concepts and bizarre films, Men is by far the most ambitious project of his, making Annihilation‘s psychedelic ending look straightforward in comparison.

But that’s why I love it. It’s a film that’s lingered in my mind for days and has blossomed into something even more beautiful the more I’ve percolated on its final act. Between Garland’s writing and directing and incredible performances from Buckley and Kinnear, Men is a deeply upsetting look at the aggressions women face on a daily basis. Those fears are intertwined with the process of grief and the desire to disentangle yourself from toxic love. Men will not be for everyone. But it’s going to generate a fascinating conversation among filmgoers.

Alex Garland’s third film will be polarizing, but this reviewer loved its narrative complexity, nightmarish imagery, and stunning performances by Jessie Buckley and Rory Kinnear.