‘Jethica’ is a Harrowing Depiction of Life After Abuse [SXSW 2022] 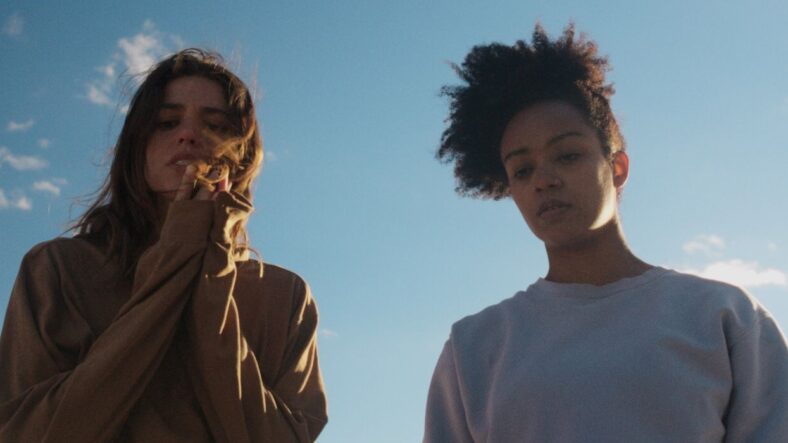 Peters Ohs’ Jethica is a gut-punch of a film. Between very real depictions of the fear of a stalker and the use of a tortured ghost, the film strikes a balance between crime thriller and horror film, creating a hellish vision of what happens if your stalker won’t go away in life or death.

Jessica (Ashley Denise Robinson) runs into former high school classmate Elena (Callie Hernandez) at a gas station in New Mexico. They make the usual small talk but Jessica is anxious to continue her trip. Still, Elena offers her coffee and a place to rest if she wants it. While Jessica initially refuses, she quickly drives to the ranch, searching for a friend as she’s trying to outrun her past.

Also Read: ‘The Unbearable Weight of Massive Talent’ is a Glorious Homage [SXSW 2022]

Jessica has been plagued by a stalker Kevin (Will Madden) for months. He continuously calls her, texts her, demands her attention despite only speaking a few times in college. Videos reveal an unhinged person babbling on about their love and future, weaving in thinly veiled threats of violence and revenge. She can’t escape him and one day, out of pure frustration, she kills him when he appears at her front door. Now, she has a dead body in her trunk and a lot of emotions to unpack as she grapples with the after effects of abuse and the need to do something with his corpse. Thankfully Elena offers to let her bury the body on her land. Now that’s a friend.

But, they quickly discover that anyone buried there comes back as a ghost. So, Kevin manifests as a spirit now pacing the property, screaming Jessica’s name as if he never died. Even in death, he haunts her every step, never giving her a moment’s peace. Jethica then slightly moves its focus to Kevin working to figure out how to deal with the ghost, as well as his realization that he’s in fact dead.

Also Read: ‘Everything Everywhere All at Once’ is Messy, Kinky and Inspired [SXSW 2022]

At first, a shift in focus to the ghost of a stalker is troubling. Why do we need to see what happens to him in the afterlife when all he deserves in this tortured existence? But, Ohs quickly depicts this afterlife as deeply lonely and a never-ending desert. This isn’t a place of redemption or even empathy. Instead, Kevin is doomed to spend eternity wandering the dusty landscape with a fellow ghost who he can complain to. He is the same person from beginning to end; there is no shift in his behavior. Instead, Ohs uses his ghost to not only physically depict how trauma haunts us, but also how even in death there is no need to empathize with him. Yes, you can pity him. But forgive? No way.

Meanwhile, at the core of Jethica is the kind of supportive friendship you can only dream of. They may not be best friends but Elena is able to calmly hear Jessica’s story than just bury the body. Through deadpan delivery and a seeming emotional disconnect from what’s happening, Elena quickly believes Jessica’s plight. It’s women supporting women and you absolutely love to see it.

Also Read: ‘Deadstream’ Is A Nasty and Hilarious Second-Screen Horror Featuring An Annoying Influencer and One Nasty Ghost [SXSW 2022]

My biggest qualm with Jethica, though, is the label of horror comedy. Yes, there are comedic elements especially when it comes to Kevin’s ghost. But overall this is a story about coping with abuse and the punishment of abusers. All I could think of while watching the film was my own experience with a stalker, which speaks to how emotional affecting Jethica is.

Ultimately Jethica is an important ghost story about how abuse haunts survivors and how abusers never really go away. Jessica can’t escape her trauma and through her stalker’s resurrection as a ghostly figure, Ohs shows audiences the reality of surviving abuse. Jethica is a powerful meditation on what it means to not only survive but to find support on even the darkest days. It’s a tale of tentative friendship and support when you need it most.

While not necessarily a comedy, ‘Jethica’ is an upsetting look at the lingering effects of trauma through the paranormal.