Hell is a teenage girl. 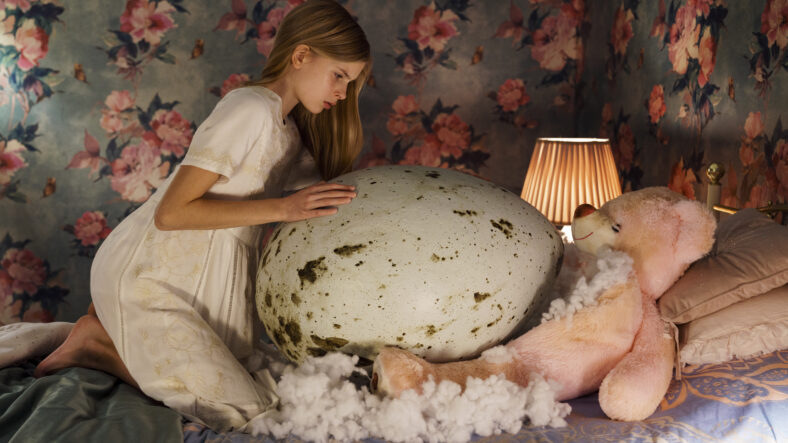 Being a young girl is a living nightmare. As a person who both lived that experience and has watched plenty of horror movies, I know this to be true. Getting your period, becoming an object of sexual attraction, starting to experience sexual attraction. It’s a messy time for any teenager. But for Tinja in Hanna Bergholm’s debut feature Hatching, it’s only exacerbated by a controlling influencer mom, a looming gymnastics competition, and a monstrous human-bird hybrid that hatches in her bed.

Tinja (Siiri Solalinna) is a young girl on the cusp of teenagerdom. Yet she still dresses like a little girl in starched white dresses and ribbons in her hair. You see, her mother (Sophia Heikkila) is a mommy influencer, filming every second of her family’s lives for her vlog. But of course, everything is captured in multiple takes and staged perfectly before she presses record. Even their house is an influencer’s wet dream, with obnoxious pink floral wallpaper, strategically placed trinkets, and perfectly color-coordinated furniture. It doesn’t feel like a place where actual people live. Instead, it feels like a house-sized IKEA showroom; it’s all for show.

Tinja’s existence is dependent on her mother’s approval. She does gymnastics at her mother’s demand. She pushes herself past her limits to prove her perfection. And Tinja is exhausted. Then, she finds a strange egg in the middle of the woods. She incubates it in her bed, hiding it under her giant pink teddy bear, a secret all of her own. With this egg, Tinja has something that is truly hers.

But whatever control she briefly had with the egg is obliterated once the creature within hatches. It’s a horrifying giant crow creature with human teeth, giant eyes, and sparse feathers. Tinja must now care for the creature, which she names Alli. But Alli is a monster and as she grows, she begins to wreak havoc on those who’ve wronged Tinja.

As Alli grows up, she begins to morph into Tinja herself. She becomes an evil doppelgänger, a feral version of a restrained young girl who isn’t even allowed to have friends. It is the typical personification of everything a young girl can’t be. And yet she is evil, rage personified, and trying to seek revenge for Tinja even if Tinja doesn’t ask for it. Yet, Hatching’s central metaphor gets muddled. Is Alli supposed to embody the animalistic side of Tinja? Is Tinja trying to fight back against her mother’s method of parenting? Bergholm wants to do it all.

Despite a rocky script, Solalinna and Heikkila anchor the film with incredible performances. They play off each other to create a deeply tense and toxic relationship that’ll terrify anyone with mommy issues. Heikkila’s face is plastered with a fake smile, an unconvincing facade that quickly shatters when she’s even remotely challenged. Solalinna, on the other hand, looks like an abused puppy. Her gaze is turned downward and a smile hardly ever crosses her face. They are the epitome of a codependent mother-daughter relationship that can downright destroy a childhood.

Related: ‘Piggy’ Is A Groundbreaking Effort, Even When It Gets Caught In The Mud [Sundance 2022]

That relationship alone is worthy of a horror movie. But, the monster is layered on top, a hideously cute creature that invokes both disgust and love from Tinja. The puppet was designed by animatronic designer Gustav Hoegen, who previously worked on such properties as Star Wars. Almost every effect in Hatching is practical, adding a layer of believability to the outlandish tale. Yes, it’s obviously a fictional monster, but seeing Solalinna actually place her hand on the monster and interact with it makes it feel a little more real.

While mostly successful, the script’s mixed messaging dulls Hatching’s ending. What could have been razor-sharp lands more like a soft blow. Bergholm is working within a well-worn conceit and tries to burst out of the box. Her monster, production design, and strong central performances help Hatching stand out amongst the crowd. However, it does tread familiar story beats that feel predictable.

Hatching is a self-assured debut feature film bursting with incredible monster design and an impeccable set. Bergholm quickly establishes her unique tone and vibe and never waivers from that. They give Hatching a distinct voice despite weak portions of the script. Any person who grew up with an overbearing mother will find the film terrifying in more ways than one. With Hatching, Bergholm births her own beautiful monster, something both horrific and intriguing to behold.

The monster, production design, and strong central performances help Hatching stand out amongst the crowd. However, it does tread familiar story beats that feel predictable.