FilmQuest Review: ‘Alien on Stage’ is an Inspiring Behind-the-Scenes Look at Horror in Amateur Theater

Directors Lucy Harvey and Danielle Kummer delightfully pull back the curtains on a theatrical production of Ridley Scott's 'Alien.' 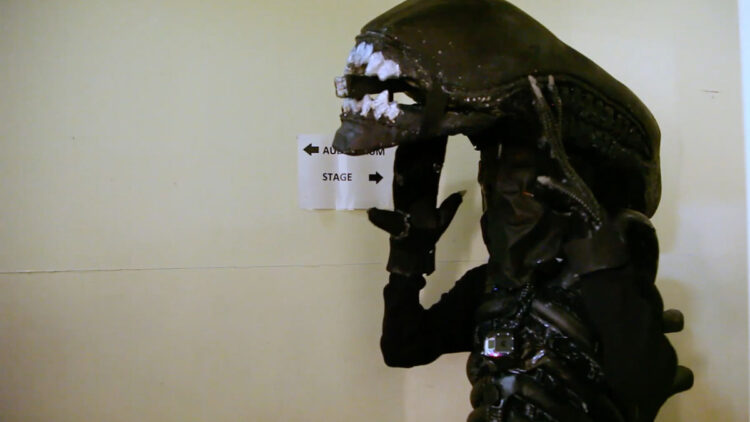 Alien On Stage is a documentary that follows a group of bus drivers from Dorset who decide to do something a bit more meaty for their next amateur production. They set out to do Ridley Scott’s Alien live, and it obviously does not go well, but the production makes its way to the west end where audiences enjoy laughing with, and sometimes at, them. The production is more fun than it has a right to be, and picked up quite a following even before the documentary was made. “Well, that’s what comes from being amateurs. You get away with it,” says David, the director of the stage production of Alien on Stage, who is also one of the subjects of this documentary.

While it feels like a mockumentary at times, it is quite possibly the most honest and charming community theater cast and crew that I have ever seen. Watching Pete, who has been tasked with special effects and props for the production, build the alien and chest-burster from scratch warmed my theater kid heart.  It was a joy to watch him use commonly found items, in really creative ways, to try to emulate the effects of the original film. Part of the fun is watching the practicals that will never match up as we all agree to suspend disbelief but still have a few uncontrolled giggles. Most people will also want to praise the actors, none of whom have any acting experience, for just going for it and committing to the experience.

The film is delightfully refreshing and, at times inspiring. Watching this band of misfits come together to tackle something as huge and beloved as Alien, and falling into the fun and camp of it all makes it easy to see why they were invited back. The feel-good energy is contagious, and it also sends a message that art is in the eye of the beholder. Sometimes the best option is not the person with decades of experience and countless degrees, but instead, the right person can be anybody that puts in the effort and is willing to commit to the process.

This is such a feel-good documentary that will probably lead to this group of bus drivers by day, theater troupe by night picking up more fans every stop of its festival circuit. Not only is this fun for sci-fi fans, theater kids, and people who want to laugh, and see something uplifting after all of the awful that has been the last few years. I think it will also speak to people who have these skills and abilities but have not taken that step of believing in themselves enough to share it in a public setting.

The troupe, Paranoid Dramatics, was invited back to London’s West End where they performed Alien on Stage for charity the following two years. I hope that they come back soon as I would love to have a new excuse to visit London and have a beer, and a laugh, with this group.

Alien on Stage had its Utah premiere at FilmQuest 2021.

Equal parts heart and hilarity, Alien on Stage is a delightfully inspiring documentary.