FilmQuest Review: ‘When The Screaming Starts’ Is a Wicked Funny Serial Killer Mockumentary

The funniest stretches of this serial killer mockumentary are good enough to warrant their own TV series spinoff. 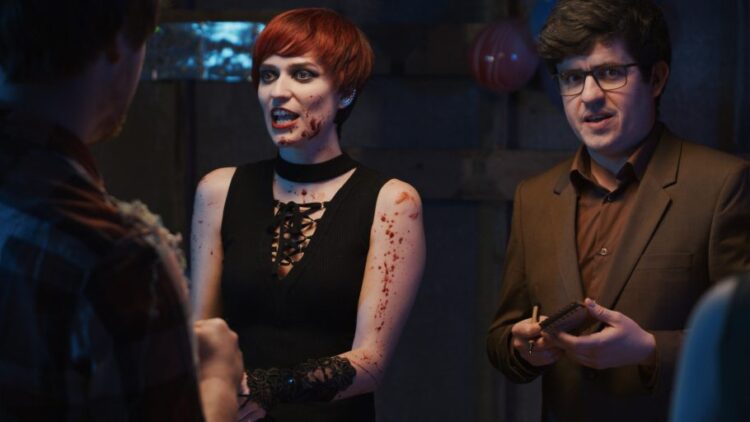 Norman Graysmith (Jared Rogers) heads to the home of an aspiring serial killer, Aidan Mendle (Ed Hartland), to make a documentary. Once there, he finds himself immersed in Aidan’s world of misfit psychos and getting a lot more than the story he set out to capture on film.

The first half of When the Screaming Starts is non-stop, wicked funny and had me obnoxiously cackling during my viewing. The latter half finds the laughs coming fewer and further apart as it begins to wrap up loose ends and give us a surprising turn of events that is better left unspoiled. The second half is still fun, but can never quite compete with what came before it because it has to give us closure for it to end.

When the Screaming Starts would make an awesome series and land pretty damn close to What We Do In The Shadows, and I would watch it for at least two seasons. I think a longer narrative would help sustain the constant laughter, while also giving it room to tell the story and without having to sacrifice one for the other. We also need more smart genre shows in general, so it would be a win-win.

I love that the film pokes fun of this societal need to document everything, and this morbid habit of celebrating serial killers. Norman gets invited to an aspiring serial killer’s home, and not one crew member calls the police. Aidan and his girlfriend, the creepily hysterical Amy (Octavia Gilmore), even hold tryouts to build their murder family, and people show up hoping to join. It is both bonkers and completely believable, if you think about it long enough.

The characters that join this family are each more distinct and silly than the last. I could write a whole separate article just going down the cast list describing the loudest laugh of each performance and still never fully give the ensemble the justice they deserve. However, Norman and Aidan’s (Rogers and Hartland) relationship stands out. It puts a new spin on the tried and true relationship we have seen for decades, between a subject and the person studying them, like Michael Myers and Dr. Loomis or Hannibal Lecter and Clarice Starling. The two of them are introduced before anyone dies, and serve the film’s comedic take on the standard co-dependent relationship trope. Hartland’s performance has flashes of Parks and Recreation’s Andy Dwyer (during the early years when Chris Pratt was cool). He’s never completely sure what is going on, but is the most enthusiastic person in the room anyway. Rogers is tasked with being the supposed voice of reason who never quite fits in, and is also a little too invested in the project.

During the Q&A following the film, Rogers said most of the cast have known and worked together for years. When the Screaming Starts is only their debut feature, and it’s a very strong first outing. I’m excited to see what they do next.

When the Screaming Starts had its regional premiere at FilmQuest 2021.

When the Screaming Starts is a laugh-out-loud funny dark comedy, and the film breathes a lot of life back into the mockumentary subgenre.