FrightFest Review: In ‘The Retaliators,’ A Pastor Seeks Brutal Revenge

This incredibly violent revenge thriller asks how far we will go to avenge our loved ones. 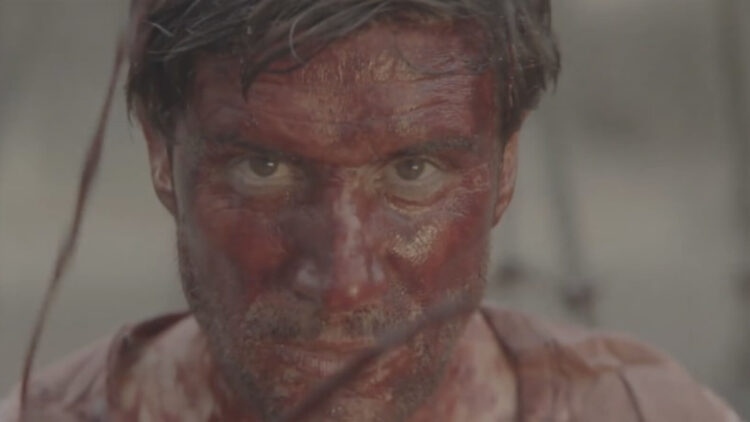 Most of us like to think that we would do anything to protect our loved ones. But The Retaliators examines what happens when one man fails to protect his innocent daughter and the lengths he goes to in order to avenge her death. Directors Samuel Gonzalez Jr. and Bridget Smith clearly wanted to highlight how all it takes is one tragic event to push an ordinary person over the edge. The Retaliators is not a film audiences will be forgetting in a hurry.

Michael Lombardi stars as Bishop, a respected pastor who is viewed as a pillar of his local community. Bishop is also the father of two daughters. While he loves them dearly, he also insists on turning the other cheek whenever someone wrongs him or his family. This is demonstrated when he refuses to retaliate against a creep who snatches a Christmas tree from his daughter. However, things take a turn for the worst when Bishop’s daughter witnesses a crime and is subsequently murdered so that she cannot testify.

Bishop initially becomes a recluse upon hearing the news of his daughter’s death as the criminals who were responsible go unpunished. Instead, we learn that Jed (Marc Menchaca) the detective investigating the death of Bishop’s daughter, has a secret. He’s constructed an underground bunker where he imprisons and tortures murderers, rapists, and other depraved criminals who he believes were not sufficiently punished by the law. Jed’s torture methods are enough to make even hardcore horror fans feel queasy, with one of his prisoners being left unable to speak because, as Jed explains, “Drano wreaks havoc on the vocal cords.”

After inviting Bishop to his chamber of horrors in order to exact vengeance on his killer, Jed quickly becomes frustrated when the paster refuses to even raise a hand to the murderer, because, as Jed puts it, “Only complicit men take secrets to the grave”. While Jed then plans to imprison Bishop in order to prevent him from telling others about the bunker, it’s then attacked by the aforementioned gang and the imprisoned criminals are released from their cages. From this point on, The Retaliators becomes one of the most hyper-violent films of the year, with Jed and Bishop outright slaughtering hoards of criminals as they fight for their lives.

While it was certainly unconvincing to see Bishop, who presumably has not had any prior combat experience, suddenly becoming an action star who was able to successfully defeat waves of vicious psychopaths, the filmmakers deserve props for coming up with some creative kills. At one point, a motorbike engine is used to great effect. Sure, it was not convincing to see a pastor with no mention of military or martial arts background wielding a machete, like a Jedi Master wielding a lightsaber. But who cares about realism when we literally see Bishop hacking off a guy’s feet with a single blow? Lombardi’s dedicated performance also helped to sell the brutality of these scenes, as he convincingly plays a man who fights like he has nothing left to lose.

The Retaliators dares to ask the question of how far people can go before they lose all traces of humanity. With a climactic scene full of gore and brutality, this is a viscerally entertaining film that makes us wonder how far we will truly go to protect what’s ours.

The Retaliators forces us to ponder what we would do in order to protect or avenge our loved ones, and it was also arguably one of the most brutal films to have been screened at this year’s FrightFest, making it a daring and unforgettable viewing experience.