A political thriller with horror undertones, 'The Devil’s Deal' is a sensationally unpredictable dive into the dark side of Korean elections. 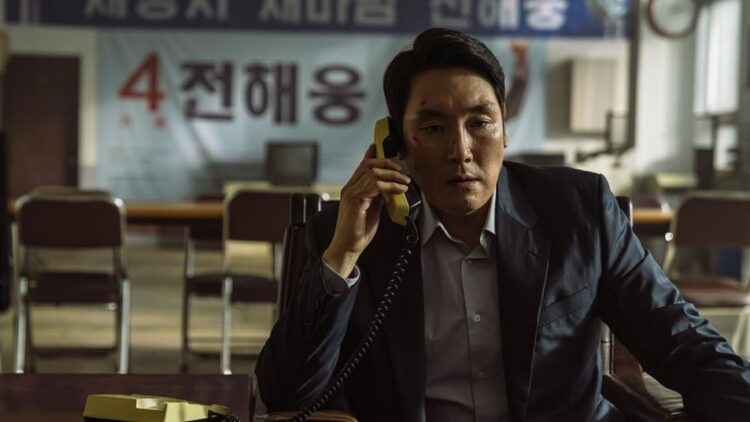 
Director Lee Won-tae’s The Devil’s Deal is a dense, almost mythological South Korean crime drama. With spurts of horror violence and a propulsive, near-gleeful regard for bad men in bad company, it’s a twisty thriller that, while familiar, transcends cliché on account of the brazenness of its incendiary plot. It’s arguably too talky and labyrinthine for mainstream success. But for fans of old-school parlor tricks and classic noir in the modern day, The Devil’s Deal is sure to satisfy.

Very much a plot-driven movie, The Devil’s Deal follows Cho Jin-woon’s Hae-woong as he runs for office in the Haeundae District‎ of Busan, South Korea. Assured he will have the Democratic Party’s endorsement for the nomination, within the first 15 minutes, his charming—if overly optimistic—career hopes are dashed after the party instead endorse a rival candidate. (The party is more confident that this rival will be more willing to colloquially play ball if elected.)

A considerable debt also looms over Hae-woong’s head—debt he had hoped to assuage once elected. In response (or retaliation), Hae-woong steals confidential documents regarding a development project in the Haeundae District‎ and leverages access for seedy campaign funding. He intends to run as an independent.

Within the first hour, the election itself unfolds. While I won’t spoil the results, it’s clear The Devil’s Deal is more concerned in drawing explicit parallels between politicians and criminal enterprises than in the “who will win” drama of campaign politicking. In this way, the film has connective thematic tissue to another South Korean genre hybrid (yes, Parasite). But that linkage extends far beyond any country of origin.

Like its genre mashup forbears, The Devil’s Deal is often very funny. Cho Jin-woon excels at making Hae-woong both oafish and menacing… and very tense. With no less than four concurrent storylines, all with their own players and motivations, it’s serpentine in its plotting and maintains an alluring sense of unpredictability, as winners become losers and back again. All of this is augmented by brief vignettes of shocking violence, including what’s sure to be one of this year’s grisliest on-screen executions.

Not all of the film is perfect. As much as Yeo-Eun Son does with her role as a virtuous journalist assisting Hae-woong, it’s hard to move beyond just how cliched her character is. (Her lines dish up plenty of familiar monologues about the ethics of journalism and the quest for the truth.) Though focused on a criminal underworld and the political bedfellows therein, some of the familiar gangster speak—“We went to a foxhole to catch a fox and found a tiger”—could easily have been cut. For someone whom The Devil’s Deal treats as a major player in its saga, her role could have been considerably expanded.

That said, The Devil’s Deal is still exceedingly good. Despite some forays into uber-macho cliché, the performances are phenomenal across the board. Lee Won-tae collaborator Mu-Yeol Kim delivers a standout performance as a gangster whose motivations and alliances are never clear, and the threat of violence around every corner renders it more suspenseful than more straight-up horror fare. The plot is dizzying and unpredictable, equal parts captivating and horrifying. And while its rhetorical appeal is nothing new—being in politics is like making a deal with the devil—it’s easy to forgive when there’s this much craftsmanship and sheer bravado on display.

For fans of classic noir and political thrillers with horror undertones, The Devil’s Deal is, frankly, a deal worth making.

A political thriller with horror undertones, The Devil’s Deal is a sensationally unpredictable foray into the dark side of Korean elections.