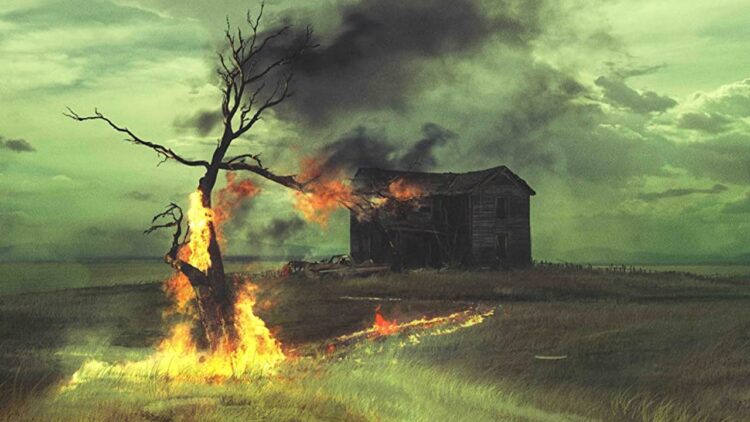 Last year’s Fantasia International Film Festival gave us Bryan Bertino’s chilling The Dark and the Wicked and What Josiah Saw, which is part of this year’s Fantasia lineup, is already being compared to that film. Both films deal with fractured families tormented by unseen forces, but the unspeakable evil in What Josiah Saw is something entirely different from the demonic entity in The Dark and the Wicked. Skillfully written by Robert Alan Dilts, known for the short film Eliki (2009) and directed by Vincent Grashaw (Bellflower, Coldwater), What Josiah Saw succeeds not just from the remarkable performances by the cast, but also the terror-inducing score and sepia-toned cinematography that permeates the film and envelope the viewer in an unshakable feeling of dread.

Robert Patrick gives an impeccable performance as Josiah Graham, the patriarch of the scarred Graham family. The story is told in three distinct chapters, each one a brief character study of the three Graham siblings. First, we meet Tommy (Scott Haze), who presents as having some type of intellectual disability and lives a sheltered life at home with his father, Josiah, who likes to remind Tommy that the townspeople think he’s feeble-minded and not worthy of love. Haze is fantastically believable as the wide-eyed, childlike, but ultimately broken Tommy.

When an oil company comes to the small, dying, rural town where the Grahams reside and set their sights on the family’s farm, we learn that the family’s matriarch, Miriam, hung herself from a tree in the front yard for young Tommy to find. What Josiah Saw is an expert slow burn, and the way small, horrible pieces of the family’s past are revealed makes the story all the more agonizing to take in. The storytelling style combined with the grimy cinematography where even when the sun is out, every scene has a tangible darkness to it, make this a film that is guaranteed to haunt you for days. The people in town claim the Graham farm is haunted, possibly by Miriam Graham, who some believe walks the grounds at night.

Next, we meet Eli Graham, played flawlessly by Nick Stahl. Eli is an ex-convict who has led a hard life of drugs and excess and served time in prison for having sex with an underage girl. Eli also has a gambling problem and when he goes to the slimy bar owner he owes money to, played by Jake Weber, he is forced to go on a mission to rob a group of local gypsies in order to pay back his debt. When the robbery goes horribly awry, Eli has no choice but to go on the run and decides to pay his sister Mary a visit. Each of the Graham children received a letter from the oil company offering to buy their farm and Eli is convinced he can start a new life with the money, despite the fact he is shrouded in darkness as a result of his childhood, something from which he can never escape. The gloomy cinematography doesn’t just surround the characters, it also manages to masterfully agonize the viewer, so don’t be surprised if you have the uncontrollable urge to wash off the dreadful feeling this film leaves with you.

Even though it’s evident each of the Graham children are marked in some way by terrible things from their childhood, Mary Graham seems to be the most traumatized of the siblings and Kelli Garner gives an incredibly powerful performance as Mary. Now married and trying to adopt a child in a vain attempt to make her life better, Mary is clearly unstable. She obsessively works out in a darkened room while blaring loud music and likes to take photographs of unusual subjects. When Eli shows up at Mary’s house unexpectedly, she’s visibly shaken, but still agrees to go back to the family farm with him to try and convince Tommy to sell the farm to the oil company.

When Eli and Mary arrive at the farm, they are surprised to learn that Tommy was expecting them. You see, their father Josiah claims that the ghost of their mother came to him and told him that if the family does right by God, they can somehow save her from burning in hell. Thanks to the score and cinematography, the tension is so ramped up in the final act of What Josiah Saw, that it’s almost unbearable to watch, but also impossible to look away, as the true terror of the family’s past is finally revealed.

Superbly directed, What Josiah Saw is exquisite psychological horror, and every member of the cast is in top form as the gruesome story unfolds. The sound design, terrifying score, and overwhelmingly grim cinematography all make this film an experience that will relentlessly gnaw at the viewer for a long time after watching. Seek this one out as soon as possible but leave the lights on.