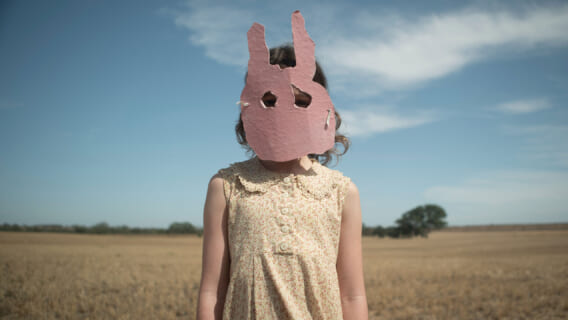 Run Rabbit Run is an Australian horror title making its world premiere at Sundance 2023. A psychological slow-burning thriller with potential to spare, this serious and heartfelt effort is ultimately too undercooked and unoriginal to be of any real use. While on purpose or not, director Daina Reed and writer Hannah Kent’s shadow play is painfully too similar to Australia’s other modern horror meditation on motherhood, The Babadook.

The story here concerns Sarah, a fertility doctor (played by Sarah Snook of Succession fame) whose daughter Mia starts to behave rather strangely upon her seventh birthday. A mysterious white rabbit appears, Mia’s temper slowly spirals out of the control, and Sarah’s estranged mother is brought back into the picture to predictably mysterious results. As the story drags on, a ghost from Sarah’s past emerges, and the mask of reality quickly slips.

From mysterious books showing up defaced with sinister markings to the archetype of the monstrous mother emerging near its climax, Run Rabbit Run is drawing far too much inspiration from a number of glaringly familiar genre classics. As previously mentioned, the similarities to Jennifer Kent’s The Babadook are far too obvious, but there are also parallels to Ari Aster’s Hereditary, which requires mention. A poorly applied subplot surrounding an estranged mother’s dementia and an unreliable narrator is only further informed by a score of screeching strings which will no doubt astral project any horror fan to the first time they saw the trailer for Hereditary. And, unlike Sundance 2023 standout In My Mother’s Skin which uses homage to deepen and strengthen its story, Run Rabbit Run clings to it like a crutch.

Besides issues of homage, there is also the trouble of cliches and overused tropes. If I can spend my career as a horror critic without seeing another school teacher presenting parents with a foreboding crayon drawing, I’ll be happy. While we’ve seen this trope abused properly in a number of classics like The Ring, Insidious, The Exorcist, Sinister, Mama, Orphan, and The Shining … if a filmmaker is going to utilize it, they better have earned it. Writer Hannah Kent has not, and the moment a school teacher sits down across a tiny table from Sarah Snook, it’s obvious that a spooky crayon rendering is coming our way.

While Run Rabbit Run has its fair share working against it, that doesn’t mean this moody and often beautiful release is without merit. The talents of Snook and Reed are towering. And while other performers and filmmakers would have delivered this material into a grueling and tiresome runtime, these talents are able to keep the audience’s attention for most of the experience. Also, the cinematography by Bonnie Elliot is masterful, and she frames bleak rural Australian landscapes with confidence and flair.

So while there is plenty of talent to be seen both on screen and behind the camera, Run Rabbit Run still finds itself caught and slaughtered by a barrage of unoriginality and uncentered storytelling. It’s impossible not to draw similarities between The Babadook and Hereditary, and its use of familiar tropes ends up skinning all potential off of this moody hare.

‘Run Rabbit Run’ has plenty of atmosphere, but jarring and undercooked similarities to ‘The Babadook,’ —another unsettling meditation on motherhood —end up skinning it of all potential.