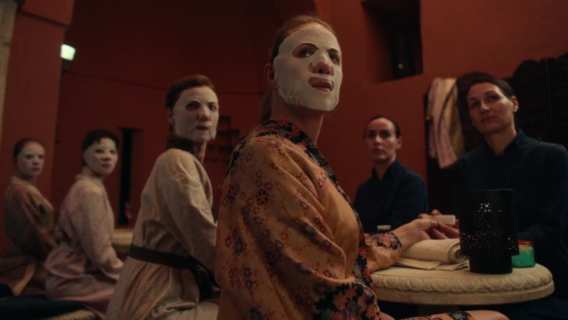 Jessica M. Thompson’s The Invitation might not have made a huge splash at the domestic box office, grossing just shy of $25 million stateside for a cumulative $33 million gross, however, it did shock the industry by landing at the number spot earlier this summer. Now the vampire saga is scaring its way up the Netflix charts.

Thompson’s vampiric horror debut is currently the third most watched title available on Netflix, beating out such titles as Glass Onion (a masterpiece) and Matilda: The Musical (presumably fun—I haven’t seen it).

In The Invitation (not to be confused with Netflix’s other The Invitation), Nathalie Emmanuel’s Evelyn meets long lost family members following the death of her mother. Initially charming, they soon make their intentions known—Evelyn is intended to be wed to their vampire lord.

While the PG-13 rating holds The Invitation back at times, it does subvert vampiric expectations when it counts most, imbuing the story with some compelling mythology and lore. A sort of cross between Get Out and Ready or Not, there’s considerable thematic heft and frightening urgency as Evelyn endeavors to survive the night.

In truth, The Invitation always looked like the kind of movie that would find a home on streaming, and while it’s not one of 2022’s best, it is exciting to see the movie settle into the Netflix horror niche. It’s the perfect accessible horror offering for the cold winter months.

Fiercely female and passably frightening, audiences could do a lot worse than The Invitation.

What do you think? Have you seen The Invitation? Did you even remember that it released this summer? Let us know over on Twitter @DreadCentral.