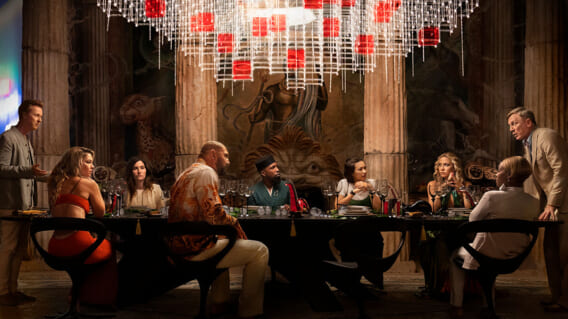 When Knives Out came out 2019, no one knew what to expect outside of a stacked cast (including horror icon Jamie Lee Curtis) and some semblance of Agatha Christie homage. With that in mind, I implore you to approach Glass Onion—the Knives Out sequel which had its world premiere at the 2022 Toronto International Film Festival this past weekend and is set to come to Netflix later this year—with an ounce of willful ignorance. Like its politically charged predecessor, this murder mystery deserves to be witnessed first-hand.

What I will tell you about Glass Onion: A Knives Out Mystery is that while it does tread similar territory to Rian Johnson’s hit whodunnit, it has its own, well, layers to peel away. If the first film playfully attacked generational greed and systemic racism in America, this entry in the Benoit Blanc universe aims its crossbow at other parts of the polarizing puzzle including corporate corruption, climate change and cancel culture. And instead of taking place at an autumnal estate straight out of a Clue playing board, Glass Onion is set on a sun-soaked Greek island belonging to an Elon Musk-esque billionaire (played by a delightfully idiotic Edward Norton).

Aside from the general themes, the one true carryover from the Knives Out to Glass Onion is, of course, Daniel Craig as debonair detective Blanc. And his star-studded stack of suspects this time around? Kathryn Hahn (who most recently bewitched audiences in WandaVision), Leslie Odom Jr. (Hamilton, and David Gordon Green’s upcoming Exorcist sequel), Madelyn Cline (Netflix’s Outer Banks), Dave Bautista (Dune, Guardians of the Galaxy), Jessica Henwick (Game of Thrones), Kate Hudson (soon to be seen in Ana Lily Amirpour’s Mona Lisa and the Blood Moon), and Janelle Monáe (last seen in Antebellum).

While every cast member is committed to Johnson’s latest burn-the-bourgeoisie bit, the clear standouts of this new ensemble are Hudson and Monáe as a bitchy bimbo and jilted genius, respectively. Hudson channels her famous mom Goldie Hawn with an over-the-top turn that makes you wonder why she doesn’t do more movies these days. And Monáe (who has played other electric ladies throughout her theatrical music career and co-starring roles in films Moonlight and Hidden Figures) is perhaps the caper’s crown jewel, especially in her scenes against the endlessly scenery-chewing Craig.

Not quite as naturally uproarious as Knives Out was on first watch, some of the gags in Glass Onion can be grating and even a tad dated (yes, this does take place in a world where COVID also exists). That said, its biggest and brashest stabs at laughs are often balanced against loving Easter eggs planted with both cinephiles and mystery lovers in mind. It is the kind of film, like the one before it, that will warrant multiple rewatches to pick up on all the references and clues hidden by Johnson, who once again serves as writer-director.

Glass Onion isn’t breaking any particularly new ground with what it’s saying or how it does it. But man, is it ever fun to play along as the murderous madness unfolds. If this is the first of many more Knives Out mysteries to come, then I have two words for Johnson, Craig, and Netflix: game on.

‘Glass Onion: A Knives Out Mystery’ is a funny, sunny follow-up to Rian Johnson’s hit whodunnit with killer performances from a very game Kate Hudson and Janelle Monáe.