It's one helluva good time. 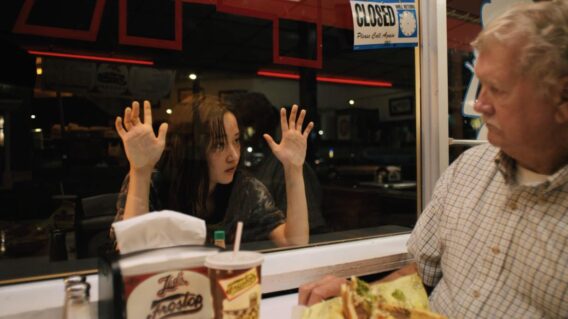 Combining the street-smart grit of an indie drama with the wide-eyed innocence of a family-friendly fantasy adventure is tricky, to be sure. But if anyone can pull it off, it’s Ana Lily Amirpour. The writer-director has built her career on unexpected mash-ups: The vampire western. The druggy post-apocalyptic thriller. Now, with Mona Lisa and the Blood Moon, she’s made the most unpredictable move of them all: a commercially accessible film.

That’s not to say that Mona Lisa and the Blood Moon isn’t full of outrageous scenarios and colorful characters. The film begins in a padded cell the color of cotton candy, where Mona Lisa Lee (Jeon Jong-seo of Burning fame) is tied up in a straightjacket, drooling and humming to herself. She seems lost to the world — until a nurse’s rude comments about Mona’s toenails land the woman in a pool of her own blood on the floor of Mona’s cell.

From there, the film goes on a kaleidoscopic adventure through the New Orleans underworld, as Mona — who, as it turns out, is able to control other people’s actions with her mind — tries to evade a cop named Officer Harold (Craig Robinson) on a mission to send her back to the mental hospital. After a bizarre encounter with a zonked-out pill dealer named Fuzz (Ed Skrien) outside of a convenience store, Mona ends up crashing with Bonnie (Kate Hudson), a Bourbon Street stripper who looks at Mona’s otherworldly ability and sees dollar signs.

After a few nights of scamming drunks and hustling tourists at ATMs, Mona and Bonnie are as good as family. Mona Lisa and the Blood Moon has a real affection for its outlaw characters, all of whom are decent people deep down. Even Fuzz, who initially comes off as predatory, ends up being a nice guy. But the film’s most delightful bond is between Bonnie’s young son Charlie (Evan Whitten), whose interests include heavy metal and drawing, and his new houseguest Mona. Mona helps Charlie scare away bullies, and in exchange, Charlie helps her escape the city when Officer Harold finally tracks her down. Think E.T., but if E.T. was a North Korean refugee with dangerous psychic powers instead of an alien shaped like a turd.

It’s a wild, colorful ride, dressed in skimpy spandex stripper outfits with Cheeto dust all over its hands. The fingernails are long, and the cigarettes are longer. The camerawork is disorienting, the music is pulsating, and the lighting is bisexual. (Fuzz’s kitchen, completely covered in blacklight paint, is a highlight.) The dialogue is peppered with creative insults, and sometimes the accents don’t make a whole lot of sense. Everyone is constantly eating junk food, with an emphasis on egg rolls and cheese puffs. Amirpour even remembers to add a Voodoo priestess to the mix — although she’s on her hustle as well.

It’s a tough-minded, yet tender movie that captures the chaos of NOLA nightlife, as well as the camaraderie that binds residents who make their living separating drunks from their money. But if you’re wondering where Mona came from or how her powers work, you’re going to be disappointed. The supernatural elements of Mona Lisa and the Blood Moon are an afterthought, and you get the impression that Amirpour isn’t particularly interested in answering questions. She’s just here for the party. And if you are as well, then Mona Lisa and the Blood Moon will show you a gaudy, anarchic, strangely wholesome good time.

‘Mona Lisa and the Blood Mon’ is a tough-minded, yet tender movie that captures the chaos of NOLA nightlife, as well as the camaraderie that binds residents who make their living separating drunks from their money.