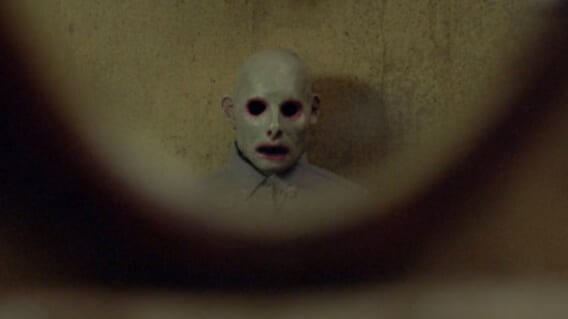 The younger generation has found a home for lost horror on TikTok, and I’m not mad about it. Just like the app’s habit of discovering older music, the massive platform has a way of breathing new life into films once lost to the zeitgeist. Now TikToker itsheidiwong has made a dangerous discovery. Three of them, in fact. The popular creator has made a recent upload recommending three horror movies she’s dubbed as being “UNHINGED”, and I’m here to agree with this diagnosis. I’d personally call these lost horror classics disturbing, but potatoes are potatoes.

The second title on Wong’s list is the heart-breaking indie horror title Possum. An intimate story about a traumatized man and his terrible uncle, it’s a beyond-disturbing tale guaranteed to trigger your arachnophobia. Sean Harris gives a performance here that will ruin your week, making it an absolute must-watch for any horror fan interested in the more dangerous side of the genre. Good luck with this one, TikTok. You’ll need it.

Finally, the last movie suggested by Heidi Wong is the never to be forgotten Kevin Smith horror fiasco Tusk. This totally messed up body horror nightmare concerns a podcaster who finds himself in the hands of a madman who is very intent on surgically transforming him into a walrus. What’s worse, this terrifying movie is now getting a sequel simply titled Tusks. Justin Long acts his heart out in this one, further cementing the fact that he’s a Scream King we are grateful for.

Lastly, what are your thoughts on TikTok discovering these underseen disturbing horror classics? Are they as messed up as we think they are? Let us know on Twitter via @dreadcentral. We’re always around to chat about all things nasty horror!