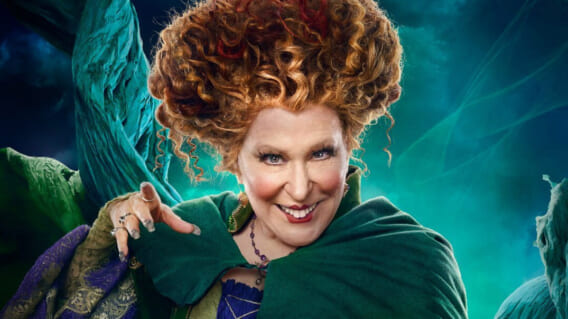 After three decades of slumber, the Sanderson Sisters have finally been revived with an all-new Halloween adventure. Hocus Pocus 2, now streaming on Disney+, is a welcome homecoming for the October favorite, one which fans have been begging to see a sequel to since the original film was launched back in 1993. For years and years, we heard rumours of a new film, and now we finally have one!

Chats about the movie began in the media as early as 2014 when Disney announced a new project about witches was in development by star and producer Tina Fey. Fans wondered if it could be the new Hocus Pocus, but ultimately, this was not to be. Later that year Midler took to Reddit where she was explicit in her intention to play Winifred Sanderson once again. But by 2015, in a similar Facebook interview, she squashed hopes about a sequel’s development. Discussions of a remake came to light, but fans and original cast members seemed disinterested in the idea, to say the least.

Turns out, we were not the only ones anxiously awaiting a new Hocus Pocus film. Star of the series and original diva Bettle Midler has been laying in wait for news on the project for some time now. When asked if she thought the day would ever come, Midler wasn’t so certain.

“I didn’t until the day finally came,” she shared. “And then I realized, oh, we’re really gonna do this. This was kind of a dream come true, it really was. I mean, I’ve been, I don’t want to say, agitating but kind of like after I realized it was actually a phenomenon, I started asking people around my age and people like that, don’t you think they would be interested in a sequel? This was a long time ago. This was like 15 years ago, something like that. So here we are.”

And together they were, as all three original Sanderson Sisters are now revived for the Disney+ sequel. And thank goodness, as Hocus Pocus would never be the same without Bette Midler, Kathy Najimy and Sarah Jessica Parker. Midler was quick to share her feelings on the importance of the sisterhood, and why this type of bond is so important to these witchy movies.

“I think in this world, there’s so much going on in this world that we never really realized until maybe the last 25, 30 years, maybe 50 years, things have changed for women, but things have not changed fast enough for women,” said the icon. “I think these three characters are really in a strange and odd way that they’re really quite positive for women. First of all, they’re very funny, which women are not allowed to be are not supposed to be. And they’re intensely loyal to each other, even though their relationships are… It’s a very broad range of emotions that they live through. And, but I think in a funny way, their bond is very, very strong. So in any situation where women are together, a bond of friendship and sisterhood is really, really important. And then this movie sort of shores it up.”

You can finally watch Hocus Pocus 2 right now on Disney+! Are you as excited about this all-new movie as I am? Let me know on Twitter via @joshkorngut. I’m always around to chat about all things Hocus Pocus!