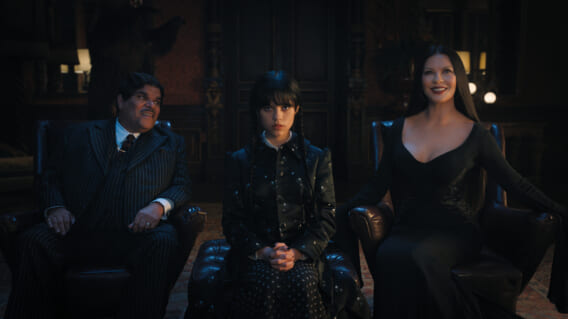 Get ready to snap, Netflix has finally unveiled an official release date for Tim Burton’s Addams Family spin-off series Wednesday. A gorgeous new poster for the gothic affair reveals that the show will land on the streamer in time for Thanksgiving on November 23rd. Check out the artwork below.

The new show is a sleuthing, supernaturally infused mystery charting Wednesday Addams’ years as a student at Nevermore Academy. Wednesday’s attempts to master her emerging psychic ability, thwart a monstrous killing spree that has terrorized the local town, and solve the supernatural mystery that embroiled her parents 25 years ago — all while navigating her new and very tangled relationships at Nevermore.

The Netflix series marks the first time Tim Burton has directed for television in a really long while. The spooky project already has an order for eight episodes by Netflix and production company MGM Television

Are you excited about Wednesday on Netflix? Let me know on Twitter via @joshkorngut. I’m always down to talk about pop culture and horror! Dread Central is now on Google News!