Stephen King is getting corny. 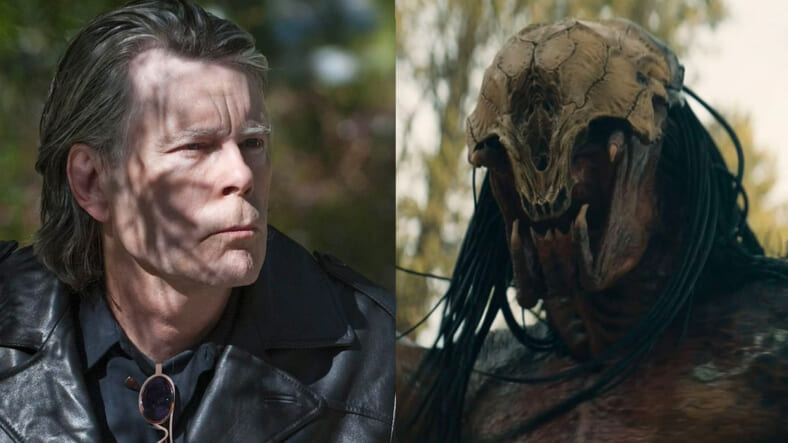 Stephen King is back on Twitter to pitch one hell of a new horror movie. Joking or otherwise, the world-famous author suggests Hollywood pit two of the genre’s most recognizable villains against each other in what would be the strangest match-up in horror history. In the aftermath of Hulu’s excellent Predator prequel film Prey, the novelist now offers a concept I can’t get out of my head: Children of the Corn Vs. Predator. See his Tweet below.

Hulu’s excellent new Predator film hails from director Dan Trachtenberg (10 Cloverfield Lane). It’s set over 300 years in the past and focuses on the Comanche Nation. The action-thriller follows Naru, a skilled warrior who fiercely protects her tribe against a highly evolved alien predator. The screenplay for Prey was written by Patrick Aison who also worked on projects like Kingdom, Jack Ryan and Treadstone. The feature stars Amber Midthunder (Legion) as Naru, the tribe’s only hope against a relentless killer.

Subsequently, Stephen King’s Children of the Corn is a completely different kettle of fish. This 1977 story was originally published in Penthouse before it was added to Night Shift, King’s first collection of short fiction. The piece concerns a couple who find themselves in an abandoned small town overrun by children who worship a demon lurking in a nearby cornfield. Children of the Corn has spawned a long-running film franchise, with ten entries to date. The latest movie is rumored to finally be released this autumn after a two-year delay.

While the author is likely trolling, I can’t help but wonder, what would Children of the Corn Vs. Predator even look like? The kids would need some help from their demonic patriarch if they were to even stand the slightest of chances. That said, I would still pay good money to watch this bizarre monster mash go down. We just don’t get enough versus titles in the horror genre anymore.

Lastly, what do you think? Which Stephen King villain would stand a chance pitted against the Predator? Let me know on Twitter via @joshkorngut. I’m always around to chat about all things Stephen King!