4 Movies Where The Heat Is Scarier Than Evil 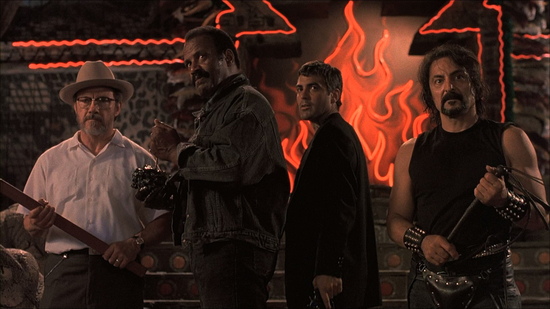 Summer is my least favorite season because I hate the heat. I hate sweating, I can’t stand too much sunlight, and have tapped out of plans with friends that like to sit on patios. I’m not going to pay to eat food while we sweat at each other and the ice in my drink is melting. That’s insulting to my whole person and those friends are still on thin ice. However, because I hibernate in the summer I would be a boring final girl or villain. If you don’t fux with me, then I ain’t fuxing with you from May to September. Unfortunately, the characters below didn’t have the luxury of sitting under the vent and closing their blinds like me. They were out there getting sweaty while catching hands, fangs, and chainsaws from rude ass heat-loving monsters.

Two criminals flee to Mexico and take a family hostage on their way to a truck stop that has a vampire problem. First, everyone in this movie looks sweaty and uncomfortable. Everyone, even the vampires, is coated in sweat and their clothes are telling us stories that the script could only imply. It was way too hot for these brothers to be committing crimes, so I didn’t feel bad for them catching it from the undead. However, I did feel bad for the family they dragged through this heat to this bar of hellish monsters though. To be ripped from a pool while on vacation is the cruelest summer. At the end of the movie Seth (played by George Clooney) gives Kate (played by Juliette Lewis) money because he feels bad about getting her family killed. I have always wanted him to give her all of it for surviving the heat and his creepy brother.

“Teens” take a road trip and find something sinister as usual, right? Wrong! These fools have stumbled into a hot town with a wax museum. So not only are they fighting for their lives in what looks like 900-degree weather, but they are fighting in a wax museum. I’m not the smartest drunk girl on the internet, but I know heat melts wax. Therefore, there is a room set to Satan’s temperature to melt this wax to coat these kids. Which means they are being dragged into a room hotter than the outside. So when they add fire to this in the final showdown, I immediately start crying. That’s three hot topics too many. It makes the ones who died earlier seem like the lucky ones. BRB, I have to go take a shower because of the images that just played in my brain.

Where You Can Watch:  HBOMax and Netflix

A group of bullied kids has to fight a monster that preys on children. Derry, Maine is painted to seem like the ninth circle of hell in this movie. First, it’s super racist. Second, these kids are forced out into the heat of the summer of 89. Have you Googled the medieval contraptions people used to stay cool in the 80s? None of them worked on bikes! Third, this movie took a beautiful Bill Skarsgård and made him into different kinds of gross creatures that I don’t fux with. These babies were out there in the heat getting their asses kicked by evil for a whole movie. Pennywise was playing too much in that heat! If we can’t negotiate a kinder season for him to try to eat me and the squad, then I guess that’s our last summer. I’m not going to be out here in this heat running all over town from clowns who do the most. He can find me in front of a box fan in a window waiting to be put out of my misery.

Five friends driving through Texas encounter cannibals and a chainsaw-carrying guy that likes to wear people’s faces. I can smell this van through my TV. The whole group looks like they used Crisco for lotion because they are beyond moist. If you are already sweating then you don’t want to be driving around Texas of all places. They are already frying before the cannibals even touched them. I would’ve yeeted myself from the van singing “Take Me To The King” long before we ever met Leatherface. If I somehow made it to him, I would’ve given him the Julie James arms and yelled, “What are you waiting for?” I would be the easiest catch because I didn’t do outside for the three years I lived in Texas. I’m definitely not going to battle someone with a chainsaw that probably smells like baked sins out in the sun.

Let me know if you have additions to this list at @misssharai.

Share:
Tags: From Dusk Till Dawn House of Wax It The Texas Chainsaw Massacre