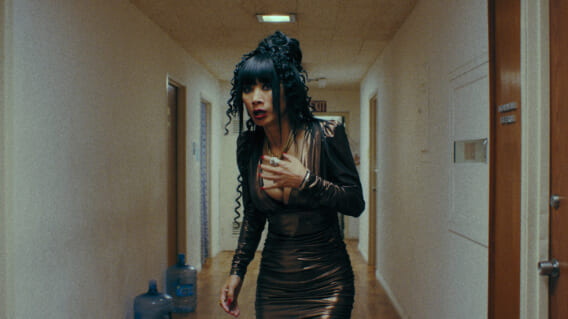 Night Caller opens with a logo for a company called Crappy World Films. But don’t let that turn you off. Because despite the filmmakers apparently having no faith in their own production company, director Chad Ferrin actually managed to deliver a surprisingly thoughtful and atmospheric serial killer story that’ll likely become a minor cult classic.

Susan Priver stars as Clementine Carter, a spiritual medium who has visions of a murder after a disturbed caller phones her hotline. Since the police will clearly not believe her, she decides to take matters into her own hands to track the killer down. Luckily for Clementine, her paralyzed father (Robert Miano) happens to be an ex-cop. He offers her some useful tips and clues throughout her crusade to hunt down the killer, although he ultimately ends up getting more involved than Susan would have liked.

Also Read: ‘Mona Lisa and the Blood Moon’ Is Here For A Damn Good Time

The killer himself (Steven Railsback) is an absolute psycho who brutally dismembers his victims and keeps body parts in his freezer. He also has visions of his father (played by The Walking Dead’s Lew Temple in an entertaining cameo), who was sentenced to death for similarly horrific crimes, visiting him to explain that he needs to be doing more. Whether the visions are genuine or just in his head will be up to you to decide. But there was no doubt that Night Caller presented us with an unforgettable villain.

Clementine, on the other hand, is depicted as a cunning and resourceful woman. Regardless of your thoughts on the validity of spirit mediums, there is no doubt that she wants to use her apparent gift to benefit others. Even though she ultimately ends up getting involved too deeply in her crusade for justice, it becomes clear that Clementine will stop at nothing to put an end to the killing spree. She proves to be a likable and believable character, thanks in no small part to Priver’s strong performance and a competent script that never presents her as being too perfect or too flawed.

The game of cat and mouse between the psychic and the deranged serial killer eventually reaches a thrilling climax. Without going into spoiler territory, we will say the somewhat ambiguous ending of Night Caller will have most viewers pondering the outcome for years to come. That’s not something that can be said about most movies. So even those of you who are skeptical when it comes to the actual validity of spiritual mediums will still probably be thrilled by this disturbing tale of psychics and killers.

Whether you happen to be an adamant believer of a hardcore skeptic when it comes to spiritual mediums, you will still probably be hugely entertained by Night Caller.