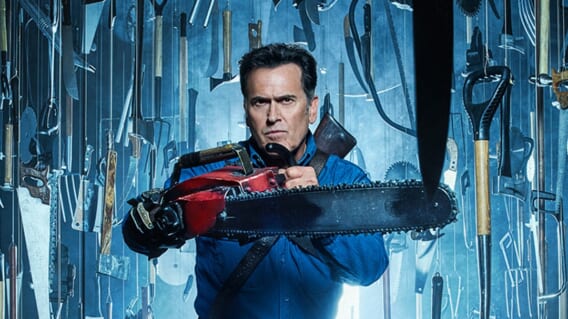 Horror fans who splurged for the Evil Dead: The Game Collector’s Edition set this week are treated to a fun surprise. The package came with The Art of Evil Dead: The Game which happened to include a fresh conversation with horror legend Bruce Campbell. Most interestingly, the actor had some tonal teases when it comes to the upcoming Evil Dead Rise.

Here’s what Bruce Campbell had to say about Evil Dead Rise:

“I’m very excited about it. It’s going to be really cool and very, very intense. It’s dark, a very adult Evil Dead movie,” Campbell said of the forthcoming sequel. “I wouldn’t call it a yuck fest – it’s pretty tough, pretty hard-hitting stuff. And that’s the variation that you have within the Evil Dead franchise and within horror itself. It’s all about the filmmaker.”

“It’s [about] a single mom who now has to deal with this book. These days it’s more about the book. That book gets around. Passed along, people try and get rid of it, they try to bury it or destroy it and they really can’t. So this book just keeps popping up, so really it’s just another story of what happens if this book appears in this particular group of people’s lives and how it intersects.”

Are you a fan of Evil Dead? Are you excited for Evil Dead Rise to hit HBO Max? Let me know on Twitter via @joshkorngut. I’m always down to talk Evil Dead and all things horror! Dread Central is now on Google News!