The star and director explore the deeper themes within this summer's most thought-provoking horror film. 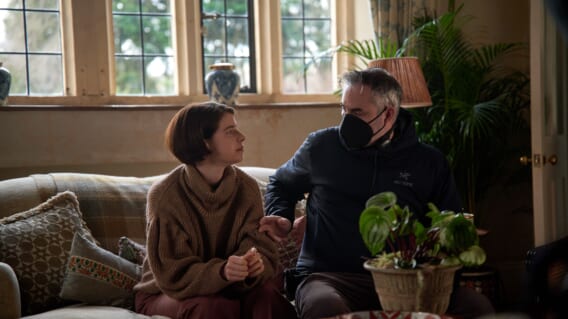 Men, Alex Garland’s latest cinematic happening, is sure to divide audiences. It’s a challenging experience to endure. Deep psychological and sexual underpinnings form a much more complicated set of rules that lurk behind the usual tropes of the genre. The male and female relationships in Men are undeniably combative even though the production process was highly collaborative between director Alex Garland (Ex Machina, Annihilation) and rising star Jessie Buckley (Beast, The Lost Daughter).

Now, that a lot of horror fans have seen Men after a successful performance at the box office, many of us are still processing what we witnessed on screen. That ending! Speaking with Garland and Buckley in a recent interview, we talked about how their creative instincts allowed them to elevate incredibly difficult subject matter and why they both wanted to reimagine the classic idea of a monster movie.

Inspired by John Carpenter’s The Thing and the body horror of Attack on Titan, Garland wanted to shy away from the indelible classic horror tropes we easily recognize. “I try to avoid making movies about other movies,” he declares.

“I’m aware that other films will filter into the thinking. In Men, there’s a first-person running shot toward a house. Even as we were setting up, I thought, ‘Oh, yeah, Evil Dead,’ right? So that happens, but I’m not doing knowing nudges and winks toward the audience. It’s more like straight-up influence. Which is borderline theft, you could say, or unconscious theft, but I really do avoid doing that. I always think that filmmaking is a very broad church and I know a lot of movies are incredibly keen to be referential and knowing to other movies. And I get that and it’s fine and I’m not criticizing it but it’s not something I want to do. I’ll make films with an awareness of other films but I try to make the movie about something not to do with cinema, something in the real world.”

Garland’s pre-production ritual was already highly collaborative in his previous films. But with Men, the director wanted to develop a vision that intimately involved the cast every step of the way. Looking at “the whole of the filmmaking process,” he explains:

“From preproduction to shooting and then in the edit staying alive to the possibilities and changes and not letting things get concretized. There are different ways of making films. Some people board everything and execute the storyboards and have an incredibly clear idea of what’s going to happen. But I don’t. I say to the actors in the rehearsal stage, this script is still fluid and open and we can make changes and find stuff. I go out of my way to make sure that remains true during the shoot and then in postproduction.”

A huge part of the process, Buckley was able to inform her character and give her strength from within. Her version of Harper became much more than just a final girl horror cliché.

“In some ways,” says Buckley, “Harper is somebody who is ultimately choosing life in some shape or form, even if that means facing the scariest thing she has to come to terms with. And also, she’s being chased by all these monsters of some sort. But for me, there is something complicit in that she has agency within that. She isn’t a victim, she’s somebody who is actually walking toward that horror instead of running away from it.”

If you’ve seen Men, Buckley’s assertions are right on. Harper’s isolation is amplified by the decision to have her acting counterpart, Rory Kinnear, play multiple, domineering roles. Both Buckley and Garland want the viewer to decide why that is. “There are all sorts of ways of making movies in terms of how many questions you can answer,” according to Garland.

“Film typically wants to answer all questions that it poses and I’m a lot less interested in that. So, you have one actor playing all these roles and it’s obviously not arbitrary. It’s not that all these characters happen to look the same. There’s obviously a decision being made. So one question might be, does Harper see all men as the same? Because neither Harper nor the film ever remark on it, ever. It’s only the viewer left to remark on it. So is it that Harper sees all men as the same, while they are in fact different. Or is it that all men are the same and she doesn’t see that? The way I see it, those are two questions that sound very similar, but have completely different inferences.”

In the film, Buckley reacts wonderfully to the many faces worn by Kinnear. She relished being a part of such a unique acting challenge.

“Every time he would step on set as a new man, the whole tone and mood on set, not just with me but with the whole crew would change. Like when Geoffrey came into the room, it was party time! There was a lightness about Geoffrey and we all absolutely loved him. But when the priest came on, it was quite scary. There was a sharp undertone to him that felt unnerving. That’s a testament to Rory as an extraordinary actor. When you have somebody like him who is so brilliant, it’s such a huge feat and such a delicate and quite bold line that he had to thread every single day. And it was seamless, where you felt like whoever came on set, that was who was in front of you. It was never Rory being that person, it was just absolutely that person.”

In our recent interview with Kinnear, he revealed that Garland himself would actually step in as another makeup artist to make sure his vision was fully realized. “There was quite a lot of leeway with most of the characters I created but with the Green Man, [Garland] was incredibly exacting about it,” Kinnear exclusively revealed. “I realized early on how much it meant to him and how long he had seen this character. In fact, usually the last fifteen or twenty minutes of makeup was him doing my makeup. That was rewarding to see how passionate he was about getting this, which is essentially an icon, to get it to a place where it sat with how he had seen it. He came in as a third makeup artist towards the end.”

The through-line of rebirth is pervasive in Men, as the jaw-dropping (or jaw-splitting) ending graphically depicts. For Garland, if he’s not provoking an audience, he’s not doing his job.

“I feel if I’m not being subversive, I’m wasting my time. I get really fucking bored by so much stuff and it always makes me want to disrupt it and subvert it. And that’s how I keep waking up in the morning. The point of the film is to be playful and irreverent and sometimes use genre conventions but also be aggressive and sort of disruptive. For me, the dream is that somebody watches this movie and does not simply forget about it while they’re walking out of the cinema.”

Synopsis: In the aftermath of a personal tragedy, Harper (Jessie Buckley) retreats alone to the beautiful English countryside, hoping to have found a place to heal. But someone or something from the surrounding woods appears to be stalking her. What begins as simmering dread becomes a fully-formed nightmare, inhabited by her darkest memories and fears in visionary filmmaker Alex Garland’s (Ex Machina, Annihilation) feverish, shape-shifting new horror film.