Who or What is The Green Man in ‘Men’? Rory Kinnear Talks About His Multiple Roles [Exclusive Interview] 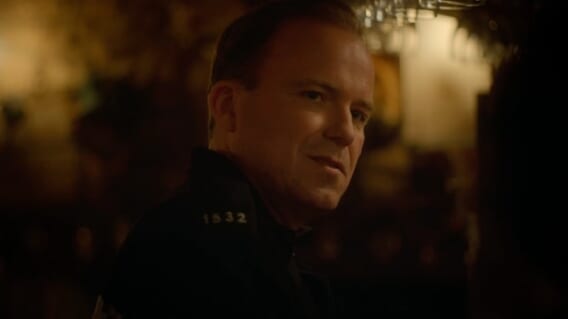 Rory Kinnear may be best known as the MI6 bureaucrat Bill Tanner in the James Bond franchise but that’s about to change. Horror fans will most likely remember his tragic portrayal of The Creature in Penny Dreadful. However, everyone is going to be talking about the unsettling performance (well, performances) the acclaimed British actor gives in Alex Garland’s challenging new film, Men, opening in theaters this Friday. Aside from actor Paapa Essiedu, who plays the late husband of Jessie Buckley’s character, Harper, Kinnear plays all of the male roles in the movie. Eight to be exact.

The chance to play a multiplicity of roles is typically only reserved for comedies like The Nutty Professor. It’s rarely, if ever, seen in a horror film. Kinnear walks a tightrope throughout Men, transitioning back-and-forth between believable, flesh-and-blood characters. For the trick to work thematically, these characters have to feel like invading forces that all want something different from Harper, the only woman in Men.

Somehow, Kinnear and Buckley feed off each other’s performances to create a real sense of grief and terror throughout Garland’s film. One character, in particular, referred to as The Green Man, was crucial to the movie’s success. Kinnear and Garland, along with the makeup artists, created an ancient folkloric creature that exists somewhere in between pagan and Christian symbolism. In our conversation below, Kinnear talks about the challenge of playing multiple roles, not realizing that Men was a horror movie, and how Garland’s passion for The Green Man led to the creation of a new kind of icon.

Rory Kinnear: The second time. The first time seeing it, you’re always sort of piecing together the decisions that have been made from the bit of knowledge that you have in terms of making it. Seeing it yesterday was like seeing what the actual film is and what an audience might get from it. And also, being in an audience of people who don’t know what to expect which will probably be the only time it happens without any kind of foreknowledge of any aspects of the film which, presumably, will begin to leak out and will start to influence the way that people watch it.

I think people will, hopefully, keep their traps shut. There are some incredible sequences in this. Are you a fan of the horror genre in general? Were you looking to do something in the world of horror when you first heard about this idea? I know that Jessie Buckley and Paapa Essiedu said that they’re scared to death of horror movies.

I don’t mind horror films. It’s not really often something that I will seek out to see. Certainly, there were aspects of Penny Dreadful that I did that used the horror genre as well. I played Frankenstein’s Creature in that. I guess maybe because I’m not a sophisticated cineaste, I didn’t really pick up on the fact that [Men] was a horror film. It felt like it was a really distinctive piece of provocation.

Obviously, being asked to play loads of different parts was fun. But why I thought it had value and had some success to it was the fact that it was a really distinctive take on examining the effects of trauma. I thought the idea of me playing all these parts, as attractive as that was, I also knew that it was being done for a reason. That it was being done for a thematic reason and potentially an impactful one that could only be successful if…I was devoted to the development of each character as much as the last. Just because one character had a small amount of screen time, I had to make sure I knew that character inside out, as well.

There was lots that was obviously intriguing and there was lots that I felt had potential pitfalls in terms of how big a swing that the film is. But as soon as Jessie and Alex and I got together and began rehearsing, began talking, began working on it, you realize that we’re all coming at it from a similar sort of point. We all enjoyed the aspects of each other’s working processes that gave us confidence and comfort to try and push the envelope ourselves.

You mentioned Frankenstein’s Creature in Penny Dreadful and that’s such an incredible performance. It was probably where I really started following you as an actor. How did the makeup effects in this compare with something like Penny Dreadful?

Yeah, Alex’s first thought was this is about performance not prosthetics. I think that, obviously, the Green Man figure was a big makeup. That was like a seven-hour-er. I think we got the Creature down to about three and a half on a good day. There is something about those big makeups, particularly when you do them repeatedly where you get into a zen mode. For Men, it was very much from creating the characters from their own biographies and stories rather than necessarily creating the characters from the outside in.

You’re only credited as Geoffrey in the end credits, I believe. Were there ever any other names for the men you portrayed or did you give them their own names at all?

Yeah, they all had names. I wrote a biography of each one of them which I sent to Alex and then sent to Lisa [Duncan] and Nicole [Stafford], head of costume and makeup, so that we all were getting to work together. I was sort of relying on them to make suggestions but they were able to make their suggestions from a place that I understood because I had fermented it. Rather than them doing a lot of work down a path that I wasn’t gonna go.

You’ve given Shakespeare performances in the theatre that must’ve been incredibly draining. How did this performance or performances stack up against all of your theatre work? I wasn’t expecting to see so much physicality from you in this.

Well, yeah it’s pretty elevating. There’s usually a lot of time on set where you’re not doing a lot. This was an experience where there was not much downtime and that was really lovely. If I’m away from home and I’m working, I love to work and don’t necessarily enjoy not working. So, yeah, to have so much asked of you and to hope to respond as fully as they wanted, that was really a rewarding challenge.

If I wasn’t filming then it was quite often testing out another look or trying to go through the process of the Green Man. Alex [Garland], he was…There was quite a lot of leeway with most of the characters I created but with the Green Man, he was incredibly exacting about it. I realized early on how much it meant to him and how long he had seen this character. In fact, usually the last fifteen or twenty minutes of makeup was him doing my makeup. That was rewarding to see how passionate he was about getting this, which is essentially an icon, to getting it to a place where it sat with how he had seen it. He came in as a third makeup artist towards the end.

That collaboration sounds pretty unique. The ending of Men is incredibly shocking. I’m still processing it. Was that ending originally in the script or did you know exactly what you were going to have to go through and endure?

No, I mean I’m pretty naive! I just feel like things will work out. When I first said yes, it was different. Another draft through and I was like, Oh, I see. I knew that it potentially had a greater impact and a greater sense of distinctiveness. I didn’t know how the hell it was going to be done. When you’re filming it, you’re only doing fifty percent of what’s going to be onscreen. So that sense of leaving it up to someone else’s creativity to fully round out was kind of a leap of faith. They all seem to want to get something from Harper and how they did that and how they went about it, I guess, was similar to all the other scenes. Obviously, there was a lot more blood.

You’re fantastic in this. I don’t know if you’d ever want to host Saturday Night Live but I want to start a petition now and I think Men is the perfect audition.

Yeah, I’m not sure about the topicality of it but we’ll see!

Men arrives in theaters on May 20th.