The 10 Best Horror Films And Series Set In A Shopping Mall, According to Reddit

Let's hit up the Pinkberry. 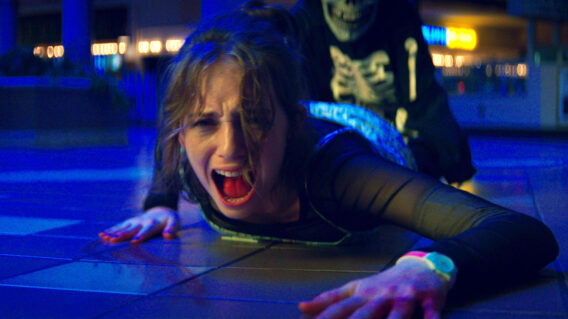 Mall horror is all the rage lately. You’ve got teen creeps Stranger Things and Fear Street taking full advantage of the liminal mall aesthetic, sure. But horror has been taking place in within the walls of shopping malls since the beginning of time. Horror mainstays will no doubt immediately think of classics like Dawn of the Dead; a horror film rooted in the basic carnage of capitalism and consumerism. But what else is out there?

Today Reddit is taking a pitstop at the food court and ordering up the best uses of a mall setting in horror films. Redditor thomastheturtletrain asks: beyond Chopping Mall and Dawn of the Dead, what are the best horror films set in a mall? And the front page of the internet is back with reliably twisted answers.

Check out what Reddit credits as the best horror titles set in a shopping mall:

Note: While P2 is not technically a mall setting, it was still top ranked.

Produced by Horror Hero Alexandre Aja in 2007, P2 was an intense lo-fi horror show set in the parking lot beneath a Manhattan shopping mall on a very cursed Christmas Eve. While it may not be mall-proper content, you’re getting the liminal one-two punch of Christmas Eve and parking garage glory. This chiller stars Wes Bentley and Ravel Nichols. It was inspired by the terrifying real-life incidents of women in Paris being attacked in underground garages.

The final act of 2002’s exceptionally underrated creature feature Eight Legged Freaks has some killer shopping mall action. This David Arquette vehicle came out in 2002 to squash the big scary spiders and we are appreciative. The original title for this monster mash featuring giant spiders was Arach Attack, which makes me laugh every time I remember it. The plot for Eight Legged Freaks concerns a colony of spiders who are exposed to toxic waste and the rest is hairy history.

When searching out liminally charged horror, starting out with Are You Afraid of the Dark? is always a safe bet. Released in 1992, this season one finale of the YTV horror anthology saw its protagonist trapped in a mall. But the twist? He’s also trapped in a metaphysical pinball game, with each level of the shopping mall acting as a different level of his pinball fantasy game. It’s a stone cold classic and demands to be rewatched as a stoned adult.

John Dies At The End

This 2012 outside-of-the-box horror comedy hails from Phantasm filmmaker and all-around exceptional talent Don Coscarelli. It’s based on the book of the same name by author David Wong and concerns zombies, extra-dimensional mayhem, and the end of the world. While John Dies at the End failed to perform at the box office, it has since gone to achieve cult classic status. The conclusion to the strange film has some serious mall energy and is worth checking out.

Night of the Comet

Fans of Buffy the Vampire Slayer take note, Night of the Comet is an original teen girl fight back gemstone. Released in 1984 by filmmaker Thom Eberhardt, this sci-fi horror comedy stars Catherine Mary Stewart and Kelli Mahoney as survivors of a bizarre comet-induced apocalypse. Cited as an inspiration for the character Buffy Summers, this micro-budget camp classic raked in ten times its budget. Definitely worth investigating this cult classic if you haven’t seen it yet.

This outrageous modern Canadian horror comedy from director Elza Kephart will not be ignored. Co-written by Patricia Gomez, this title concerns a pair of demonically possessed jeans who have violence on the brain. The gore is present in this one, and it definitely upholds the mantle instilled by movies like Rubber. Slaxx is a solid reminder that retail is one hell of an industry.

The opening kill in Fear Street Part One: 1994 is shopping mall horror at its finest. The mood is impeccable throughout the entire three-part Fear Street movie series, but the liminal vibes of this first entry are undeniable. Horror hero Leigh Janiak flexes real hard with these entries, which are co-written alongside Phil Graziadei and Kyle Killen. I doubt you need reminding that the Fear Street films are based on the book series of the same name by icon R.L Stine.

Phantom of the Mall: Eric’s Revenge

When a new shopping center is built on the site of a terrible accident, murders and mayhem soon unfold. Phantom of the Mall: Eric’s Revenge is a prime example of late 80s insanity. This one stars Pauly Shore, Derek Rydall, and Ken Foree who are all doing the absolute most. Not the highest quality mall horror example on this list, but it still deserves a spot for its outrageousness. And for Ken Foree. We love Ken Foree.

By the summer of 1985, Hawkins Indiana is hit by the construction of the Starcourt Mall. This industrious monstrosity starts to drive other businesses out of town. It also soon becomes the stomping grounds for all things inter-dimensional nonsense. The colorful and fun aesthetics of the Starcourt Mall are a perfect addition to the Stranger Things series. The new season is getting ready to drop, however, Stranger Things fans beware: the series is set to end after the eventual fifth season.

The second Zombieland film found itself trapped in development hell for years before finally seeing the light of day in 2019. Ten years after the first film, the second installment made the inclusion of Rosario Dawson and scene stealer Zoey Deutch as Madison. Deutch’s Madison played the typical blonde archetype. However, she goes on to become the best part of the film with her limited screen time. Found living inside of a Pinkberry freezer in a mall, Madison joined the ranks of Tallahassee, Columbus, and Wichita and we couldn’t be more grateful.