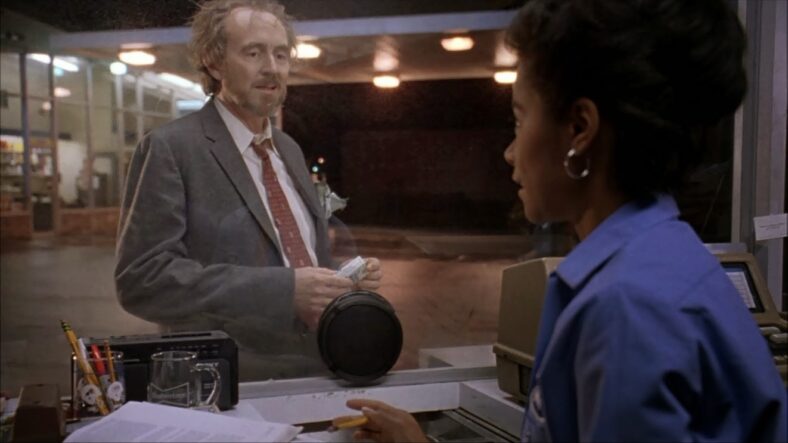 What is it about gas stations that give me the serious spooks? Is it because these liminal spaces exist in-between the action of our day-to-day lives—just sitting there—impatiently waiting for us to fill up our tanks and drive away? Or maybe this fear is not always totally irrational. Occasionally these filling stations offer more than just an average level of strange to their twenty-four-hour availabilities. Sometimes, empty public spaces crawl with very real dangers, especially for those of us traveling alone.

Today I’m exploring five of the scariest gas stations that horror has to offer. From Fred’s Oasis in The Hills Have Eyes to The Black Museum in Black Mirror, here are some of the creepiest rest stops you’ll ever have the misfortune of visiting.

To capitalize off of the success of HBO’s Tales From the Crypt, Showtime began developing their own cheeky horror anthology series in 1992. The network hired genre heroes John Carpenter and Tobe Hooper to create Body Bags, with Carpenter even playing a Crypt Keeper-esque coroner character during its wraparounds. Showtime would ultimately get cold feet with Body Bags. They instead released the project as a DTV anthology of three stories directed by Carpenter and Hooper.

The standout segment? “The Gas Station”, helmed expertly by Carpenter himself. Featuring fun cameos by the likes of Wes Craven, Sam Raimi, and David Naughton, this stylish and moody chapter will leave you spooked and in suspense. Alex Datcher delivers an excellent performance here as Anne, a young woman who braves her first night shift at an isolated gas station. “The Gas Station” also happens to take place outside of Haddonfield, Illinois — so you know a serial killer is just bound to show up.

“Black Museum” acts as the finale of the fourth season of Black Mirror, the second to be released via Netflix. The episode received mixed reviews on release, with critics complaining of the segment’s mean-spirited tone. And they’re right. “Black Museum” is brutal, upsetting, and often fairly difficult to watch. One of Black Mirror’s most explicitly horror chapters, “Black Museum” takes place at a remote and dusty highway-side gas station that houses a disturbing attraction. An anthology within an anthology, the episode tells three different stories of experimental technology gone very wrong.

Letitia Wright costars as Nish, a young woman who listens to the three terrible exhibits narrated by the gas station and attraction owner, Rolo (played by Douglas Hodge). Bleak, bare, and brutal, “Black Museum” is one of Black Mirror’s most audacious episodes. And for a Charlie Booker series, that’s really saying something. Wright also happened to earn an Emmy nomination for her role in the episode.

The Hills Have Eyes

In 1977 Wes Craven unleashed his outrageous and unrelenting sophomore effort, The Hills Have Eyes. Violent and scary, the indie cult favorite was written, directed, and even edited by Wes Craven himself. The film concerns an American family driving through the Nevada desert as they encounter and attempt to survive a clan of mutant cannibals. One of the classic’s main set pieces is Fred’s Oasis, the only gas station for miles. Fred turns out to have an extremely dark connection to the murderous people living in the hills. But I won’t spoil that here.

When the father of the stranded family walks his way back to Frank’s Oasis, he’s ultimately captured, crucified and burned beyond recognition. It’s a shocking death that proved that The Hills Have Eyes was a dangerous indie horror release, in line with Craven’s first film The Last House On The Left. It would eventually rack up four entries total, all of which had Craven’s involvement to some degree. The 2006 remake was helmed courtesy of High Tension director Alexandre Aja and was produced by Craven.

Stephen King has the horror-of-cars market downright cornered. The master of scary literature has used the monstrous car trope countless times over the past sixty years. From the literary and (and eventually cinematic) classic Christine, to his bizarre novel From A Buick 8, King is undoubtedly the King when it comes to vehicle horror. And what do cars usually require? Gasoline, of course. This leads us down the line to 1986 when King took it upon himself to direct his very first (and only) feature film. Maximum Overdrive was thus born, and we all still have questions. Was it comedy, horror-comedy, or something altogether different? Hard to say. But it’s certainly a midnight classic for schlock fans of all varieties.

Maximum Overdrive concerns a modern world where all machinery has turned violent towards humankind. Vending machines and radios become dangerous nuances, but it’s the mega trucks that turn society upside down and inside out. The incredible cast, including Emilio Esteves, Pat Hingle and Lisa Simpson (uh, I mean Yeardley Smith), who bunker down at a roadside truck stop for survival. “Trucks”, the short story this bonkers film is based on, would go on to spawn another, much worse adaptation in the late 90s. Say what you will about Maximum Overdrive, it’s watchable as hell.

Even though the seventh Halloween entry reeks of post-Scream studio panic, it still stands tall as one of the best sequels in the franchise. Halloween H20 brought back Laurie Strode in a blazing fire of glorious self-defense. H20 manages to handle a post-traumatized Laurie with brazen fearlessness, and better yet, very few guns. I know Halloween (2018) has its fans, but I can’t help but compare the two legacy entries for the way they handle Laurie’s trauma. In my feels, H20 does this with more respect to the character and just a little bit more nuance.

There is another way in which Halloween H20 battles it out with its 2018 counterpart. I’m still unsure if the parallel gas station scene was crafted as an homage to H20’s rest stop scare, but it seems fairly likely. In H20, a young mother and her daughter stop to use the restroom at an isolated toilet. Relatable and scary daytime horror for the books. 2018 uses a similar setup but ends up spilling A LOT of blood. Both scenes are scary as hell and are both iconic entries into the Michael Myers canon.