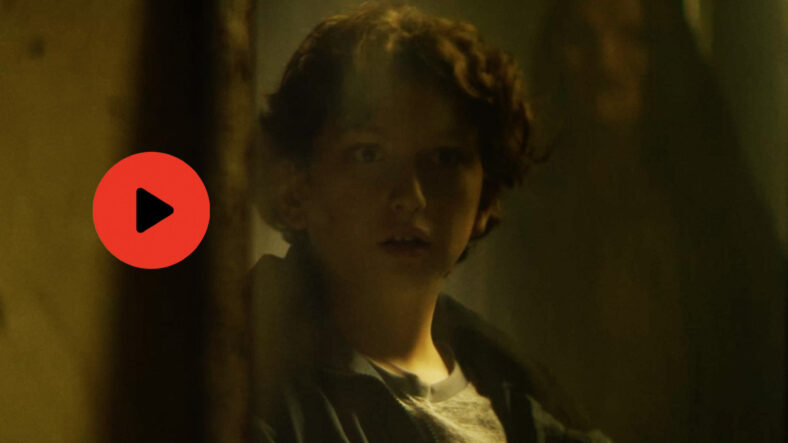 If you’re a fan of spooky urban legend horror with a psychodrama twist, then we’ve got the trailer for you! Today we are excited to share an exclusive promo for Slapface, a scary genre festival hit which sees release next month via Shudder.

This trailer is here to snatch you up and drag you into the woods, so get ready for a good spooking. Trust us, you’ll want to take a peek at the trailer for this DREAD production.

Slapface is a downright chilling family affair unlike any other you’re gonna watch this year. After the death of his mother, Lucas, a loner who lives in a rundown home with his brother Tom, regularly seeks solace in the nearby woods. With his only “friends” being a group of female bullies, he keeps to himself most of the time. But, after a strange encounter with an inhuman monster, Lucas begins to withdraw from others. The two reach trust and a bizarre friendship is born. Soon Lucas is swept up in a series of primal adventures.

Slapface, which won the “Best Audience Award” for “Best Horror/Thriller/Sci-Fi” Film at the Cinequest Film Festival in 2021, was written and directed by Jeremiah Kipp (Black Wake; 60 Seconds to Die ‘Monster’; The Sadist; The Pod) based on his short film of the same title. The film stars August Maturo (Girl Meets World, The Nun), Mike Manning (Son of the South, Teen Wolf), Dan Hedaya (The Usual Suspects), Mirabelle Lee (Blood Ties), Lukas Hassel, and Libe Barer (Sneaky Pete), Bianca D’Ambrosio (The Bay, I Am Mortal, Fear of Rain), Chiara D’Ambrosio (The Bay, I Am Mortal).

Lastly, what did you think of the Slapface trailer? Let me know on Twitter via @joshkorngut. I’m always available to chat all things urban legend horror!