Spoons can in fact be instruments. 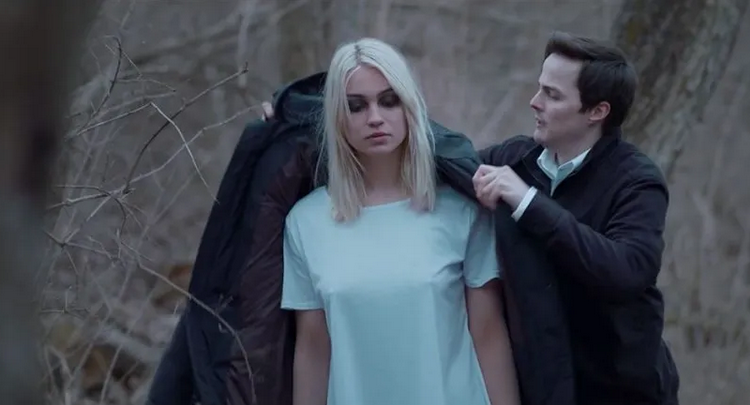 Sylvie Mix’s Double Walker (Mix wrote, produced and stars) is now available in theaters and OnDemand. In case you aren’t familiar with the film, it follows a young Ghost (Mix) as she haunts her cold Midwestern hometown, trying to piece together the horrific flashes of memories from her past. One by one she kills the men she believes were responsible for her death, though her plan is derailed when she meets Jack (Jacob Rice), a kind movie theater usher who inadvertently intercepts as she’s stalking her next victim. While Jack takes her in and offers her a glimpse at a normal life, her desire to avenge her own murder lingers on.

Horror fanatics know that any object can be turned into a killing device, whether it be an ice skate in Halloween H20, a dog door in Scream, or even an icicle in Black Christmas. In Double Walker, the weapon of choice happens to be a sharp spoon. The film’s composer, Mark Hadley, wanted to incorporate this into the score. Aside from using normal instruments such as a gong and vibraphone, he recorded different piano parts using a spoon to strike the strings and other parts of the piano. The end result was exactly what Hadley and the film’s director Colin West wanted it to be: an ominous, musical tone poem. Hadley discusses this and much more with Dread Central.

Dread Central: What was it like working with director Colin West? How was your experience with him on Double Walker different than previous films you have worked on with other directors?

Mark Hadley: Working with Colin West is always a pleasure because we have a great friendship and mutual admiration for one another. The experience was different perhaps in that our discussions began really early in the process.

DC: Sylvie Mix stars in the film, but is also the writer and producer. Did she give you any notes about the score?

MH: She’s amazing and no she didn’t give me any notes about the score.

DC: How do you decide what level the score needs to be? For example, in Double Walker, sometimes the score is front and center, and other times it is faint in the back.

MH: I don’t necessarily make that decision as the movie gets to its final mix, however I try to score dynamically so that adjustment isn’t always needed.

DC: The score in horror projects tends to be more prominent than in other genres. Knowing this, did you feel any extra pressure to deliver?

MH: In a sense I suppose, I think horror is a particular genre and presents some interesting challenges with scoring, so it can certainly take time and experimentation to find what’s right.

DC: Are you personally a fan of horror? Was there a particular film that made you appreciate the genre more?

MH: I do love horror films, always have since I saw Scream. My favorite horror film is It Follows, that score had a big impact on me, as did the score for Midsommar. I think some of the more innovative films in the genre have really broadened what the term Horror even means and that is super inspiring to see so much expansion within the genre.

DC: A spoon plays an important part of the movie. We heard you incorporated a spoon into the score, can you elaborate on that?

MH: Yeah, I always try to make the score and film as cohesive as possible, and sometimes that can be as literal as striking the strings of my piano with a spoon at certain points.

DC: What do you consider to be the most important job as a composer, when working on a project?

MH: Maintaining clear communication with the director and editor.

DC: You also scored one of the installments of Into the Dark. Is working for Blumhouse any different than working with other production companies, because they are pretty much dominating the horror world at the moment?

MH: Well, it was certainly a treat to work on that film because in addition to it coming from Blumhouse, the writer and director Maggie Levin was incredible to work with, and co-scoring it with Keeley Bumford was super fun. The project was special. I always want to do my best work.

MH: I’m working on some original music for my artist project Hark Madley.

You can find Mark Hadley’s score on Apple Music.