Carpenter's fingerprints are all over Johannes Roberts' vision of 'Resident Evil.' Here, the writer-director shares a list of examples. 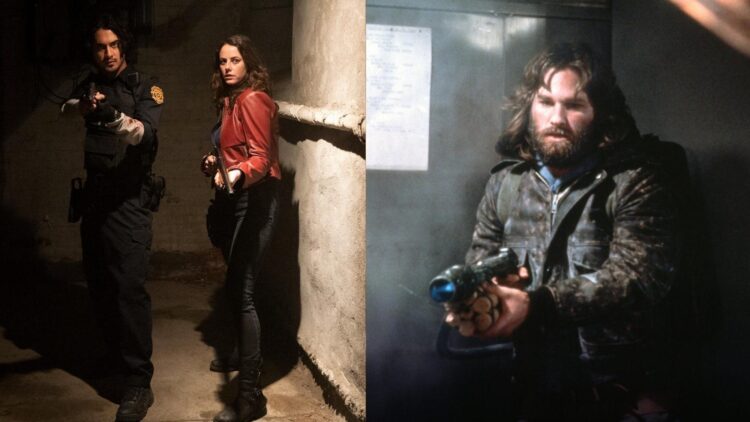 Resident Evil: Welcome to Raccoon City director Johannes Roberts really loves John Carpenter. Ever since he first started talking about his new Resident Evil movie, he’s hinted at how much of his style and storytelling are straight out of Carpenter’s playbook, and he isn’t overstating the case.

From its approach to building tension through atmosphere, to the abundance of wide shots in its visual language, to its darkly comic sensibility, Roberts’ vision of Resident Evil is unmistakably cut from Capenter’s horror filmmaking cloth.

“The big thing that I took from Carpenter is, Resident Evil: Welcome to Raccoon City is very much Assault on Precinct 13. It’s a siege movie. You have an ensemble cast; it’s a group of people coming and meeting at the police station. And I tried to make the cinematography not flashy. I love using widescreen anamorphic lenses, like a Carpenter movie, and I love taking his style of setting scenes up.”

“The Leon character very much comes out of an amalgamation of Jack Burton [from Big Trouble in Little China], Napoleon Wilson [from Assault on Precinct 13], and MacReady [from The Thing]. They’re all built into his character.”

“The biggest thing that I loved putting in this movie was the humor. Assault on Precinct 13 is dry, it is a suspense thriller. But I always find it to be one of the funniest movies. Even The Thing has really beautiful moments of humor, with Kurt Russell pouring whiskey down into the front of the computer. And obviously, you’ve got Big Trouble in Little China. I loved that, and I thought, ‘That’s how I’ll engage with Carpenter. He makes me enter a world through humor.’ I really tried to bring that in.”

“As a director, you always get that period where you’re like, ‘I don’t know if this is working. Have I fucked this up?‘ Any director reading this will know what I’m talking about—the low ebb.

I remember my low ebb: Coming home, we were shooting nights and I was just lost. It was such a tough shoot during the pandemic. It was so cold and everybody was in masks and coats, so you couldn’t communicate with anybody. The feeling was quite isolating; it felt like making The Thing. I was like, ‘Wow, how am I gonna get through this?‘

As I sat there, there was a copy of The Fog on my table. One of the producers had left it there for some reason. I put it on and everything came right in the world again. I just saw the wood for the trees, and I was just like, ‘Oh God, this guy…‘ It gave me my love of [filmmaking back] and I just understood how I should do it.”