How ‘Resident Evil: Welcome to Raccoon City’ Returns to the Games’ Scary Roots 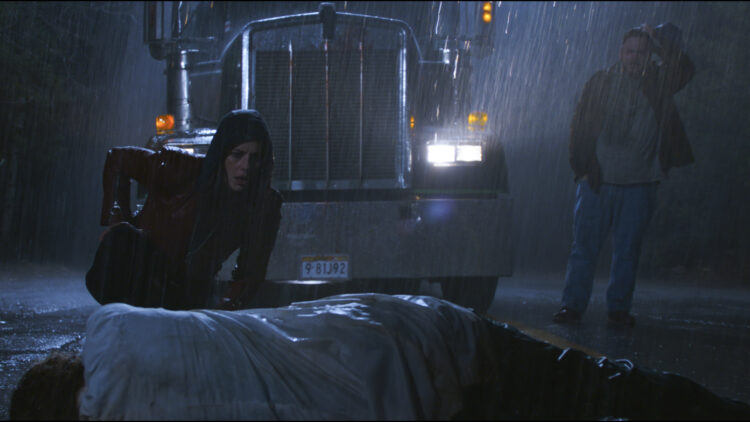 Resident Evil: Welcome to Raccoon City director Johannes Roberts has a soft spot for Paul W.S. Anderson’s Resident Evil films. But he says he never felt overshadowed by them when he made his movie—mainly because they don’t have much to do with the actual games in the series.

“With the previous [films in the] franchise, it was its whole separate thing. It was Paul and Milla [Jovovich] and it was their world,” Roberts tells Dread Central. “It was a sci-fi action, very shiny, quick-cut, clean world that was not really rooted in the games.”

Once he and his team began developing Resident Evil: Welcome to Raccoon City, Roberts decided early on that the film needed to restore the grimy and dingy atmosphere of creators Shinji Mikami and Tokuro Fujiwara’s survival horror classics. “The reason we’re rebooting the franchise is not to do more of the same, but to actually go back to where this started and create the Resident Evil that myself as a fan of the games would love to see,” he says.

To make Resident Evil: Welcome to Raccoon City as scary as its source material, Roberts believed that its horror needed to come from the series’ characters as much as it did from its faithful world-building.

Anderson’s vision of Resident Evil was centered around Alice (Jovovich)—an ass-kicking amnesiac who never appeared in the original games. Conversely, Roberts’ reboot follows Claire and Chris Redfield (Kaya Scodelario and Robbie Amell) and Leon S. Kennedy (Avan Jogia), all of whom are essential to the first game’s ensemble-driven story.

“I love the previous franchise [installments] and I absolutely love Milla. But it was never the games; it was the Alice show,” Roberts explains. “I wanted Claire, Leon, and Chris to be the leads. I wanted them front and cent[er], rather than subservient to another character… to tell this scary, creepy story set in this dying small town. And to be emotionally engaged with these characters, rather than have action and fighting and stuff. It’s rooted in characters’ emotions, beliefs, and drives, and the horror all [comes] from that.”