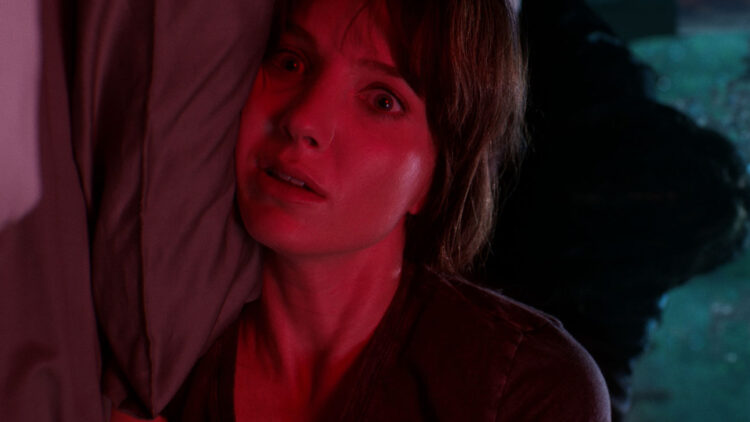 Malignant is a divisive title, isn’t it, fright fiends? On one hand, the film’s seen as such a stitched-together mess of tired tropes and silly twists that even the most hardcore James Wan fans have a hard time defending it. On the other, it’s a fun romp with homages to several genres of ‘80s horror for us Basket Cases out there, dishing out ludicrous ideas and bountiful streams of blood.

Which camp do I fall into? Take a wild guess.

An unapologetically campy movie like Malignant shouldn’t have gotten a normal theater release. These types of trashy flicks don’t get that kind of special treatment anymore, if they ever really did. But let me tell you, the amount of joy I get from the fact that it found its way to the big screen is IMMEASURABLE. This beautiful train wreck of story structure and logical sense is the shit I live for. Though I wasn’t a huge fan of Wan before, I sure am now! And now everyone else must experience the schlock with me! Christmas came early!

Granted, any enjoyment Malignant offers is heightened by a “healthy” amount of love for the older films it’s attempting to imitate. But I’m not here to deep dive into what the tick to this movie’s tock is. Nope, it’s my job to give you some flicks to pair with it for a late-night mini-marathon, especially since its physical release hits stores today. This is Double That Feature, after all. It’s kinda what I do here.

First, a rundown of Malignant. Wanna help me out, IMDB?

“Madison is paralyzed by shocking visions of grisly murder. Her torment worsens as she discovers that these waking dreams are in fact terrifying realities.” – via IMDB.

Thanks, IMDB. Owe you one.

Now that’s out of the way, let’s get to the (exposed, bloody, beating) heart of the article. Sharpen your razors, grab your picnic baskets, and turn up that Goblin as we explore the weirder side of horror.

“A young man carrying a big basket that contains his extremely deformed, formerly conjoined twin brother seeks vengeance on the doctors who separated them against their will.” – via IMDB.

Everybody’s talked about Basket Case. It’s one of the most beloved cult flicks out there, having garnered a loyal fanbase and cemented its place in horror history (thanks to Joe Bob Briggs). If you want more on all that, In Praise of Shadows put together an in-depth video dealing with the whole franchise.

I don’t personally care for it, though. Shock and awe, right? I didn’t really grow up with it, and when I finally got around to watching, it didn’t do much for me. I admire the work that went into the movie and what it did for indie horror filmmaking. But that’s about where my love ends. Don’t think it’s bad or anything. Just… eh.

Despite my personal feelings, I recognize the influence it had on Malignant. It’d be a crime not to include it on here. I’m sure the feeling is mutual with a lot of y’all. Don’t worry, I understand. I got you… in a grip as strong as Belial’s.

Watch Basket Case digitally here or own it physically here.

“A young girl who has an amazing ability to communicate with insects is transferred to an exclusive Swiss boarding school, where her unusual capability might help solve a string of murders.” – via IMDB.

Remember Clock Tower? The video game from back in the 90s? Not the one for PlayStation, I’m talking about the Super Famicom game. Keep that in mind when watching this flick, especially the last act.

Here we are with another Argento feature. Or is it the first one I’ve talked about? Whenever I try to think about it, it feels like I’m in some sort of heavily-stylized, non-linear dreamscape… I digress. Anyway, I love Argento, which should be an obvious statement from the guy named Giallo Julian. I also like to breathe air and eat food.

“Master of the Thrill” Argento got experimental during the 80s, taking on more bizarre film concepts, essentially creating what big brains call “cinematic fever dreams”. A great example is this movie right here: Phenomena, or, as it was known in the States, Creepers.

For the most part, it’s his standard Giallo fare that proved successful many times before. Except it has a schoolgirl that can talk to bugs, a wheelchair-bound scientist with a diaper-wearing monkey assistant, and a lil’ killer pig-boy that has maggots growing out of his face. OK, maybe it’s not standard for the most part. But those classic Gialli elements are still there! Black gloves, brutal deaths, killer POVs, great soundtrack, all this and that.

Mr. Wan was very open with Malignant‘s Giallo flare, particularly inspired by the “more out there” 80s features, of which there are plenty. I decided to go with Phenomena because it’s probably the weirdest Argento flick from this period. I’m pretty confident about that. Or maybe Inferno was weirder? It’s all getting fuzzy again…

Watch Phenomena digitally here or own it physically here.

“A late-night TV presenter receives a snuff tape, in which a woman is brutally killed. She decides to take a crew out to a location indicated in the tape, but only death and despair await them.” – via IMDB.

Let me go ahead and stop y’all right there. Despite its title, this flick has nothing to do with the Evil Dead franchise, so don’t go thinking you missed a memo or anything. It’s just a condensed version of the actual title, Trap of the Dead Spirits, used in an attempt to cash in on a better-known franchise. You know, like how the Italians used to do (appropriately enough, as you’ll soon see). Are we on the same page now? Good!

It’s a movie I heard the Horror Guru talk about years ago, but I didn’t actually watch until a month or two back. Unearthed Films did a solid Blu-Ray release of it earlier this year. Some subtitle-tracking issues, but no dealbreakers. Worth a purchase if you dig the flick.

After watching it, I looked up the director, Toshiharu Ikeda, to see what else he’s done. There are a few Super Sentai episodes, a supernatural horror flick or two, and a decent amount of what I assume to be Pink Films. That makes sense, given that this flick was supposed to be a vehicle for Japanese adult film star Hitomi Kobayashi. However, Ikeda was unsure of her acting ability, so he put her in a supporting role rather than the lead. How was her performance? As far as I can tell, it was fine, but the language barrier might be doing some of the work for her.

This is a J-Horror Giallo feature heavily influenced by Dario Argento. There’s that name again. I might get side-glances for this, but I think it manages to surpass most of Argento’s stuff as far as brutality and absolute strangeness goes. To be completely honest, this might be my favorite Giallo. Ever. I know more people classify it as a Slasher, but it has enough Gialli flavor that I’m comfortable enough placing it in. You know, black gloves, brutal deaths, killer POVs, great soundtrack, the same blood as before except now it’s flowing through a new set of bizarre, twisted veins. If you want to talk about the weirder side of the genre, this is it in both style and narrative.

Let’s talk about the death scenes, which are full of creative splatter, great bloody visual feasts for the gorehounds out there. It’s impressive, especially considering the low budget, with people being suddenly pierced by wall spikes and hidden blades swinging out of ceilings into well-placed skulls. The killer is quite something as well, loving to travel the classic knife route down the murder highway, but also spicing it up by making things spark and explode through some sort of psychic power. That sounds eerily familiar.

If there was any movie I think had the most similarities with Malignant, it’s this one, for a myriad of reasons that’ll become very apparent after watching them back-to-back. I haven’t heard anything suggesting that Wan has seen this flick, but I can’t help but wonder. It has blood and gore and weirdness, so it has my vote for this pairing.

Oh, wait, I forgot something! The killer also likes to put his victims in elaborate, homemade deathtraps. That also sounds familiar, almost like-

“Two strangers awaken in a room with no recollection of how they got there, and soon discover they’re pawns in a deadly game perpetrated by a notorious serial killer.”

James Wan’s debut theatrical feature! The one that put him on the horror map and solidified his name to watch for. Poetic, don’t you think? Pairing his first film with his latest? Maybe it’s just me.

Do I have to go into depth about this one? I’m pretty sure most of y’all, if not all, are familiar with the first entry in this series. I’ll do a real quick summary and call it done: fun premise, cool traps, Danny Glover and Cary Elwes are there, and an instant classic twist ending. Bullet points are done, let’s move on!

There’s another reason I chose this it over others, again relating to Giallo. The Gialli influence can be felt as far back as here, hinting to Wan’s interest that ultimately accumulated in Malignant. Granted, they aren’t big callbacks, and are relatively few, but they’re there.

A black-gloved antagonist is seen several times before their identity is revealed, a puppet is used to enhance the eeriness of the situation (ala Deep Red), hell, even the colored lighting could be argued to have ties back to Gialli. Maybe I’m looking waaaaaay too deep into this and am starting to see Giallo in everything I watch now. That’s always a possibility.

In any case, it would be an interesting experience watching these two together, seeing the humble, tense beginnings of Wan’s career, then the batshit, fun schlock of Malignant.

Side note back to Evil Dead Trap: that movie has a scene where a character uses camera flashes to light their way through a dangerous area, much like that one scene in Saw.

Watch Saw digitally here or own it physically here.

Despite the numerous razor-wielding killers and rusty death traps, we made it to the end! Some blood loss, sure, but all pain, some gain, or whatever they say. I might have accidentally made this a quasi-Giallo article, but if anything, that strengthens my arguments, and I’ve come out on top after all! Probably.

Malignant hits the shelves on Blu Ray/DVD today, or you can get it digitally.