5 Meta Horror Films That Deserve Their Moment in the Spotlight

If you like your horror with a wink and a nod, be sure to add these oft-overlooked meta movies to your viewing list. 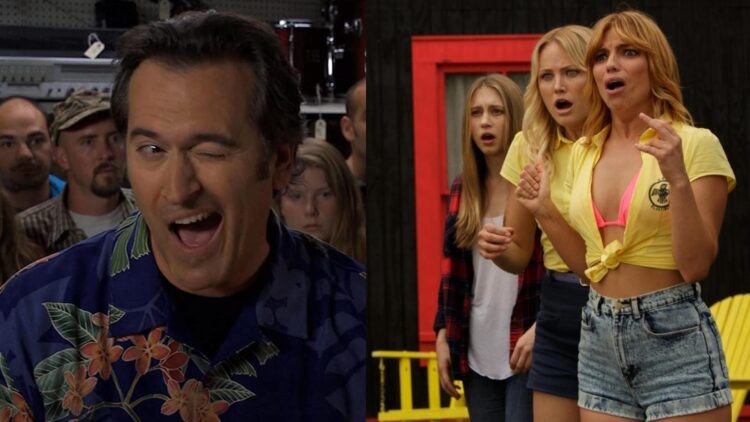 When done correctly, meta horror has the ability to connect with its audience in ways that other films may not be able to. Self-referential humor and in-jokes have the potential to make the audience feel as if they are a part of the story. Scream famously demonstrated just how effective that approach can be.

Also Read: These 8 Horror Films Brilliantly Channeled the Essence of the ‘80s and ‘90s

Since Scream was released, films like Cabin in the Woods have delivered good-natured send-ups of the genre and received accolades for doing so. But for today’s purposes, I’d like to deviate from the beaten path a touch, and shine the spotlight on a few films that don’t always get the love they deserve when the conversation turns to standout efforts in self-referential horror. With that in mind, here’s a curated collection of meta horror suggestions that deserve their moment in the limelight.

Scott Glosserman’s Behind the Mask deconstructs and pokes fun at some of the more outlandish tropes from the slasher genre, while simultaneously embracing, and even showcasing, said tropes. The flick sees the titular character followed by a documentary film crew while he stalks and hunts his intended prey. The film nods to so many other slasher greats and even features cameos from a number of familiar faces. Behind the Mask is a love letter to the horror genre that deserves way more appreciation than it gets. Sure, the film has a loyal cult following. But Glosserman tried for years to get a sequel to the meta slasher off the ground with no luck. Hopefully, we will eventually see the director’s vision for a sequel realized. But until then, Behind the Mask remains an above-average stalk-and-slash flick with ample wit and self-referential commentary on the genre.

This is a great example of a film that may have been a little too ahead of its time. Joseph Kahn gave fans a hefty helping of ‘90s nostalgia a few short years before the ‘90s made a cultural resurgence. Had it seen release today, I suspect there would have been a larger audience for this frenetic flick. This meta horror film features countless pop culture references, time travel, and a killer that has taken their name and likeness from a horror film.

Detention caught a lot of flak from critics for being all over the place. And it certainly is. But that is part of the film’s charm. The flick captured the essence of what it means to be a teenager in a world that never stops moving. This is a movie that requires more than one viewing to catch all of the pitch-black comedic one-liners and pop culture references contained within. If you took a pass on this one after the less-than-enthusiastic reaction from critics, consider giving it a chance and making up your own mind.

The Final Girls is beloved by horror fans that have seen it. But in spite of being a smart, heartfelt send-up of summer camp slashers, the movie is far from making its way into the collective consciousness in the way flicks like Scream, Cabin in the Woods, or even the tragically ahead of its time New Nightmare have. The Final Girls is very self-referential and makes great use of the film-within-a-film trope.

This flick also deserves credit for making the audience feel something. It’s rare that I walk away from a horror picture thinking about the relationships between the central characters. But this is a case where I had that precise reaction. Taissa Farmiga is terrific, relatable, and authentic as lead character, Max, and Malin Akerman is equally noteworthy as Max’s mother. She convincingly conveys a mother’s undying love for her child. The pair sells the relationship dynamic with a level of believability that isn’t often seen in slasher fare.

Student Bodies is one of the earliest examples I can recall of meta horror as we now know it. This movie ribs the slasher genre in the same good-natured manner as Scream, but it did so a whopping 15 years before Wes Craven’s film was released and went on to become known as the gold standard of meta horror. Student Bodies is funny, silly, and even features an on-screen kill count to give viewers the feeling that they are in on the joke. Is it perfect? Certainly not. But the film has heart, and it effectively satirizes the slasher at a time when the genre was still defining itself. Student Bodies was way ahead of its time and deserves to be seen by a larger audience.

My Name is Bruce

This overlooked treasure features Bruce Campbell playing a fictionalized version of himself, and the results are frequently hilarious. Campbell does triple duty as director, star, and co-producer of this comedic farce. My Name is Bruce sees Campbell kidnapped by a fan who hopes that the esteemed actor can help rid his town of an unintentionally unleashed malevolent presence. Campbell misunderstands, thinking the set-up is somehow tied to a film role and part of a birthday surprise. The flick is self-referential, self-deprecating, and really funny. Campbell is good-natured about lampooning himself and the kind of films with which he’s associated. With a fanbase as sizable as the actor has amassed, it’s surprising this feature doesn’t seem to come up in more conversations. If you’ve somehow overlooked it, I humbly suggest giving it a spin.

Which of these meta horror films are among your favorites? What’s missing from this list? Let us know in the comments below or on Facebook, Twitter, or Instagram. Dread Central is now on Google News.

Tags: Behind the Mask The Rise of Leslie Vernon Detention My Name is Bruce Scream Student Bodies The Final Girls