As Lord Pyrantin, Oswalt imbues his character with all the pomp and perversion one might expect from a power-drunk prince. 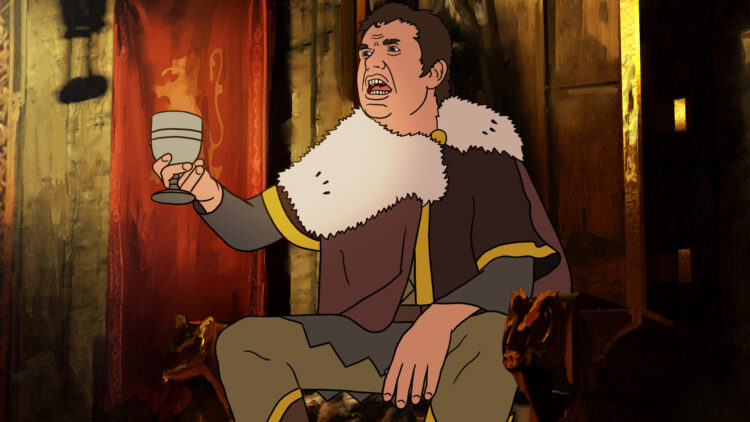 Coming off of a much-hyped festival run this year, the hyper-violent animated horror-fantasy The Spine of Night finally gets its theatrical and digital release this week. Directors Philip Gelatt and Morgan Galen King’s feature not only oozes with style, but harks back to the glory days of rotoscoped animation once pioneered by Ralph Bakshi.

Also Read: Could The Spine of Night Start a Rotoscoping Renaissance?

In this exclusive clip from the film, a bone witch named Tzod (Lucy Lawless) faces down the sniveling Lord Pyrantin (Patton Oswalt). Oswalt imbues his character with all the pomp and perversion one might expect from a power-drunk prince. And as Tzod, Lawless counters his repugnant threats against her with fierce indignation.

Oswalt and Lawless are joined in The Spine of Night by a stacked cast that also includes Richard E. Grant (Can You Ever Forgive Me?), Betty Gabriel (Get Out), and Joe Manganiello (True Blood).

In the film, “an ancient dark magic falls into sinister hands and unleashes ages of suffering onto mankind. A group of heroes from different eras and cultures must band together in order to defeat it at all costs.”

At this year’s Fantasia International Film Festival, the directors said they believe that the rotoscoping technique they used for The Spine of Night could become a staple in genre filmmaking again. “I think it has potential to open this up to independent people doing smaller, weirder projects,” said King. “This could have some kind of renaissance.”

The Spine of Night opens in select theaters, on demand, and digital October 29, 2021, courtesy of RLJE Films.