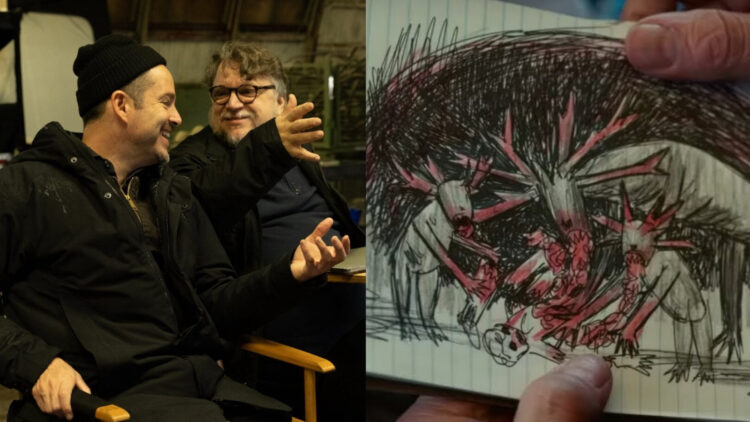 When they set out to make Antlers, their feature adaptation of Nick Antosca’s short story “The Quiet Boy,“ director Scott Cooper and producer Guillermo del Toro knew that they each had something the other needed to achieve their vision.

Their film’s visceral title would allude to the gnarled appendages on the head of its mysterious monster. And this particular beast would need del Toro’s flair for fantastic creature design and Cooper’s insight into Native American mythology.

That’s because the creature of Antlers is a Wendigo. In First Nations folklore, the Wendigo is a feral, forest-dwelling spirit with an insatiable appetite for human flesh.

Cooper’s 2017 Western, Hostiles, earned praise for its authentic depiction of Native Americans, which was informed by Indigenous Nations consultant Grace L. Dillon. To deepen his understanding of the Wendigo, Cooper turned again to the Portland State University professor’s expertise.

“Grace is the foremost authority on the Wendigo,” Cooper told the crowd at Antlers‘ Beyond Fest 2021 world premiere. “I would send her drafts of my screenplay and the concept art from concept designer Guy Davis, and she would educate me on exactly what the Wendigo meant.”

Depictions of the Wendigo have varied for as long as it’s existed. In fact, there’s no known evidence to suggest that an antlered version of the creature actually originated in Indigenous lore. (It’s more likely that the humanoid deer demon that wreaks havoc in Antlers is a composite of sorts—something first dreamt up by the Algonquian people, reinvented by the 18th-century European fur traders who discovered it, retold by English and American authors, and finally reborn out of Cooper and del Toro’s shared imagination.)

Still, Dillon assured Cooper that his singular take on the Wendigo would honor the essence of the myth. “Even though it manifests itself in many different ways, it’s first and foremost a spirit,” Cooper says. “And I wanted it to be the spirit of lonely places. It feeds off of our own worst instincts, or our potential for darkness. It’s a metaphor for a lot of the ills that are coursing through American life. Grace seemed to think all of that really made sense.”

Antlers‘ setting, in an eroded Oregon mining town, also influenced the physiognomy of the creature. “We discussed that it should feel like it’s a part of the Earth’s core,” Cooper continues. “It comes from a mine—hence the embers on its exterior, which is almost like an iron ore.”

Like so many monsters in the del Toro mold, the Wendigo of Antlers is mired in tragedy. Once latched onto a human body, the spirit spreads its sickness until its host is unrecognizable to their loved ones.

Cooper credits del Toro with adding key details to accentuate the creature’s ruthlessness. “It was Guillermo who said, ‘What if it doesn’t have eyes? Because you can’t really negotiate with it,'” he says.

As crucial as nailing the look of the Wendigo was, Cooper was also selective about how much of it he’d reveal to audiences.

“I kept saying to my team, ‘If you look at Jaws, the less you see of the shark, the scarier it is. If we can just [delay] seeing the creature until as late as possible, it’ll have more impact,'” he recalls. “Doing that allows your imagination to go to places that I could never fill.”

“If you demystify everything, that’s not really the key to a successful story,” Cooper adds. “I like to pose questions and let the audience come up with their own answers. And if you can do that long enough, then once the Wendigo comes along it all comes together.”