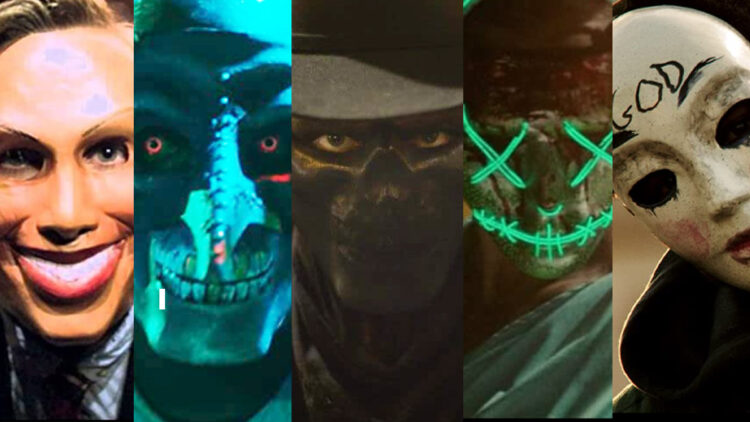 The concept of The Purge is lean, mean, evergreen, and ingenious.

James DeMonaco’s 2013 dystopian horror-thriller, and the sequels, television series, and haunted attractions it spawned, are fueled by one horrific hypothetical: Once a year, America observes a national holiday during which all crime, including murder, is legal for 12 hours.

Like most other artisans of terror that came before him, DeMonaco dreamt up the premise as a response to his most basic fears and unshakable life experiences. What he didn’t know was that his one great idea would capture morbid imaginations the world over and evolve into a bonafide fright film franchise.

With his fifth installment in the series, The Forever Purge, now under his belt, and a script for a sixth, still-untitled entry pending studio approval, we asked DeMonaco to tell us how he created and expanded his dystopian universe, and what it takes to make an enduring horror franchise. —DC Editors

As told to Chad Collins

My concept for The Purge started in the early 2000s.

I was living in France, making a French-financed movie out there, and I noticed that I didn’t know any French people who had a gun. I had this immediate, visceral reaction: “Wow, no one has a gun here.” It was so different from my experience in America. I’d talk with the French about the relationship Americans have with guns (and violence in general), which I had only just started to perceive while living in Europe.

Sadly, at that time, mass shootings were also becoming very prevalent in America, and that was terrifying. I don’t know why, but I’ve always been terrified of guns. To me, they’re the most horrific instruments. I grew up on slasher films, so to me, a gun is even scarier.

Also Read: Revisit the Day The Purge Was Released

Later, my wife and I were driving in New York on a street called the Gowanus—this crazy street that connects Brooklyn and Manhattan—and suddenly, this son-of-a-bitch drunk driver cut us off. We got into a tizzy: I got into a fist fight with the guy, cops showed up… an insane situation. Amidst that madness, this guy literally almost drove us off into an overpass and killed us. We nearly went down hard.

My wife is a doctor and a wonderful woman. So, what she said then was, for her, quite nihilistic. But in the heat of the moment, she said, “I wish we all had one free one a year.” She was angry, but I knew what she meant. And that idea—of “one free murder a year”—stayed with me.

All of these experiences coalesced in my head. My thoughts that I had brought back from France merged with what my wife had said. Then, one day I woke up and said, “I have an idea for a new ‘holiday,’ in a dystopian future America.” It would be a nice metaphor to deal with gun control, or lack thereof.

And so, The Purge was born.

But the film was never intended to be a blockbuster. It’s amazing that I’m even talking about The Purge in the context of a “franchise” today. Back when we wrote our early drafts, producer Sébastien K. Lemercier and I counted some 37 rejections of the script. People felt it was way too anti-American—and also that it was way too small. But when Jason Blum came in, he saw the potential of the conceit, and here we are.

Expanding the scope of The Purge in the first sequel was a huge endeavor.

Sébastien was with me everywhere I went on the set of the first film. At that time, I said to him, “You know, the purge is America-wide. It’s the size of the country. There will be members of the audience who’ll be quite perturbed that we’re not showing how large this conceit is.”

This never occurred to me when we wrote the script for the first film, but it did during the shoot. People would want to know what’s happening during the purge throughout the streets of America. That’s certainly what I would want to see as a genre fan.

When we did test screenings for The Purge, many people in the audience said, “Wow, I wish we got to see more.” But we had a $2.5 million budget! We were very much ingrained in the Blumhouse small world at that point.

That’s why, during post-production on The Purge, I included a credits sequence, set to the Claude Debussy song “Clair de Lune,” that showed some small glimpses of past purges. I wanted to hint at what was happening on the streets, because the first film was so contained.

Even in the middle of making The Purge, I knew that if we ever had a chance to make a second film, we had to get into the streets—into an inner city. The Purge: Anarchy would have to cross through the entire city, a la The Warriors. We had to eventually open up the scope—for the audience, and for myself, too. Going back to something confined would’ve been a big mistake.

The Purge: Anarchy was a natural extension of the first film: We move across America and meet this anti-hero, Leo, played by Frank Grillo. I loved working with Frank and thought the character was great. So, when the head of the studio, Donna Langley, said, “We need to bring Leo back” in the third film—The Purge: Election Year—I felt the same way.

With Frank on board, I wanted this film to get into the idea of a resistance. Not every American is pro-purge. The Purge: Election Year would start to deal with how people would fight back against the purge. We explored that idea a little bit with Michael K. Williams’ character, Carmelo, in The Purge: Anarchy. But with The Purge: Election Year, we opened it up to revolutionaries—to what would happen if a politician was really going to take the purge away if they were elected into office.

I always approached each film in the franchise differently in terms of genre. With The Purge: Election Year, I wanted to do an assassination political thriller. This was my attempt at doing a 1970s-style, Three Days of the Condor-esque story.

The seed of the idea, here, was also to delve deeper into the politics of the purge. People are fighting and there are revolutionaries out there working against the evening. The studio was more nervous about the political thriller aspects of this script than any other Purge film’s. And that was understandable, because that aspect was the trickiest we ever had to pull off.

The Purge films became more and more political, there’s no way around it. As someone who follows politics, it’s only natural… I can’t help myself. It just happens that when I’m writing these stories, the current climate of our country seeps into them.

In all of these movies, the ruse the government puts forth is that the purge is some kind of social catharsis that’ll make you a better person. That’s what they’re selling to the people as a “benefit” to society: peace 364 days of the year, with one day of chaos.

What the purge really is is an economic conceit, to get rid of the lower class and the disenfranchised so that they don’t have to be taken care of financially. By eliminating that class—no Medicare, no public housing—a great financial burden is lifted from the governing apparatus.

I’ve always said that The Purge is a sociopolitical concept. So, it’s funny to me that some people were shocked that the series would become a little more overtly political.

At the same time, while the studio has allowed us to do a lot of political content inside a genre piece—which is rare—they do reel me in. They have a check-and-balance system where they may tell me if they feel I’m going way too far. Both Jason and Universal President Peter Kramer are wonderful in pulling me back: “DeMonaco, you’re going crazy here! Let’s bring back the rhetoric.”

It’s a balancing act. You don’t want the audience to feel too much like you’re preaching to them. Ultimately, we’re still making dystopian horror-thrillers.

Still, the series’ cultural commentary has only gotten stronger since I stopped directing each new movie.

When Gerard McMurray came in to direct the fourth film, The First Purge, he told us that what he loved about The Purge was its socio-political commentary. For him, the series was a metaphor for not only the Black plight, but the plight of all other disenfranchised people in America. That’s why we hired him: He brought out the political dimensions of the series even more.

Everardo Gout, the director of the fifth Purge film, really brought out the series’ socio-political elements. He and I were kind of a dastardly duo.

The first idea I had for the The Forever Purge was that it would be a love story. I wanted to follow two Mexican immigrants as they come to America, to find out whether the American Dream was still alive for them.

The studio was very scared by that. But when I came up with the “forever purge” concept—that society didn’t stop purging, and it was like a virus that you can’t contain—they liked that.

This is the God’s honest truth: After I finish every single Purge film, I always tell the studio, “That’s it! I’m done! I don’t have another one in me!” And each time, I truthfully mean it. But then, somehow, eventually I wake up with a new idea. I find that I have to finish the process and free my mind before I can come up with the next one.

Also Read: The Forever Purge Review — Brutal, Bleak, and the Best of the Bunch

So, I didn’t get that idea for The Forever Purge until after we made The First Purge. And I may sound like an idiot, but again, after this fifth film, I said, “That’s definitively it!” (I mean, I did kind of end America by the end of The Forever Purge.)

And yet, I woke up four or five months ago and I came up with a sixth film. When I pitched it, everybody seemed to love it, so I wrote it. I don’t know if it’ll get made, but the script is done.

Sadly, there always seems to be discord in America. The last two regimes, especially, have led to many thoughts of different kinds of purges. I wish this was completely untrue—that there was pure harmony inside our country. But with everything that’s in our political atmosphere, there could always be a new movie.

Today, there are other countries that are trying to make their own versions of The Purge, from India to Japan. Did I ever know, early on, that this concept would resonate with so many people across the globe? It’s weird to wrap my head around, but I’ve been thinking about it over the years.

I don’t have some great answer as to why. But my hope is that people just find the idea at the core of these films inherently scary. There’s a simplicity to the concept: one night of legal crime, this new holiday.

It’s terrifying for a number of reasons. If what you’ve feared the most is being murdered, and murder is temporarily made legal, how and where would you hide? There’s also the creepy reality that some people like the idea of a purge. That’s what’s terrifying to me: that some people might say, “OoOoh… I could purge! I’ll go beat up my neighbor!”

I hope The Purge isn’t successful for that reason. That would say some very bad things about humanity. But you never know.