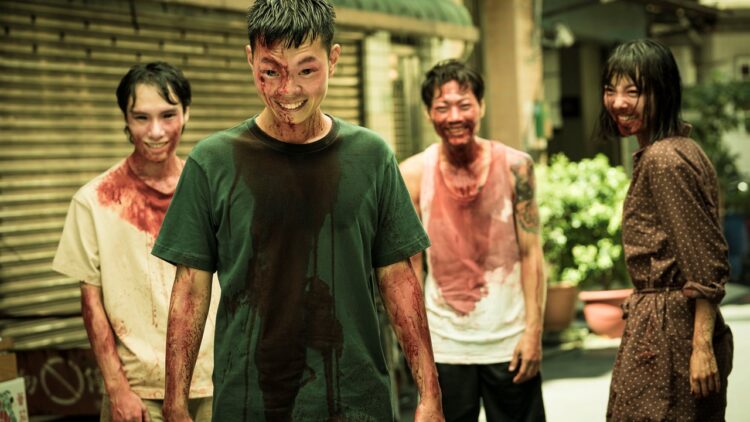 After a year of “home invasions” in the form of virtual screenings and online events, this October sees Grimmfest returning to the cinema at last. The festival team is delighted to announce that from October 7th to 10th, they will be back at their regular venue, Odeon Great Northern, Manchester, with four whole days of movie premieres, Q&As, talks, parties, and exclusive events. Thanks to Odeon cinemas who have been supporting Grimmfest in these trying times.

They’ll be welcoming back some established Grimmfest favorites with their much-anticipated new films, alongside dazzling debut features from the next generation of groundbreaking genre talent.

The festival will open in fast and furious fashion, with the English Premiere of Jim Cummings (Thunder Road, The Wolf of Snow Hollow) and PJ McCabe’s (The Block Island Sound) outrageous black comedy The Beta Test, which takes the popular 80s thriller trope of the successful man who torpedoes his comfortable life with an ill-advised sexual liaison and spins it into a savage satire of preening toxic masculinity and the hollowness of Hollywood success. Stylish and surreal, it plays like a farcical fusion of American Psycho and Entourage, and features an astonishing lead turn from Cummings.

But while it might feel good to be out at the cinema again, don’t come to Grimmfest expecting simple escapism. Prepare yourselves for films that tap directly into recent events; which reflect and respond to the horrors we’ve all been experiencing lately. Are you sitting comfortably? Well, not for long…

French New Extremist masters Alexandre Bustillo and Julien Maury (Inside, Leatherface) are back, cranking up the claustrophobia with the UK Premiere of underwater haunted house horror, The Deep House.

Erik and Carson Bloomquist, the creative team behind last year’s elegantly retro-styled Ten Minutes to Midnight, return with the UK premiere of Night at the Eagle Inn, a mischievous mash-up of hotel-based horror and existential nightmare. Brad Baruh and Megan Leon, reteam with AJ Bowen and Sophie Barah, two of the stars of their previous Grimmfest hit, Dead Night, for the slippery sci-fi tinged neo-noir, Night Drive, a Regional Premiere.

But while it’s always nice to welcome back old friends, and see some familiar faces, they’re just as excited to be presenting some genre-shaking new talent at this year’s festival. Keene McRae, Kristoffer Thomas, and Lane Thomas reinvent the serial killer drama as an elliptical exploration of memory, loss, and small-town inertia, in the lyrical yet bone-chilling Shot in the Dark, a Grimmfest World Premiere.

A real-life conspiracy theory is the inspiration for John Valley’s blackly comic and surprisingly bleak The Pizzagate Massacre, a Grimmfest European Premiere, which combines sour sociopolitical satire with a detailed and disturbing study of disenfranchised and dysfunctional masculinity. They’ve got Southern Gothic in the manner of Ingmar Bergman, in the UK Premiere of Mark O’Brien’s stark meditation on faith, guilt, and retribution, The Righteous.

There’s witchcraft, paranoia, and possession, in the UK Premiere of Pierre Tsigaridis’s dazzling, disorientating, hallucinogenic homage to classic Seventies European horror, Two Witches. Korean director Kwon Oh-seung debuts with a dazzling reworking of a classic suspense film trope, as a young deaf woman and her mother find themselves targeted by a devious and implacable serial killer, in the fast, furious, and utterly fiendish Midnight.

Elsewhere, they’ve got the UK Premiere of two smartly subversive reimaginings of classic Hollywood scenarios: Adam Stilwell’s The Free Fall offers a surreal and slippery riff on such 1940s noir-Gothic romances as Gaslight and Rebecca, while Aaron Fradkin presents a satanic spin on Sunset Boulevard in the high camp Hollywood horror, Val.

Back in the modern world, a teenager grows ever more dissociated from reality after she invokes an online urban legend in the UK Premiere of Jane Schoenbrun’s subtly disquieting low-fi gem, We’re All Going to the World’s Fair. Reality proves equally unreliable in Stefano Ludovico’s mindblowing The Guest Room, another UK premiere, which starts as a queasily uncomfortable home invasion thriller, only to spin off into a time-twisting metaphysical parable of guilt and redemption. Unwanted guests also prove a problem for reluctant hotelier Dave, in Stefan Lernous’s sour and sweaty fever dream of alienation and repression, Hotel Poseidon, which receives its regional premiere.

And a young boy’s sense of rage and alienation summons a destructive monster in Jeremiah Kipp’s dark fairy tale, Slapface, another Regional Premiere.

Seventies European horror also provides a visual touchstone for On the Third Day, which receives its European Premiere at Grimmfest. Daniel de la Vega’s mischievous mash-up of full-blooded Latin American Gothic and classic giallo, which toys beautifully with audience expectations. The film is part of a special focus this year on Latin American Horror, which also includes the UK premiere of Andres Beltran’s chilling and claustrophobic Tarumama, which combines Colombian supernatural mythology with an emotionally brutal exploration of bereavement and family breakdown. A mysterious wild dog provides an alienated young woman with unexpected moral support in a hostile new town, in the World premiere of Sebastian Perillo’s subtly haunting dark fable, The Night Belongs to Monsters. Plus, Sartre meets De Sade in the Regional Premiere of Alex Kahuam’s nightmarish, existential vision of hell, Forgiveness.

Finally, as we begin the gradual return to some kind of normality, a reminder that things could have been a whole lot worse, with two very different, but equally chilling examinations of infection run rampant. A mysterious mutant fungus wreaks havoc among a small Mid-Western community in the World Premiere of D.M. Cunningham’s The Spore, and a virus sends the world violently, sexually insane in Rob Jabbaz’s unflinchingly brutal and breakneck shocker, The Sadness, which receives its Regional Premiere.

And that’s just the feature film premieres. There are still a few additional surprises to come, including this year’s closing feature, which they’ll be announcing once they have all the details fully finalized.

In addition, they’ll have a selection of boundary-pushing shorts from around the world, details of which will also be released soon. But just as a taster, they have revealed that they’ve got the Regional Premiere of the visually astonishing cyber-fable, Mask of the Evil Apparition, which marks Alex Proyas’ much-anticipated return to the world of the classic Dark City.

They’ll also, of course, be celebrating the career of their guest of honor, the incomparable Dee Wallace, recipient of this year’s Grimmfest Lifetime Achievement Award, with a selection of soon-to-be-announced classic screenings.

Yes, Grimmfest is back, folks. Up on the silver screen, bigger, and more blood-minded and bad-ass than ever before.

But this does not mean that they will be abandoning their arcane online incarnation. Those of you who have enjoyed having Grimmfest emerging from your computer and TV screens on a regular basis will still be able to do so. The festival will be a hybrid, with the live event closely followed by a virtual version, thus enabling those who are unable to join them physically to be there in spirit and enjoy the show from their own homes.

Simeon Halligan, festival director said: “We are so excited to be back with a live festival that is bigger than ever before. We will present movie premieres across two screens in 2021, allowing us to screen even more amazing new genre cinema. And if fans still can’t make it to the live event, we’ve an online version that will run across the following weekend. Don’t miss it!”

What do you think about the lineup for Grimmfest 2021? Let us know in the comments below or on Facebook, Twitter, or Instagram! You can also carry on the convo with me personally on Twitter @josh_millican. Dread Central is now on Google News!