The Unique Sound of Shudder’s ‘Slapface’: An Interview with Composer Barry J. Neely

He used a wide array of unconventional instruments to create the unique sound of 'Slapface'. 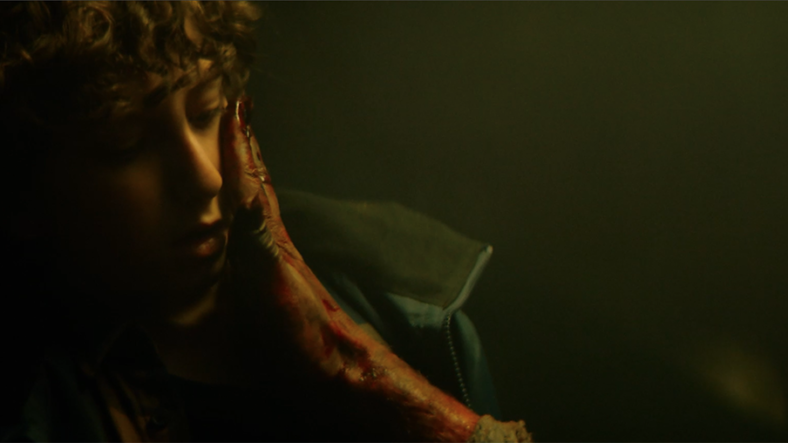 Last August we announced that Jeremiah Kipp’s Slapface would be premiering on Shudder in 2022. Now, the wait is finally over.

In case you aren’t familiar with the title, the film’s synopsis reads:

After the death of his mother, Lucas, a loner who lives in a rundown home with his brother Tom, regularly seeks solace in the nearby woods. With his only “friends” being a group of female bullies, he keeps to himself most of the time. But, after a strange encounter with an inhuman monster, Lucas begins to withdraw from others. When the two reach a tentative trust, a bizarre friendship is born, and Lucas is swept up in a series of primal adventures.

Slapface was a film festival favorite, screening at festivals such as HorrorHound and Frightfest, while taking home the ‘Audience Award’ at Cinequest. Not only has the film been recognized, but the score by composer Barry J. Neely has, too. He took home the ‘Best Score’ trophy from Manchester’s Grimmfest last October. Since the music in horror films plays such a crucial role in the storytelling process, we spoke exclusively with Neely. Below he discusses working with director Jeremiah Kipp, his love for non-traditional instruments and much more.

Dread Central: How did you get involved with Slapface?

Barry J. Neely: The director of another feature I scored, Somewhere Slow, recommended me to the producer/star of Slapface Mike Manning when they were looking for composers. I was very interested in working on a horror/thriller feature, especially after seeing the short film version of Slapface. So, I’m really glad that connection happened.

DC: How would you describe the sound of the film?

BN: The one word I always kept in mind was “off.” In our initial discussions about the music, director Jeremiah Kipp and I kept talking about how the sound should always feel a little uncomfortable. So, whenever I wrote with anything that maybe sounded too harmonious, I always did something to mess it up a little.

DC: What was your working relationship with director Jeremiah Kipp like? Did he have a pretty specific way he wanted the score to sound or did you have more room to experiment?

BN: From the beginning, Jeremiah made me feel like I could go any direction I wanted. But because it was our first time working together, it helped that he responded pretty favorably to some of my previous work. I did, however, want to keep in mind that this was a very personal project for him. So I wanted to do my best to honor his work. My job is always to reflect what’s going on in the story and with the characters. He knows that better than anyone, so his notes were always key in improving how the music integrated with the visuals.

DC: What did pre-production look like for you? What did you do to get inspiration for the score?

BN: I definitely listened to a few scores to get in the mood, but I also certainly didn’t want to mimic anything if I could avoid it. Producer Mike Manning had mentioned some small elements from a few scores he liked, and I certainly wanted to honor that. But they never got too specific.

I love experimenting with perhaps non-traditionally-used instruments for any given score. I literally typed in the words “stringed instrument” on Craigslist and saw what people were selling. I ended up buying a dulcimer, which I added frets to, as well as drilled a big hole in its back, and then distorted and bowed it with a cello bow, and a Santur, which was this absolutely beautiful Iranian hammered dulcimer I came across. But even with that, I ended up altering its hammers to get a softer sound. I also brought in a violinist I collaborate with often, Crissy J, to add some tension to the cues. It was those instruments that really help guide and shape the sound overall.

DC: Musically, do you have a favorite scene from the film? Why?

BN: My favorite scene is probably the first scene I scored. And that’s because whenever I start a score, I specifically choose the most “involved” scene I can, that way I can develop the musical ideas that eventually spread to the rest of the film. So there’s this very long music cue where Lucas encounters the Witch for the second time. The music needed to go from apprehension, to fear, to terror, to uncertainty, then ultimately to acceptance, because that’s what Lucas goes through. And at the end, Lucas sees the Witch in a very different way than he did initially, so I buried in the mix a fluttering, but beautiful sweeping chord of a Ghuzeng (a Chinese stringed instrument), and on top of that—to keep that “off” feeling—some ringing, hesitantly-played notes of the Santur. This was all inspired by actor August Maturo’s expressions as he’s looking at the Witch.

DC: Did you gravitate towards one instrument more than others for the Slapface score?

BN: Each instrument ends up having a very specific purpose. Violinist Crissy J provided the piercing “sting” and tension when I wanted it. Zehra Fazal’s vocals loosely gave the Witch a voice. The bowed, distorted dulcimer gave me a lot of raspiness when I wanted to quickly build up tension. The Santur provided a hint of melody. Then there were other elements like the rolling bass drum, a synthesized “buzz”. And finally a Tibetan singing bowl I used to add a subtle tone for the more subdued cues. Now that I say all this, there are a ton more instruments than I remember…but they all had their purpose.

DC: Horror film scores have a tendency to be more “present” and in the foreground, than scores in other genres. Did you feel that was the case with Slapface? Did you feel any extra pressure going into this project, knowing that it is in the horror world?

BN: Anytime I felt I was featuring the score too much, I pulled back. Because that’s the strategy Jeremiah and I talked about from the get-go. Sure, there are parts of the score that come to the forefront, but I always kept the instrumentation purposefully sparse. Admittedly, I was glad when Jeremiah told me to “keep going” over the finale of the film, where there was a temp song initially. By that point, I was a-okay with featuring the music.

DC: The film was awarded “Best Score” at the Grimmfest Film Festival. How does it feel to be recognized like this? Why do you think your score stood out over others who voted?

BN: That award was a fantastic surprise. The main compliment I got from the judges was how subtle my score was. Being the rhythm junky that I am, I was just proud of myself for breaking my own pattern! And Grimmfest doesn’t mess around. I was surrounded by some amazingly well-crafted films, so I felt truly honored.

DC: Your soundtrack for the film is available digitally. If you had to pick one or two favorite tracks from there, which would they be?

BN: I should first mention that the track names are taken directly from the movie dialogue.

So, if you want to hear an intense 4-minute build, go for “Sometimes Really Bad Things Happen.” If you want to hear my favorite cue that I mentioned earlier, with a ton of ebb and flow, go for “First She Was a Breeze”. But if you want the “single”, there’s always the short, but hopefully effective “Poor Little Boys”.

You can learn more about Barry J. Neely at https://www.barryjneely.com/.