We sat down with 'Stoker Hill's cinematographer John Orphan to discuss his use of darkness, found footage, and more. 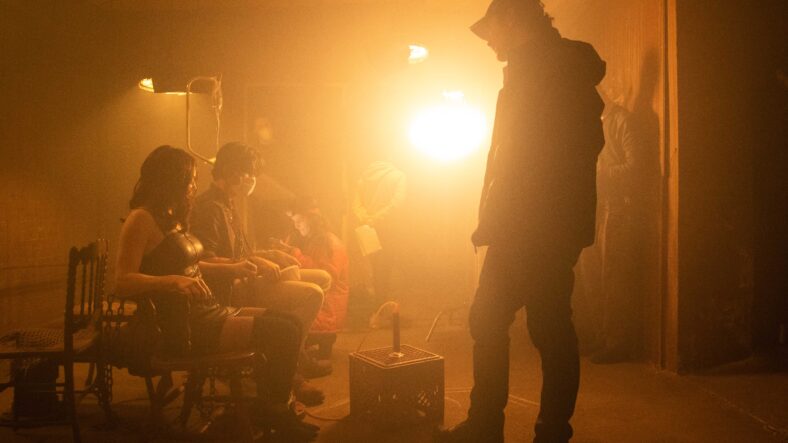 Actor Tony Todd has starred in everything from Star Trek: The Next Generation to Fox’s 24. But it’s his ever-growing horror resume in films such as Candyman, The Crow, Hatchet and Final Destination that have garnered him the most notoriety. His latest title being added to that list, Benjamin Louis’s Stoker Hills. Stoker Hills was penned by Jonah Kuehner (Good Luck Charlie) and is set in the secluded town of Stoker Hills, as three college students filming a horror movie find themselves trapped in their own worst nightmare. Their only hope for survival is two detectives who find the camera they left behind in the woods. The film also stars William Lee Scott (The Butterfly Effect), Danny Nucci (Titanic) and Steffani Brass (Six Feet Under).

An element worth noting about this film is the cinematography by John Orphan, whose use of darkness and shadows create a tone perfect for the gruesome tale. We wanted to dive deeper into the look of Stoker Hills, so we spoke exclusively to Orphan. In the below Q&A he discusses everything from how he got inspiration from David Fincher, to shooting in two different aspect ratios.

Dread Central: Can you tell us a little bit about your background and what pushed you to pursue cinematography?

John Orphan: I got really into photography in high school and I already loved movies so somewhere down the line those two interests kind of collided in my brain. I think that happened on a tiny little film that was shooting in my hometown of Grand Rapids, Michigan. I was working as a PA on that film and saw the camera department doing what they do. And I said to myself “that’s what I’m going to do.”

First, could you briefly talk about what some of your responsibilities were as cinematographer for Stoker Hills?

JO: My responsibility as the cinematographer for Stoker Hills was to support the director Ben Louis’ vision, from a technical standpoint.  I mainly ‘direct’ the lighting and compositions and try to ensure that those are in line with Ben’s vision for the final product.

There are a lot of practical and technical decisions that go into a DP and director choosing their camera for a production. What were some of those topics that were brought up for Stoker Hills?

JO: We knew we wanted the found footage portions of the film to look different enough from the rest of the film that the audience would know for certain whose point of view they were experiencing. So, most of our discussions regarding cameras and lenses revolved around that. We elected to shoot the detective portions of the film with anamorphic lenses and initially even toyed with the idea of a super-wide 1.55:1 aspect ratio. We ended up going with the standard anamorphic ratio of 2.40:1 and then using 1.78 or 16:9 for the student’s found footage.

Cinematography wise, do you think there is a different set of guidelines when working on a horror film? Lighting and camera angle wise?

JO: Yes, definitely. Generally speaking, horror films kind of ‘ask’ for a dark environment. Shadows are so much scarier than brightly lit environments. Obviously, there are exceptions to this but for Stoker Hills, we kind of leaned into the subject matter for inspiration in lighting and compositions. Our chief lighting technician, Jorge Hernandez and I were subtracting light from the set all day, every day. We needed shadows more than anything else. Some of the props that our production designer Derick Hinneman put out were so gruesomely realistic, Jorge and I needed to take the edge off of it a little so they could actually release the film later

What did you do before production started, to get inspiration for Stoker Hills?

JO: I watched a lot of David Fincher movies actually. That was one of the things Ben and I discussed as an inspiration.  We watched Se7en and had our colorist Dan Edwards create a LUT that we used on the camera and monitors that was similar to the look of many dark thrillers of the 1990s.

Stoker Hills is a mixture of found-footage and traditional filmmaking. Besides using a handheld camera, what else did you do to differentiate between the two styles?

JO: Aside from shooting in two different aspect ratios and anamorphic vs spherical lenses, we generally shot with wide-open apertures when shooting the anamorphic portions with the detectives. This makes the depth of field (the amount of space that is in focus vs out of focus) very shallow. It’s very challenging for the 1st assistant camera. Fortunately, Jason Guerrero, one of the best focus pullers in LA was handling that for us. He’s exceptionally gifted working under such conditions.

What location/set in the film was the most challenging to shoot? Why?

JO: The most challenging location I think was the forest. We had to change the location due to a snowstorm that hit the Angeles Forest the week we were supposed to shoot there. We ended up shooting those scenes in Griffith Park in the middle of Los Angeles instead. Technically it was challenging because there were a lot of rules about where we could land some of our heavier equipment, namely a 60-foot condor for some of our lights. I think more than just one location, the challenge of shooting almost a month of overnights (6 pm- 6 am) was the hardest part.

Was there anything that you did on this film from a technical aspect that you’ve not done before for anything else?

JO: I had never mixed digital filming formats before. For some shots in which it was imperative for the actor to be holding the camera for POV found footage, sometimes we would give them a small Sony A7s – DSLR, especially when they were running. I was concerned that the footage might be a little hard to work with in post because it was much different from the 6K Red Camera footage. But that wasn’t the case, fortunately.

What are some of your favorite horror films?

JO: Some of my favorite horror films are Halloween, The Shining, The Thing, It Follows, The Witch, The Blair Witch Project and Midsommar.

You can learn more about John Orphan here: http://www.johnorphan.com/. Stoker Hills is available now on digital and VOD.