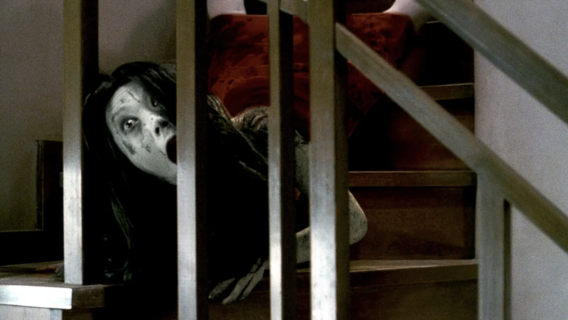 The Grudge series is iconic. For franchise fans versed in entries outside the (admittedly effective) Sarah Michelle Gellar-led 2004 remake, The Grudge series is as terrifying as it is inconsistent. Prioritizing a non-linear, ensemble approach to scares, The Grudge, otherwise known as Ju-On (translation: curse grudge), has some notably effective beats packaged together with a lot of ghost child weirdness.

With thirteen films and a television series to its credit, the series is also considerably bigger than most might realize. This wasn’t one-and-done—it’s a bonafide media enterprise. Beyond film, The Grudge encompasses literature, video games (the sweet, sweet Wii release), and numerous other forms of merchandise. Kayako and her ilk have been remarkably successful, and here, we’ll be briefly reviewing the long, storied franchise.

Filmmaking student Takashi Shimizu impressed director Kiyoshi Kurosawa (yes, that Kurosawa) with his work. He tasked Shimizu with directing two three-minute segments for a televised anthology, titled Gakkô no kaidan G. These two shorts, Katasumi and 4444444444, would serve as the foundations of the Ju-On franchise. In Katasumi, Kayako makes her first appearance, targeting school girls tasked with cleaning a rabbit cage. Actress Takako Fuji would continue to portray the iconic character until The Grudge 2, released in 2006. Toshio and his infamous, classic guttural cat noises introduce themselves in 4444444444. Shimizu would borrow several character beats, faces, and even visual motifs as he made the transition from shorts to the broader, feature-length world of Ju-On.

In 2000, two years later, Shimizu returned with Ju-On: The Curse, the first official entry in the series. Told in six parts, the disparate threads revolve around experiences in a cursed home. Takeo Saeki (Takashi Matsuyama) has murdered his wife, Kayako (a returning Takako Fuji) in blind, jealous rage. When a person dies in a state of anger and all that jazz. 4444444444 star Kazushi Ando returns, this time as Tsuyoshi Murakami, a schoolboy similarly targeted by the curse. Ju-on: The Curse is effective in spurts, positively oozing with atmosphere. Yet, too often, contrivances and a densely packed timeline threaten to tip the scare scales over into full incomprehensibility.

Luckily, Shimizu would again return the same year, this time with Ju-On: The Curse 2. Taking Friday the 13th: Part 2’s introductory recap to the extreme, the first half of The Curse 2 amounts to footage from the first, only in the end adding new context and thematic wrinkles to material audiences might have already known. Worth noting, too, is that at this point, the Ringu franchise reigned supreme. Yet, both Ju-On: The Curse and Ju-On: The Curse 2 were released direct-to-video.

Well, The Curse was the first official entry, at least until Ju-On: The Grudge was released theatrically in Japan in 2002. That was the same year Gore Verbinski’s remake of The Ring was hitting Western shores. Amounting to a remake of Ju-On: The Curse, the same iconography, characters, and motivations are retained. Though this time, there is a bit more atmospheric verve, a bit more nihilistic terror. Successful both financially and critically, Ju-On: The Grudge is truthfully the entry responsible for making the franchise, well, a franchise, despite having already had three prior entries under its belt.

Resultantly, other producers took notice. While Shimizu was releasing Ju-On: The Grudge 2 in 2003, this time following six more vignettes tied around the cursed abode, Hollywood was crafting its own 2004 remake of the first (but really fourth) entry in the series. The Grudge released to commercial acclaim in 2004. The movie capitalized on the J-horror trend, even if Western critics—much as contemporaneous Japanese critics did—compared it unfavorably to J-Horror’s other big bad, Sadako and Ring. Oh, and Shimizu himself directed the remake.

Two additional American sequels were released, with The Grudge 2 (also directed by Shimizu) getting a theatrical bow. The Grudge 3 (directed by Toby Wilkins) went straight to video in 2009. Wilkins had previously helmed three short films, echoing the franchise’s origins, in 2006 to coincide with the theatrical release of The Grudge 2. Titled Tales from The Grudge, the short vignettes previewed Kayako’s rage to drum up anticipation for the new release.

Around the same time, two simultaneous Japanese releases capped the series’ middle history. These were intended to commemorate the tenth anniversary of the series. Titled Ju-On: Black Ghost and Ju-On: White Ghost respectively, the Saeki murders are almost entirely absent, save for brief cameos and easter eggs. So, the franchise stalled. It would be several years before it course-corrected (generally speaking).

In 2014, Ju-on: The Beginning of the End was released. A soft reboot of the franchise, it again retells the story of the cursed Saeki family and their haunted abode in Nerima, Japan. A year later, Ju-On: The Final Curse released. Marketed at the time as the definitive end to the franchise (horror fans should know better), the entry wrapped with another cliffhanger. This basically all but guaranteed Kayako would be back again.

Truthfully, Kayako is the soul of the franchise. For all the various human vignettes of poor saps being killed by angry ghosts, audiences principally want to see Kayako do what she does best. And she did in 2016 with the release of Kōji Shiraishi’s Sadako vs. Kayako. Here, victims targeted by Sadako’s cursed videotape resolve to summon Sadako in Kayako’s home. The hope is to have a rival spirit end the curse for good. It doesn’t work. In the end, the two merge into a single entity, Sadakaya, and while it’s ridiculous, it’s also pretty cool.

2020 saw the last of Kayako (for now) with the release of both Ju-On: Origins on Netflix, a five-episode miniseries, a vicious (though painfully slow) origin story for various curses. Earlier that same year, Nicolas Pesce of The Eyes of My Mother fame released The Grudge. Arguably the worst entry in the series, the R-rated reboot failed both commercially and critically, once again signaling doom for the longstanding franchise. In an interview with Bloody Disgusting’s The Boo Crew, Pesce remarked an interest in exploring the franchise in other, less popular locales, though whether that will ever happen now remains to be seen.

All in all, The Grudge and Ju-On franchises are vast. Encompassing considerably more properties than audiences might be aware of, there’s undoubtedly something there for every horror fan. Ju-On: Black Ghost has some horrifying Christmas tragedy and Gakkô no kaidan G has a pretty stellar entry from the legend himself, Kurosawa. Horror is vast, consequential, and diverse. The Ju-On franchise proves that. Good, bad, or indifferent, it’s a remarkably accomplished horror franchise, one I personally hope returns soon.